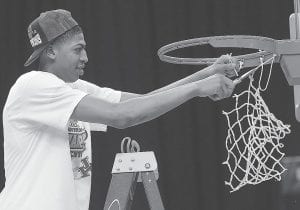 UK star Anthony Davis took his turn cutting down the nets after his team’s win in the regional tourney at Atlanta on Sunday. (AP photo)

Anthony Davis walked back into Kentucky’s hotel in Atlanta at the South Regional when a young girl approached.

“She got on her knees and bowed down to me like I was a king and said, ‘Bow to the Brow.’ She was like 5 or 6,” Davis said in an interview with The Associated Press. “I just started laughing. Man, fans of all ages, Kentucky is crazy and I just love it.”

Davis and his unibrow are a perfect fit.

He’s a fun-loving teenager who has swatted away and dunked enough basketballs to become the most dominating player in the college ranks. And that’s just in one season at Kentucky.

His steady play and calm demeanor amid the crazy fan base makes it easy to forget he just turned 19 on March 11. He’s the anchor of the Wildcats’ defense and a ferocious shot-blocker, leading the NCAA with 175 rejections.

But off the court, Davis said he’s a laid back guy who likes to pull pranks on his teammates, enjoys math and dabbles with magic.

“Off the court I’m a very cool guy, very laid back. I like to play video games,” Davis said. “I like playing pranks on people. It’s fun, livens up their spirits a little bit.

“Man, if I could play a prank every second, I would.”

The Wildcats (36-2) play rival Louisville (30-9) Saturday in the Final Four for a berth in the national title game. Tipoff is set for 6:09 p.m. Davis will play his usual pivotal role, saying he’s fine after banging his left knee in the South Regional final against Baylor.

Along the way to New Orleans, Davis has won nearly every major award and was named to AP’s All-America team this week. It’s pretty heady stuff for a kid who was just 6-foot-2 in high school as a sophomore and trying to figure out a complicated path to the NBA.

Then, an 8-inch growth spurt turned him into the nation’s most in-demand high school prospect after he just wanted to be able to consistently dunk a basketball.

“ I’m not even sure how it happened. But I’m glad it happened,” Davis said. “If I was short, I wouldn’t be able to do all the things I do now. I’m glad I got this growth spurt. Actually, one reason I’m glad is because I can dunk. I always wanted to dunk. I think that’s any basketball player’s dream.”

Now, he slams almost everything thrown his direction. He doesn’t think much about the path he laid out early in the recruiting process when his only offer came from Cleveland State. He planned to play for the Vikings, then in Europe or the NBA’s Developmental League in an effort to get noticed out of his tiny high school, Perspectives Charter, in Chicago.

Suddenly, as a 6-10 forward with guard skills, he attracted everyone’s attention and finished his senior year averaging 32 points, 22 rebounds and seven blocked shots per game.

“When I got here his sophomore year, I knew he was Division I-type player,’ said Cortez Hale, Davis’ high school coach. “I didn’t know he would be a Kentuckytype player back then. But he was determined.

“I’m very happy for his success, proving a lot of people wrong, doing what he’s supposed to do and doing it the right way.”

Davis realizes his growth spurt was the reason he caught the attention of Kentucky coach John Calipari — “ they didn’t need guards,” he says — and he’s become the anchor for a group of freshmen and sophomores favored to win the Wildcats’ eighth national championship.

“I didn’t know (success) was going to come this fast,” Davis said.

With several potential firstround NBA draft picks on the roster, Davis realizes that New Orleans will likely be the last time this group takes the floor together.

Davis said he will sit down after the season and talk with Kentucky coaches and his family about his future. Other talented Wildcats might do the same, including freshmen Michael Kidd-Gilchrist and Marquis Teague, along with sophomores Terrence Jones and Doron Lamb.

Davis said he really began to think about it Monday night

“I came into Michael’s room, 11 o’clock at night, I knew he was up and I walked in there and he was just looking at me. I said, ‘What’s going on with you? What are you looking at?’ He was like, ‘Man, bro, this is our last time playing, the season is almost over,’” Davis said. “I remember at the beginning of the year me and Mike, we were in our locker room like, ‘Man, we’ve got our first game Nov. 2.’

“I remember it like it was yesterday, like, I can’t wait for this first game. I’m going to be nervous, first chance putting on a Kentucky uniform. It was great, but now it’s about to be over.”

Not yet. There’s still some unfi nished business for Davis, who is averaging 14.3 points and 10.1 rebounds per game.

Big Blue Nation believes this is finally the year to break the title drought that dates to 1998. Davis has been awed by how the fans have gobbled up everything about the group — even what he calls the “unibrow situation.”

“When I first came here, people were like, ‘oh man, you should cut it, you should cut it.’ I was like, ‘No. I’m not. No,’” Davis said. “They embraced it. Now everybody’s got a shirt — everyone has a ‘Bow to the Brow’ shirt. The Wildcat (mascot) has (a unibrow). He even had a green one and a black one for St. Patrick’s Day.”

It’s those memories and all the little things Davis cherishes the most about Lexington. His twin sister, Antoinette, lives one building over. He’s almost inseparable with Kidd-Gilchrist. And he can even make his coach smile, thanks to a $30 magic kit.

“There’s this one (trick) Cal loves,” Davis said. “I have a little cloth and I just make it disappear and show him my hands. I just stuff inside my fist and I open my hands and it’s gone. I pull it back out and there it is. He always gets amazed by that.”

Kentucky hopes he has two more tricks up his sleeve.