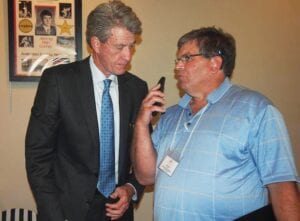 Torres wrote the book “One and Fun: A Behind the Scenes Look at John Calipari and the 2010 Kentucky Wildcats” and now covers UK basketball and football for Kentucky Sports Radio.

He said Askew as “very mature and fun to talk to” during his lengthy time with him.

“What I really liked about him is he is competitive but his maturity and the other thing I found is that he has no preconceived notions about his time at Kentucky,” Torres said. “You come to Kentucky and know the clock is ticking for the NBA. But not him.”

Askew told Torres he asked Calipari what would happen if he was not a one-and-done player. Calipari said then he simply would come back and play point guard for UK a second season.

“He has no notions that he will dominate from day one and I think that is a good thing,” Torres said. “He will compete like heck to be the starting point guard and run that team but he has the maturity to know who he is.”

Torres thinks it will help that Askew played on an AAU team with Jalen Green and Nimari Burnett, two McDonald’s All- Americans this year after their play for Prolific Prep. Green signed a $500,000 deal with the G-League.

“He is confident playing with other good players,” Torres said. “He knows his role will be to get the ball to Terrence Clarke and BJ Boston. He understands that very well coming into Kentucky.”

Stewart, a linebacker at UK, played 13 years in the Canadian Football League at defensive end after leaving UK and won four Grey Cup championships. He was the CFL’s outstanding defensive player in 2004, was a two-time all-star and had 70 sacks and 10 interceptions.

UK’s offense was led by quarterback Tim Couch, receiver Craig Yeast and running back Anthony White during Stewart’s career. Stewart enjoyed his time at UK but not the lack of focus Mumme put on defense.

“We were good. We went to back-to-back bowls. It was a great time for Kentucky football and we really enjoyed it despite not really getting to show the talent we did have on defense. We had a top 20 defense with coach Curry and (assistant) coach (Mike Archer). We were tough, played hard,” Stewart said.

“I get you have to score points to win games but there’s nothing wrong with having a great offense and great defense and we could have had that.”

Now he thinks Kentucky could have both this year after winning a combined 18 games the previous two years.

“I get you have got to score points to win games,” Stewart said. “But it is great to have a combination of offense and defense. Look at us. (Offensive coordinator) Eddie Gran is amazing. Look at what they have been doing here defensively. That recipe for winning is awesome.

“We are excited about Kentucky football right now. Our goal is to get to the SEC championship. Buy tickets. I know it is tough times, but come out and support us. This is going to be a special season.”

“The future is really bright here,” Stewart said. “The young men here know they will get pushed. Everybody has got to elevate their game. Guys have got to earn it to play.

“We are going to compete. One thing coach Stoops talks about is always competing. The players that elevate and compete at the highest level, that’s the ones we will roll with.”

Who was the most competitive, toughest player that former Kentucky All-American Kevin Grevey played with or against in college?

If you are a long-time Kentucky basketball fan, the answer won’t surprise you.

“No one from Anderson County would be surprised by this (Conner’s toughness). What you saw at UK was what we saw for four years prior (in high school),” John Herndon, former sports editor of the Anderson County News.

Grevey and Conner were seniors on the 1975 team that lost 92-85 in the national title game to UCLA in coach John Wooden’s last game. Grevey had 34 points and five rebounds in the game (he was 13 of 30 from the field) while Conner had nine points on 4-for-12 shooting, six assists, five rebounds and two steals.

Of course, that 1975 team upset No. 1 and unbeaten Indiana to get to the Final Four in one of Joe Hall’s biggest wins at UK.

Fan Paul Corio of Lexington believes Conner’s toughness was a big reason UK got to the Final Four.

“Conner set the tone for that game when he came out playing furious, physical defense against the Indiana guards,” Corio said. “Actually, down the stretch that season, the entire team was playing tenacious defense, with Conner and Bob Guyette being the leaders in toughness and physicality.”

Conner went on to play one season in the ABA for the Kentucky Colonels after turning down a chance to play in the NBA for Phoenix (he was the 18th overall pick in the 1975 NBA draft).

“He was tough in practice and games,” Grevey said. “He was our enforcer. In college nobody wanted to tangle with Jimmy Dan Conner. He would have won a fistfight with anybody.”

Herndon remembers one other historical note connected with Conner during his recruitment by legendary UK coach Adolph Rupp.

It was Conner’s senior season when Anderson was hosting Woodford County — which was coached then by Don Lane, the longtime coach at Transylvania.

“The place was jam-packed. Of course, every game, home or away was packed,” Herndon said. “Adolph Rupp had decided to come watch him play and he got there late. They stopped the game so coach Rupp could be seated.

“Several years ago I was in Conner’s office and he was laughing about that incident but, if I remember correctly, coach Rupp told him that was the last high school game he ever saw.”

Kentucky has developed quite a pipeline with North Hardin High School.

Talented defensive lineman Octavius Oxendine signed with UK in December and enrolled at UK in January. Recently running back La’Vell Wright and safety Jordan Lovett both verbally committed to UK for the 2021 recruiting class.

But two other North Hardin players — defensive lineman Isaiah Beasley and linebacker Darren Green — off last season’s 13-1 team will be preferred walk-ons for UK this season.

Coach Brent Thompson said Green had offers from some smaller Division I schools but with his academic scholarship money can attend UK to play football and not have to pay.

Same with Beasley, who has a 4.0 grade-point average and few financial worries for joining the team as a walk-on.

“He went up there for a camp and they offered him a chance to walk on then,” Thompson said. “Our defense had a lot of success last year. A lot was due to Octavius but Darren and Isaiah also had a lot to do with it.”

Quote of the Week: “We aspire to choose peace over panic, faith over fear. The truth will offend us at times, and it should. But the truth, plus grace, equals love. And we have to live out a message of love to our neighbors to live in peace,” UK athletics director Mitch Barnhart in a video message about the political unrest in our country.