UK’s Fox is among ‘the most special’ 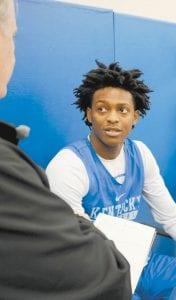 De’Aaron Fox has the skills to be Russell Westbrook-type point guard based on what Western Kentucky coach Rick Stansbury saw when he watched him in high school. (Photo by Vicky Graff )

During his time as an assistant coach at Texas A&M, Rick Stansbury got to see Houston point guard De’Aaron Fox play often.

Stansbury, who was named head coach at Western Kentucky in the spring, says the Kentucky freshman reminds him of NBA standout Russell Westbrook of Oklahoma City.

“That is the type player he is. He has special quickness. He has special athleticism. The thing he needs only time will cure and that is strength,” Stansbury said. “As far as his abilities and competitiveness, his best days will be down the road.

“As good as he will be for Kentucky in this one year they have him or whatever it is, his best days will be down the road when his strength catches up some.”

The 6’ 2-1/4” guard is up from the 171 pounds he weighed at the Nike Hoop Summit in the spring to 185 now with just 3.8 percent body fat — the lowest on the team. His other testing numbers at the recent combine UK hosted for NBA scouts were impressive. He bench-pressed 185 pounds nine times — more than most teammates. However, senior guard Dominique Hawkins did it 16 times to validate Stansbury’s point that Fox will get stronger.

“He is a great kid and will be one of the most special point guards in college basketball this year,” Stansbury said. “He can score and pass. Everybody says he couldn’t pass the ball and wasn’t a point guard. He is a Westbrooktype point guard. Those point guards now are point guards who can score. Get that ball and get it to the rim and dunk over top of you. He does that. He shoots it plenty well, too. He has a high, high ceiling.”

Most NBA scouts regard Fox as the best prospect on the Kentucky roster. Stansbury says that’s because not only he is a talented offensive player, but he has what it takes to be special on defense as well.

“He has all the ability in the world. Great lateral quickness. Again, his biggest adjustment will be just the strength level that you have to have at this level,” Stansbury said. “I have not seen him for several months and I am sure Kentucky has put a lot of strength on him and got him stronger. He is a great worker. Great kid from a great family. His dad is a guy that spent a lot of time with him at an early age and made this kid work. He has some toughness about him. He will be a special point guard on both ends of the floor. 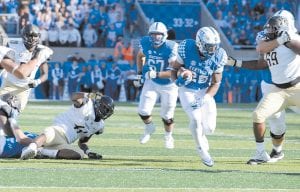 In photo at left, Benny Snell (25) impressed UK offensive coordinator Eddie Gran with his physical play on the basketball court in high school and says Snell reminds him of former Bengals running back Rudi Johnson. (Photo by Vicky Graff )

“He played against great competition in Houston, but they play so much AAU basketball yearround and those all-star games, too. He has been playing against the best for the last two or three years and that will help him this year.”

When UK offensive coordinator Eddie Gran was at Cincinnati, he knew plenty about Ohio running back Benny Snell. Now Gran is thrilled to have Snell in his backfield during his first season on coach Mark Stoops’s staff.

“I got to go watch him play basketball. And after I went and watched him, what I saw on film was just gosh, this guy makes a lot of yards and he busts a lot of tackles,” Gran said.

He says Snell reminds him of Rudi Johnson when he played for him at Auburn before going on to play eight years for the Cincinnati Bengals.

“You worried about the speed, but you know what? Rudi Johnson rushed for 1,600 yards and he just broke tackles and he was able to make jump cuts and that’s the back that Benny is,” Gran said. “When I got to see him play basketball, you could see his explosiveness in gym shorts and how he played defense and his tenacity. That’s what I liked. I watched him. I like to see how they compete in another sport.”

Gran said Snell didn’t run over anyone on the basketball court like he does on the football field.

“He bangs in there, though. But I did love his competition. He was throwing some chicken wings and getting after it,” Gran said.

Kentucky freshman Tai Wynyard is not easily intimidated on the basketball court. He grew up playing rugby in New Zealand and learned what physical play was all about.

“I stopped playing when a huge kid took me out and I did not play again,” Wynyard said. “I would not say basketball is safer because there is a lot of elbowing and punching but in rugby you just run at each other and get knocked down. There are no pads like American football.”

Wynyard’s first game at Kentucky during his redshirt season last year was against Louisville in Rupp Arena. He’s not likely to ever forget it.

“I wasn’t really ready for it. When I walked into Rupp they told me, ‘This is how it is all the time.’ People were screaming, booing. When I came to visit, it was not that loud. It was more chilled out,” he said.

Wynyard admits he misses his family, especially his mother for one specific reason.

“My mom is really a good cook. I really miss her food,” Wynyard said. “I like fried chicken, but fried chicken here is a little different. I don’t want to go to KFC headquarters for chicken.”

Isaac Humphries measured at 6’ 11-1/4” at the recent combine UK had for NBA scouts. He weighed in at 260 pounds with a 7-foot wing span. Kentucky coach John Calipari thinks Humphries can be a contributing player for UK this season now that he’s lost weight and improved his quickness.

“He’s got good skills. With his size to be able to pick-and-roll or pick-andshort roll and find pocket passes or shots that he can make. He was always pretty good in pick-and-roll defense. If you can guard the guards we’re coming at you with, you can guard anybody we’re playing against,” Calipari said. “But he’s in great shape. I watched him in high school. Literally, everything was below the rim. Everything.

“That’s why I said, ‘Ah, he might be Josh Harrellson when we first got Josh.’ Then Josh started dunking balls. Well, that’s what this kid’s doing now. Like, he does not lay any balls in. He’s trying to dunk every ball. He’s physically able to run. And the crazy thing is he’ll still be one of the youngest players in college basketball (at age 18). So basically he’s a freshman. He got an extra year last year because of his age.”

Humphries told me he followed a diet with more vegetables and less carbs to shed pounds. It was not a strict diet, just one where he had to learn to eat right. He went with low calorie drinks. He looked for a healthier option than gulping chocolate milk like he always had. He learned to really like broccoli and admitted many teammates thought he was weird because of that.

However, when you see him, you are going to see a slimmer, quicker player. “I want people to stop saying I am a backup player and bench player. I want to help this team,” Humphries said.

Why has it been so hard for Kentucky to consistently get a tight end involved in the passing game?

That’s the question I posed to former UK All- American tight end James Whalen, who had 90 catches for 1,019 yards and 10 scores in 1999. He was the second UK player to have a 1,000- yard receiving season — Craig Yeast was the first — and since then only Stevie Johnson, Keenan Burton and Randall Cobb have reached that mark and all were wide receivers.

Jacob Tamme finished his career in 2007 as Kentucky’s all-time top passcatching tight end and second in the history of all SEC tight ends with 133 catches for 1,417 yards. He’s now in his ninth NFL season.

But from 1999 until now, Whalen and Tamme have been the only two real go-to tight ends at Kentucky.

“ The game has really changed. I am biased and have always said tight end is the toughest position to play,” Whalen said. “You have to run like a gazelle and be a wide receiver at times but also block like a lineman. It’s not easy.”

Both Whalen and Tamme came to UK as receivers and were moved to tight end. Whalen joked that UK coach Hal Mumme asked him to “just cut them and then we will run away from you” when it came to the run game.

“He never asked me to do power blocking head up. That came in the NFL and then you learned to do it with good technique or you got killed,” Whalen said. “But it is a tough position. Most of the really skilled position guys that are super athletic are receivers. Some big wide receivers could be tight ends but they have never put their hand on the ground. I enjoyed it, but I was glad they were not running a lot of plays behind me. But it is just not a position everybody can play or wants to play.”

“They’ve all done a very good job. Drake is a very good player, as you know. We have some pretty good depth inside on our interior offensive line right now or else he is a guy that probably had the ability to play at an early age,” Stoops said.

“Same with Davonte. We feel like we have some corners that are doing a good job, but Davonte is working hard. He spent quite a bit of time working with the ones and twos. It was in his best interest if we could redshirt him and that’s the plan right now, but Davonte’s gonna be an exceptional player.”

Hughes came to UK not certain if he would play in the secondary or at receiver. So far, he’s at receiver.

“I love Zy’Aire’s attitude. He works extremely hard. He’s over there on scout team offense wide receiver, working against us every day. He just works exceptionally hard,” Stoops said. “All three of those guys do. They’re really great young men. Going to be great players for us. It’s good that we have the opportunity to redshirt those three. Looking forward to having those guys around for many more years.”

Same with running back A.J. Rose, another redshirt.

“You look at him physically, and he’s a monster. He’s getting stronger and stronger and he runs the ball very hard and he’s explosive,” Stoops said. “I think has the physical tools to play right now. You never who’s going to pick things up and how quickly they’re gonna do it, but A.J.’s got a bright future.

“Really an exceptional looking kid, physically he’s everything you want and he works very hard. So, again, very, very happy to have him for a lot of years around here.”