UK’s Herro much more than ‘shooter’ 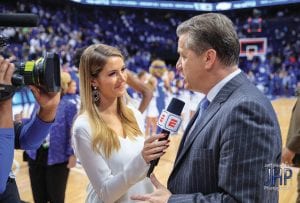 Kentucky signee Tyler Herro of Wisconsin is known as a 3-point shooter. Kentucky fans were delighted with his recruitment because John Calipari’s teams at times have lacked great outside shooters. However, Whitnall (Wis.) coach Travis Riesop says he’s much more than just a 3-point shooter.

“He’s a really good offensive player but he has also really improved his defense and loves locking people down. He’s not only a threat to score offensively, but he’s going to lock you down on defense a lot better than most people understand.”

The 6-5 guard already had four games with 40 or more points this season. He’s averaging 29.3 points, 6.6 rebounds, 4.1 assists, 2.6 steals and 1.4 blocks — all team highs — per game and shooting 81.7 percent at the foul line. He’s averaging 3.5 3-pointers per game. The numbers would be even better if he had not been hurt in the first quarter of one game and then missed two games before returning to get 34 and 41 points, respectively, in his first two games back.

“Tyler works on a lot of things other than just shooting,” Riesop said. “He has concentrated on getting stronger, more physical. He understands at Kentucky you have to take pride in more than just shooting. He’s trying to get all the parts of his game ready for that next level and he will bring a lot to the table.

“Kentucky is really getting a good player. He’s just a special kid. A lot of people have talent but he works at his game a lot. I can’t give him enough credit for that. He’s always the hardest worker on the team.

“For him, going to Kentucky is the best decision he could have made. Calipari’s style if more of a fit with Tyler’s style. That’s his personality. He wanted to go to a school that would make him the best player he could be. That’s his goal and he just realized for him Kentucky was probably the better option.”

She managed to get to Lexington in time for UK’s shoot around before the game and liked the references Kentucky coach John Calipari made to the national championship game won by Alabama in overtime the night before.

“Both of those teams (Georgia and Alabama) fought so hard and coach Calipari made the analogy to his team about playing tougher,” Rutledge said. “He said if you are not dealing with insane mental toughness on both sides of that football game, then somebody would have won it sooner. There was no give on either side.

“That’s just coach Cal showing his chops as a coach and giving respect to both of those programs and trying to challenge his team to have that same level of intensity.”

Rutledge says she knows UK basketball fans are accustomed to the “reload” that Calipari’s team has to make each year and that sometimes it clicks faster than ever. However, she likes what she’s seen from Calipari’s team.

“Watching them in practice (before the Texas A&M game), my goodness, they are overloaded with talent. It’s just getting those guys to play together,” she said. “It’s what makes coach Cal incredible because most coaches could not accomplish what he does trying to get new talent to play together. I do think they will figure it out eventually and hopefully sooner than later for Kentucky fans.

“But the league is much more talented, much stronger. It’s great for SEC basketball. I think the SEC Tournament is going to factor into a bigger picture (with the NCAA Tournament) more than it has in recent years.”

She knows how talented the top two SEC football teams, Alabama and Georgia, are and will continue to be based on the freshmen that played for both teams — and played well — in the national championship game.

“I had watched him in practice at the Sugar Bowl and leading up to the national championship and we knew that he had some packages and could run the offense efficiently, but to put him in that spot (at halftime) in the national title game is just unthinkable. Lots of coaches would not have had the gumption to do that, but it ended up working out. You could see the pure talent Alabama has, but on Georgia’s side the future is so bright, too. SEC football is not going away.”

After helping Bowling Green win the state title as an eighthgrader, Zion Harmon transferred to Adair and is averaging 32 points per game this season. He had 54 points in a win over Caverna last week and got 34 the next game.

The 5-10 Harmon attended UK’s Big Blue Madness in October and was impressed.

“They treated us so well. We (recruits) walked out, and I didn’t expect it, but everybody started clapping for us. I was walking behind Zion Williamson and Darius Garland and it was just great,” Harmon said. “I didn’t really want to smile. I was trying to act like I was just being cool, but inside there was a big smile because they were clapping for us. It was a great experience.”

He has several college scholarship offers, a ton of interest from numerous schools and a lot more offers likely to come in the next few months.

“I like the Kentucky program a whole, whole lot,” Harmon said. “I don’t want to speak too much about any colleges right now, but I do have certain ones I am leaning towards.”

One certainly is Kentucky.

“I like what my uncle said, the Kentucky program gives their kids the most opportunity to get to the league. They put so many kids in the league. I feel like it is a great program,” Harmon, a 5-11 point guard averaging 32 points per game this season, said.

His father, Mike, likes Kansas and coach Bill Self because that’s the system he has had his son play.

“Since I was young I have been running his (Self ’s) offense and that’s what developed my left hand, right hand and reads,” Zion Harmon said. “I also took a trip to Vanderbilt. There are a whole lot of colleges out here that are just great. When the time comes, I will make my decision and it will be a good one. Hopefully the best of my career.”

Troy University coach Neal Brown was an all-state receiver at Boyle County High School who went on to play at Kentucky and then UMass before starting a successful college coaching career.

He was offensive coordinator at UK for two years for Mark Stoops before taking over at Troy three years ago. He’s seen improvements in Kentucky high school football he likes.

“The quality of Kentucky high school football continues to get better. There are more fans that probably come to high school football than basketball games,” Brown said. “But the talent level of Division I prospects being produced in Kentucky is still small compared to Alabama and Georgia.

“The biggest difference between Alabama high school football and Kentucky is the commitment at the administrative level is much higher in Alabama than Kentucky overall. The thing in Kentucky is that when I was out recruiting I was shocked to see the low number of coaches in the school. It’s not like that in Alabama.”

Brown says one common problem for college football teams everywhere is declining attendance for a variety of reasons.

“A lot of fans come to games but just stay in the tailgate area,” Brown said. “We set attendance records at Troy the last two years, but we sell alcohol — and that helps. TV is great but people have some nice setups at their house. You have to do a great job from a marketing standpoint to bring people into the stadium because there are a lot of things that keep fans out of the stadium now.”

He also did radio work and loved softball — and often coached teams.

We crossed paths a lot during our work careers and he was always great to be around.

Same with Strader, the radio play-by-play voice of Western Kentucky University football and men’s basketball for 36 years. He did a Kentucky basketball postgame radio call-in show for eight years starting in 2000 while also doing his regular sports talk show in Bowling Green.

During his UK show days, he became friends with former UK All-American Kenny Walker and the two often traveled to games together to do the postgame show. They had a great onair personality and I loved being a guest on their show.

Strader has a banner with his name hanging at Diddle Arena and is the only non-player or former coach with a banner. He was also inducted into the Kentucky Athletic Hall of Fame in 2002 and the first time I actually met him was when he was broadcasting the boys’ state basketball tournament. He was cut from the same mold as legendary UK radio icon Cawood Ledford. Both were classy and the ultimate professionals.

It’s never easy to say goodbye to friends, but it helps knowing both these men did what they loved for so many years and all both ever wanted to do was bring recognition and share stories about athletes. Neither sought the spotlight but their work was so good and so passionate it was impossible not to notice, and I’m going to miss both of them a lot.

Quote of the Week:

He’s an attack dog, he gets in the lane at will and he’s also a matchup problem for bigger guys that can’t move their feet. He’s really special,” Shai Gilgeous- Alexander on teammate P.J. Washington.

Quote of the Week 2: “The first thing I said to Coach Minge when he was our volunteer assistant in 2006 was that once SEC play started he wouldn’t be as enthusiastic and positive. Well, this man has never changed. He’s still as charismatic, energetic and motivational as ever,” former UK baseball player John Shelby on coach Nick Mingione.

Quote of the Week 3: “The SEC feels like it has no true top, middle, or bottom. League is incredibly balanced. Conference’s most talented team — Texas A&M — is 0-5,” CBS Sports’ Jon Rothstein after SEC play on Jan. 13.