UK’s Knight surging when needed most 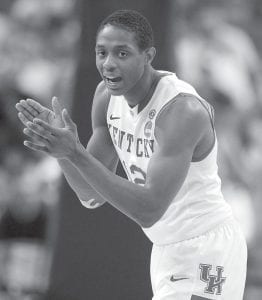 Kentucky’s Brandon Knight (12) cheered as his team pulled ahead of West Virginia during the final minutes of the second half in their East Regional NCAA tournament college basketball game in Tampa, Fla., on Saturday. (AP Photo)

Kentucky freshman Brandon Knight has spent all season trying to live up to the high expectations that come with playing point guard for John Calipari.

The expectations don’t come from Calipari, but from Knight himself.

The straight-A student is well aware everything he does will be compared to the other electric playmakers who have directed Calipari’s sometimes freewheeling dribble-drive offense, a list that includes current NBA stars Derrick Rose, Tyreke Evans and John Wall.

“A lot of people say it’s pressure, I look at is as exciting,” Knight said. “That’s why I’m here.”

Though Knight lacks Wall’s speed, Evans’ size and Rose’s gift for squeezing into tight spaces, Calipari says his latest point guard protege makes up for it in sheer tenacity.

“All the players I’ve coached, and I had guys that would live in the practice facility, literally, I’ve never seen a guy with this kid’s work ethic,” Calipari said. “His focus is on ‘where are my weak areas?’ And he goes after them.”

It’s the only way Knight knows.

And it’s why he’s been able to do something Wall or Rose never accomplished during their brief college careers: Score 30 points in an NCAA tournament victory.

It’s a destination that appeared iffy at best during a rocky regular season.

The Wildcats struggled when things got tight during in January and February, Knight in particular.

Several times he found himself with the ball in his hands and a chance to tie or win the game only to watch his final shot clang off the rim.

Knight remained undaunted, however, thanks to a mental toughness and a case of selective memory. When he misses a game-winner, he lets it go. To Knight, worrying about what might have been is pointless.

It’s why Calipari didn’t hesitate when Kentucky found itself tied with Princeton in the final seconds of their second-round game last week. He put the ball in Knight’s hands even though Knight had missed all seven of his field goal attempts to that point.

“Everybody says, ‘why would you give him the ball when he didn’t make a shot?’” Calipari said. “Because I knew he expected to make the last one and you have to give it to him. He’s not afraid to miss the last shot.”

The normally unflappable Knight admitted feeling some “anxiety” before the Wildcats played the Mountaineers, who unceremoniously ended Wall’s college career with a victory in last year’s NCAA regional final.

Knight hardly looked nervous while shredding West Virginia’s normally airtight defense. His 16 first-half points helped Kentucky stay close and his seven free throws in the game’s final 61 seconds pushed the Wildcats into the regional semifinals for the second time in as many seasons under Calipari.

As usual, Knight deflected the praise.

“My teammates continued to have faith in me even though I didn’t play such a great game” against Princeton, he said.

Maybe it’s because his teammates, like his coach, knew he would bounce back.

“If you’re a hard worker and you spend the time, you expect good things to happen,” Calipari said.

And good things happen for the Wildcats when Knight is assertive. Kentucky is 10-3 when he scores at least 20 points.

“It looks like he’s really grown into just a tremendous basketball player,” said Ohio State coach Thad Matta. “He can do a lot of different things out there.”

The Wildcats have needed every last bit of Knight’s versatility. He doesn’t have the luxury Wall enjoyed last year of playing alongside four other NBA first-round draft picks.

Kentucky needs Knight to take control with both his shotmaking and his mouth. It’s a role he is still learning how to fill.

When teammate Terrence Jones ran a play incorrectly against West Virginia, Knight turned to Calipari looking for his coach to correct Jones. Calipari told Knight to do it himself.

“I said, ‘you tell him. Why are you telling me to tell him? You’re out there with him, you tell him,” Calipari said. “And they love each other so there’s no big deal about it, and they can laugh about it later, but that’s what a good team can do.”

One that’s getting better thanks to the blossoming play of Calipari’s latest point guard.