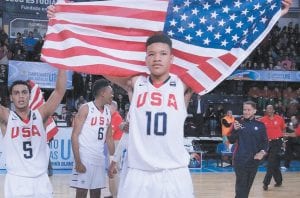 Kevin Knox fooled most of the recruiting analysts when he announced that he would play college basketball at UK — not North Carolina, Duke or Florida State as the analysts expected.

Never mind that Knox, a 6-9 player with guard-like skills, had always listed Kentucky as a possibility and that several sources at UK had continued to say they liked their position with Knox, a consensus top 10 player in the 2017 recruiting class.

The logic was that with the re- turn of Kenyan Gabriel and Sacha Killeya-Jones along with the arrival of freshman Jarred Vanderbilt and P.J. Washington that Knox could go to one of the other schools on his list and know he would get more playing time.

“I think it says a lot about who he is as a person that he wanted to go to Kentucky,” Knox Sr. said. “At the end of the day, it was his decision to go to the University of Kentucky. This was not the parents making the choice. We just oversaw his recruiting and guided him.

“It also says he is very confident in his skill set. Everybody said he would not go there because they have got so many players. What the pundits really meant is that they already had players like Kevin. But that is where they are wrong. That’s why we have a chip on our shoulders. We are not like them.

“Wearenota4(powerforward). Coach Calipari and his staff are not going to put Kevin in a box. Cal said, ‘You are a position less player.’ He can bring the ball up the floor. He will play the 2 (shooting guard). They (UK coaches) are hoping he is the guy that can replace (Malik) Monk.”

Kentucky freshman Hamidou Diallo has until May 24 to take his name out of the NBA draft, something that Tom Espinosa, Diallo’s coach at Putnam Science Academy in Connecticut, still thinks he will do even though more and more draft analysts seem to think it won’t happen.

Diallo enrolled at UK in January. He chose not to play and prepare for next season with the possibility that he might put his name into the draft to get evaluation from NBA personnel. He’s been projected as a late first-round pick in some NBA mock drafts.

Espinosa said when Diallo got to Kentucky that he felt confident he would be at UK next season. The coach said NBA scouts that came by Putnam last season told him Diallo was not skilled enough and sometimes didn’t play hard enough. But some draft analysts have praised Diallo’s motor.

“Those were the knocks on him. He’s also more suited for an up and down game than he is half-court game like you have a lot in college,” Espinosa said.

Some have questioned his outside shot even though UK players insisted it improved dramatically while he was in Lexington. Diallo said the same thing in March.

“He told me he had a great time at Kentucky even though he didn’t play,” Espinosa said. “And it was his choice not to play. He could have played and helped any team. He’s 6-6. He is freakishly athletic. He’s really long and that helps a lot on defense.

“He’ll have a decision to make but I still think he will be back at Kentucky. That was his plan when he picked Kentucky. I don’t think that is going to change, but then again he has enormous talent and potential that is really easy to see.”

The good news now for Kentucky is that if Diallo does leave for the NBA, Knox is now in the fold to help offset that loss.

There might not be a more intriguing athlete at Kentucky than freshman softball player Bailey Vick of McCracken County.

She’s had a terrific first year. She’s started all 51 games in the outfield, is hitting .343 and twice has been named SEC Freshman of the Week. Not bad for a player who describes herself as a “perfectionist nerd” because of her off-field habits.

“She is insanely intelligent, wouldn’t be satisfied with anything but an A+. But definitely a nerd in the best way possible,” Austin said.

She had a 4.0 grade-point average, the same mark she has at UK, and was class valedictorian at McCracken. Vick is an avid Harry Potter fan — just check her Twitter (@Baileyvick) home page.

“I am kind of a weird person on social media but I like to show what I like,” she said.

“No, I didn’t say that. No. No. I didn’t say that,” Vick said as she pulled the tape recorder to her to make sure it was audible. “I am kind of a nerd and like to read a lot, so I have read all the Harry Potter books and watched the movies. Just into it.

“I have always been a little different. I like to read books and school is like No. 1 really. I am dedicated to school.”

Her bubbly personality makes her easy to like. However, she admits she was intimidated by UK senior pitcher Meagan Prince when she got to UK. Blame former UK star pitcher Kelsey Nunley.

“Kelsey Nunley told me she was a little intimidating, but once get to know her… but I am not scared of her any more. But I was at first,” Vick laughed and said.

Vick is also a neat freak, which makes her the opposite of roommate Alex Martens, UK’s starting second baseman.

“We are completely opposite people but it just works. I pick up the room and she just dirties it up,” Vick said.

Could that be because Martens knows Vick will always clean up?

Kentucky freshman running back Bryant Koback suffered a horrific leg injury midway of his senior football season. The broken leg ended his season and likely cost him being Ohio’s Mr. Football in 2016.

He went ahead and enrolled at UK in January but had no contact during spring practice. However, he’s expected to be at full speed when preseason practice starts and most expect him to be in the running back rotation when UK opens the season against Southern Mississippi.

Koback admits the injury was scary.

“I didn’t look at my leg or anything at first. It kind of freaked me out. That was the first injury I ever had. I felt like I could never get hurt and you are not supposed to think you will get hurt,” Koback said.

He didn’t watch the play where he got hurt until about two months later. His reaction is not one you might have expected.

“I was mad that I did not score. I was so close to the goal line. When he tackled me I didn’t go down. I felt the pop and everything,” Koback said. “If I have the football I want to get a touchdown or 10 yards for a first down. I was focused on scoring and then lifted my leg up and the ambulance took me out of there.

“It was like a real bad pain at first. Then I must have gone into shock. When I got home and was still on my crutches, the pain was extraordinary but after a week or two it was good. It was shocking but not bad. But it’s all good now.”

Even though Kentucky and Indiana no longer play annually, the two basketball coaching staffs certainly have some interesting ties now.

Two of John Calipari’s former assistant coaches, Ed Schilling and Bruiser Flint, are on new coach Archie Miller’s staff at Indiana and both readily acknowledge Calipari has had a big influence on their careers.

“I think the biggest thing I gleaned from coach Cal is one, just how hard he got them to work. He knew the buttons to push. He knew how to push them, how to just maximize them. And I think if you see coach Calipari’s teams, you see how hard they play,” Schilling said.

“And also sitting in in recruiting visits with coach Cal, you see his charisma. You see how he connects with players regardless of their — where they are from, whether it’s a kid in the south or the north or rich or poor, he has an incredible ability to connect with them.

“I think the extent of how hard he gets them to play and how he connects with them in recruiting, and also to be able to challenge players the way he has over the years, but yet, at the end of the day, they know that he cares about them.”

Both Schilling and Flint were on Calipari’s staff at Massachusetts in 1996 when UMass (35-2) made the Final Four and lost to national champion Kentucky. Schilling went with Calipari to the New Jersey Nets as an assistant coach for one year. He landed on Calipari’s staff again for two years at Memphis (2003-04, 2004-05).

Flint was on Calipari’s UMass staff for seven seasons and eventually became head coach at UMass.

“For us, it was almost like, you grew up together, you know what I mean. You had a guy, your next door neighbor, y’all are together every day. So you experience a lot of things with each other. That’s why our relationship is the way it is today. Cal coached you hard but Cal is a big relationship guy. Those are the types of things you learn when you were young. I was 23 years old when I started work for him. It’s more than that.

“But we always play defense. We also believe, one of the things we always talked about was having post presence. We think if you don’t have post presence, you’re a little bit of a fraud. So we talk about that all the time. You know, those types of things like that.”

Schilling comes to Indiana from UCLA where he was an assistant coach last season when the Bruins split games with Kentucky.

“With coach Cal, you have certain things that he’s going to allow you to do. I’ve been fortunate to be with guys that let you run with different things,” Schilling said. “And so I’ve been at programs that have been pretty successful. When I got to UMASS, they had everything — everything was rolling. We went to the Final Four at Memphis, it was kind of a little bit of a build but it had a lot of tradition.

“There’s a lot of pressure but the bottom line is you have to do your very best to coach your players like you’d want your son coached.”

“It was about playing defense, playing with toughness, challenging the guys a little bit,” Flint said.