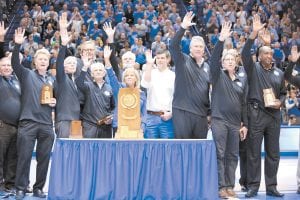 Vic Schaefer thought Mississippi State had a good defensive plan to stop Maci Morris, Kentucky’s leading scorer. He felt like the Bulldogs, who finished Southeastern Conference play unbeaten and are considered the team to beat for the national title, made Morris work for any shot she got.

Yet in Sunday’s regular-season final, Morris still went 8-for-15 from the field and had 22 points for Kentucky. It was her sixth straight game with 20 or more points, something no other UK player had ever done.

“She’s such a great player,” said Schaefer “She’s added now not just the 3-point range and big range, but she’s added the off the bounce piece. She’s really developed herself into a complete player.

“She’s very difficult to defend. She’s smart. She knows that if you’re here, she can do this. If you’re here, she’ll do this. She’s a very smart, heady player. She’s highly skilled. (Kentucky coach) Matthew (Mitchell) does a lot of runs, a lot of good stuff for her. Her teammates understand their role in trying to help her get open and allow her to be successful.” 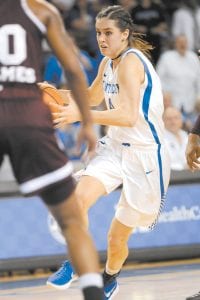 Maci Morris scored 20 or more points in UK’s last six games, something no other UK player had ever done. (Vicky Graff Photo)

Kentucky has a losing record going into Thursday’s SEC Tournament game in Nashville against Alabama, but Morris is averaging 17.2 points per game and shooting 47 percent (69 of 147) from 3-point range and 83.7 percent (82 of 98) at the foul line. She’s pulled off 3.5 rebounds per game and even blocked 16 shots. She had 35 points against South Carolina, making her only the third UK player ever to score 35 or more in a SEC game. She also led UK in scoring 19 times — and played the second half of the season with a bruised knee.

Mitchell has watched the junior from Bell County develop into one of the best players in the SEC this year when UK needed her to do far more than she had her first two seasons.

“She has command of her game, she has command of her ball handling, and she can go right or left so you can’t force her one way or another. She can make plays off the bounce with both hands and that’s very, very important,” Mitchell said. “She’s a great 3-point shooter. So, you can’t make a mistake at the 3-point line or she’ll make you pay. She’s got a mid-range game and she makes free throws. She can play out of the on-ball screen. She just has a total package offensively, skill wise, and what rounds that out is accurate shooting. She’s a very, very good offensive player.”

She’s worked to become a better leader and also understands the role her teammates have played in her success.

“When I was struggling to score some I remember KeKe (McKinney) she came up to me and told me, ‘You’re the best shooter in the SEC. You shoot it every time,’” Morris said. “All my teammates, they have complete confidence in me and just to know they believe in me, I get confidence from that and it just helps me go along with my game. I feel like my shot is working really well right now.”

One thing that has surprised her, though, is how fast three years have gone by at Kentucky. She’s already 26th on the UK all-time scoring list with 1,068 points, but says realizing her junior season is almost over is hard to comprehend.

“I swear, I feel like I just got out of high school. It flies by. I remember (former UK teammate) Janee Thompson telling me, ‘Enjoy it cause it goes by so fast,’ and I didn’t believe her cause my freshman year seemed to go so long. It has flown by and it’s crazy,” Morris said.

How would Kentucky’s 1977- 78 national championship team like to be remembered by UK fans?

“I would like people to remember us a bunch of unselfish people. A team that came out and always had one or two guys step up and make things happen for us. Just a team that was on a mission,” said Rick Robey, one of four seniors on that team.

Kentucky lost to UCLA in the 1975 title game when Robey, James Lee, Jack Givens and Mike Phillips were seniors. They were eliminated in the Elite Eight in 1977 by North Carolina when the Tar Heels used the four-corners offense after getting a lead.

“If we had won that North Carolina game nobody would have beat us in the Final Four because nobody could run with us,” Robey said. “My freshman year, UCLA should not even have been in the title game. Louisville should have won that semifinal game. With (UCLA coach) John Wooden retiring, it kind of made it tough for anybody else to win in that Final Four. But down the stretch we missed some free throws that cost us, too.”

Robey, a Louisiana native, doesn’t have any regrets about playing at UK and then his NBA career. He considers himself blessed. He’s been working in the real estate business in Louisville and the last five years his son has worked with him. Robey was with RE/MAX for 24 years before recently joining eXp Realty.

“It has been a great career and having my son with me now just makes it even better,” Robey said.

Freshman Nick Richards figured to have some growing pains at Kentucky this year, and certainly has. He’s shown flashes of brilliance but often has got pushed around by stronger opponents and has had trouble developing an offensive game near the basket.

What does he have to do to become more of a factor in postseason play for UK?

“I just think Nick needs to play confidently. Another way of saying it is get out of your own self’s way. You’re trained. You are walking in the games, playing a good game. So what happens when you step on the court. You’ve been trained, you prepared, you know you worked hard, you put your time in,” Kentucky assistant coach Kenny Payne said.

“What is happening whenever you step on that court —and it is not just for Nick; it’s for any kid — if you will put your work in, the hours and the days before we play our game and you are feeling good about yourself, what happens when you are in the battle? What changed in your mind mentally that made you have self-doubt? That’s what the challenge is with him. He’s a good player and he needs to go out there and believe in him the way we do.”

Richards is averaging 6.2 points, 5.0 rebounds and 16 minutes per game. Kentucky coach John Calipari says Richards has to remain ready because there will be games where UK needs his size.

One of the stars already in Georgia’s 2019 football recruiting class is five-star receiver Dominick Blaylock of Walton High School in Marietta, Ga. The 6-0, 175-pound Blaylock is the nation’s No. 2 receiver and No. 10 prospect overall in the 2019 class in the 247Sports.com rankings. His first scholarship offer came when from South Carolina when he was in the eighth grade.

If that name sounds familiar to you, it should. His older brothers, Daron and Zack Blaylock, played football at Kentucky. They signed when Joker Phillips was UK’s coach and also played under coach Mark Stoops. However, he never had a scholarship offer from Kentucky despite having two brothers that played at UK before leaving prior to their final season of eligibility.

Georgia also has a 2019 verbal commitment from in-state receiver Jadon Haselwood, the nation’s No. 1 receiver.

Toronto Raptors coach Dwane Casey, a former UK player and assistant coach, got to have Cleveland superstar LeBron James on his team at the NBA all-star game. Casey joked he was now jealous that he didn’t get to coach him regularly.

“He’s a joy to coach. He’s a coach’s coach. He reiterates exactly what should be said, the right things. No BS,” Casey said. “In the huddle, defensively, he got the guys jacked up and juiced up as far as wanting to get a stop.

“So everything he says, if he says that, or any great players say that, you want to go with them because it was their idea, their belief, and he had it. My hat’s off to him.”

Kentucky baseball coach Nick Mingione says his team faces a “challenging” three games in Houston this weekend against Houston, Sam Houston State and Louisiana-Lafayette in the Shriners Classic at Minute Maid Park, the home of the world champion Houston Astros.

“Great competition, another way for us to develop them as people, and then we’re going to welcome Texas Tech here to play a series (March 9-11), who’s ranked in the top five in basically every single major poll, right. So when you start thinking about the level of competition, we have another demanding schedule, and that’s important to me because not only for RPI, but if we’re going to face some adversity, I want it to be hard.

“Let’s get it out early. Let’s get to the point and let’s challenge and let’s just continue to grow, so our schedule is going to be another very, very difficult one. But I don’t want it any other way.”

That’s because UK, which was ranked No. 8 going into the season, has the College World Series as its primary goal this season.

Quote of the Week 1: “People used to always say I was just a shooter. When I was in college, that’s really all I did was spot up shots. Once I got to the NBA, I adjusted and showed a little bit more than people said. I was a scorer that could shoot. But I like to think of myself as a an elite shooter for sure,” former UK player Devin Booker after winning the NBA 3-point contest.

Quote of the Week 2: “They never think about the basketball side. The Dominican Republic has been doing an amazing job bringing up its talent and giving them the right resources so they may have a chance to be in the NBA,” former Kentucky star Karl-Anthony Towns on the Dominican Republic having two players (Towns and Al Horford) in the NBA all-star game.

Quote of the Week 3: “People are always going to have their perception of what you are and what you say at any point in time. I always speak my mind,” former Kentucky star John Wall of the Washington Wizards on why so many critique every tweet he makes.