UK’s Miller hopes funk is over 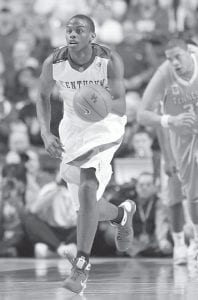 Kentucky guard Darius Miller brought the ball up the court against Tennessee in Lexington on Feb. 21. Miller helped lead the Wildcats to a win. (AP Photo/Ed Reinke)

Darius Miller caught the ball on the baseline, maybe 10 feet from the basket midway through the first half of Kentucky’s 77-58 win over Tennessee on Saturday and was shocked by what he saw.

No defender running out at him. No hand in his face. No double-team. Instead, the Volunteers barely paid any attention to the Kentucky freshman.

Miller, shrugging his shoulders almost, calmly knocked down the shot.

“There wasn’t anything else I really could do,” Miller said with a laugh after pouring in a career-high 17 points.

He can afford to smile about it now after a rocky three months in which the play of Kentucky’s reigning Mr. Basketball failed to match the hype.

Miller chose the Wildcats over Tennessee, Louisville and Florida among others even though he knows how harsh the spotlight can be for homegrown players at college basketball’s all-time winningest program.

It’s a challenge he willingly embraced, though one that overwhelmed him early on.

He struggled to understand coach Billy Gillispie’s offense, looking lost at times on the floor. Even worse was his play at the other end. Gillispie isn’t exactly a big fan of throwing freshmen into the mix, particularly ones that don’t play defense. He jokingly referred to Miller as “Arius” — as in, no ‘D’ — for weeks.

Miller found himself constantly wondering about his role as Gillispie kept tinkering with the lineup. Miller would play 34 minutes on game, then barely get off the bench the next.

“It was a tough transition,” Miller said.

One that he finally appears to be through thanks to a little help from role model turned friend Chris Lofton. The former Tennessee star — who like Miller was named Kentucky’s Mr. Basketball after a spectacular season at Mason County — has become Miller’s sounding board.

The two text often, even with Lofton playing professionally in Turkey this year. Lofton returned home long enough, however, to watch Miller make all six of his field goals — including three 3- pointers — as the Wildcats swept the season series from Tennessee for the first time in four seasons.

“(Lofton) gives me a lot of advice,” Miller said. “He talks to me every now and then, trying to build my confidence and everything. Giving me a little help, tips, stuff like that.”

Whatever they’re talking about, it appears to be working, and just in time for Kentucky (19-8, 8-4 Southeastern Conference), which heads to South Carolina (19-6, 8-4) tonight (Wednesday) hoping to keep pace atop the crowded SEC East.

The Wildcats have been carried most of the year by stars Jodie Meeks and Patrick Patterson. While Gillispie has brushed aside chatter that Kentucky needs a viable third option when their big guns are having off nights, even he admits now he expected Miller to fill that role all along.

“He’s been making strides,” Gillispie said. “It’s great for a guy like him to have a bust-out game like that for what it can do for him the remainder of the season.”

Miller, however, isn’t getting ahead of himself. There have been a couple of games this season where he thought he’d finally broken through only to stumble back to reality. He scored 12 points in the season-opener against VMI, then turned it over five times in 13 minutes against North Carolina. He had seven points and five assists in a gritty win over Mississippi State, then played just 11 minutes and did barely anything against Florida.

Even worse was the apparent lack of respect he’s been given by opponents. Teams have become so focused on stopping Meeks and Patterson they’ve left the rest of the Wildcats largely unguarded, all but daring them to take the shot.

It can get a little unnerving. Miller has found himself all alone so often this year it’s almost made him gunshy and shaken his confidence.

“It was kind of shocking at first,” Miller said. “I didn”t really know what to think about it when they were backing up that far. It’s not like they were just giving us a step. They were playing all the way off of us.”

And why not? Miller entered the Tennessee game shooting just 36 percent from the floor and 24 percent from 3-point range. Most of those shots were wide-open looks with nobody around him.

All that space can mess with the head of a player used to getting the kind of attention in high school that opponents now reserve for Meeks and Patterson.

Rather than treat all that space like a burden and worrying about messing up, Miller has decided it’s time to just go out and play. All six of his shots against the Volunteers were decisive, no pausing or wringing of hands necessary.

It’s the kind of play the Wildcats will need if they want to make noise in the SEC tournament and beyond.

“Coach has been talking to us about being aggressive to start helping out Pat and Jodie,” Miller said. “They’ve been carrying us the whole year and I think it’s about time we come out and help them out.”