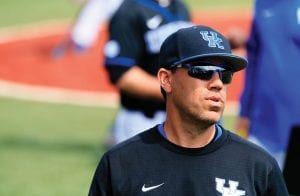 The University of Kentucky came up just short in its quest to win the Southeastern Conference regular season baseball championship, but that didn’t keep Coach Nick Mingione’s fellow coaches from naming him the SEC’s Coach of the Year for 2017. Mingione also deserves the title of national coach of the year.

Kentucky did not win the Southeastern Conference regularseason baseball championship, but that could not keep Nick Mingione from being named SEC Coach of the Year by his fellow league coaches on Monday. In fact, one could make a strong argument for him being national coach of the year.

Going into this week’s SEC Tournament, Kentucky already had 38 wins — the most since a school record 45 five years ago and the sixth most in school history. The 38 wins are the most for any first-year UK baseball coach.

Kentucky was picked near the bottom of the SEC in preseason polls yet came within one win of being league champion. Regardless of what happens in this week’s SEC tourney, UK should be a national seed in the NCAA Tournament and get to host a regional.

That was more than enough to be SEC Coach of the Year and a few more wins has to have him in the conversation for national coach of the year.

If the American Football Coaches Association has its way, college football players would be allowed to play in four games and still be able to count that as a redshirt season.

Most coaches already seem to be in favor of the potential change, including influential Alabama coach Nick Saban.

Kentucky coach Mark Stoops likes the proposed change and would have liked to have had that option last year when starting quarterback Drew Barker got hurt. Stephen Johnson became the starter but because Stoops wanted to redshirt freshman Gunnar Hoak, he did not have him play any as a backup.

“We decided to keep that redshirt on Gunnar Hoak in game 11 and played our third-team quarterback who did some good things, but anyway, it was a situation where it could’ve benefitted us a year ago,” said Stoops. “I think it makes a lot of sense. It can protect the player and the redshirt year, help gain a little bit of experience for the following year.”

Could coaches take advantage of this rule? Sure. Could players benefit from this change? Absolutely.

I reached out to several people who could be impacted — or would have been impacted — by this change to gauge their feelings.

“I think that would be one of the smartest things the NCAA has done honestly … it would give people like (UK defensive back) Tobias (Williams) and me and many other kids a chance to show if we can handle it as freshman or not without ruining our redshirt,” said Ohio junior defensive end Alex Reigelsperger, a 2018 UK commit.

“It would also allow people to play when a team is up or down by a lot (of points). I think it would be just absolutely amazing to have that happen. I really do.”

Good point about lopsided scores. If a team is up 35 points, or down 35 points, in the second half, this proposed change would allow a coach to play a potential redshirt player a bit to gain experience — and also keep from running the score up on the losing team.

Anthony Williams’s son, Jarren, is another 2018 commit. The Georgia quarterback had scholarship offers from Alabama, LSU, Georgia and many more.

“I think this is an awesome rule because it gives a player an opportunity to be developed at the same time they are able to gain game experience that would be significant to the football program for the next year,” Anthony Williams said. “This would be a win for the program and the player.”

Holly Hoak, Gunnar’s mother, thinks the potential change has a lot of positives and notes how UK’s options were limited last year after Barker got hurt.

“If he (Gunnar) had been able to play without penalty, he could have gained valuable experience, possibly helped the team out, all without losing that fifth year,” Holly Hoak said.

She also has another valid concern.

“On the other side, I don’t think the rule should lead players to believe it’s a ‘free for all’ where guys are thinking that everyone should get an opportunity to play. Some guys truly need that freshman year to adjust to the game — both in the weight room and learning the playbook,” Hoak said.

“I think the new rule should be on an individual basis. If it passes, I trust that coach Stoops will have the individual’s best interest in mind and what’s best for the team.”

Former Kentucky quarterback Patrick Towles didn’t have a fourgame option his redshirt season. He spent his redshirt year walking the sideline knowing he would not play.

“I think it is a really fine line (about the four-game proposal),” Towles, who played his final season at Boston College, said. “I would just rather give a player five years of eligibility in the first place. And take out the redshirt all together.”

Most players probably would agree with that. Florida coach Jim McElwain would, too.

Former Kentucky quarterback Freddie Maggard, now an analyst for Kentucky Sports Radio as well as the UK Network, worries the rule “is meant to be manipulated” like other NCAA rules.

”Most likely, bowl folks had a say so in this one due to (LSU’s Leonard) Fournette and (Stanford’s Christian) McCaffrey skipping bowl games to prepare for the NFL,” Maggard said. “Perhaps the allure of an unseen (redshirt) future star could sell tickets and bring eyes to TV’s.

“However, I’m actually okay with this new rule. Five (years) to play four will stay intact, but now leeway is allowed for special circumstance. But, I’ve been saying this for a year now, until the size of support staff and non-coaching coaches are regulated, the NCAA’s credibility in football circles remains cloudy. Competitive advantage due to finance scenarios must be eliminated.”

Finally, I wondered how DeDe Haynes would feel. Her son, Nick, will be a fifth-year senior offensive lineman at UK this fall. He recently graduated and will have a fifth year to work on another degree or certification.

Even though the rule would not help her son, she thinks is a “wonderful” proposal.

“Definitely good news for the player and coach because it provides our freshmen with the opportunity to conduct a self-assessment of their athletic skills as well as their mental capacity in a realtime fashion,” she said. “Although practice may make one’s skill set better … blocks, pancakes, snaps, catches, etc. in real-time provides the player with a playbook of improvement areas in order to make their game perfect,” she said.

“It also gives them the opportunity to take advantage of the fifth year of academia, thus capitalizing on their true purpose of being in college … education,” DeDe Haynes said.

“When you read Bamba’s Player’s Tribune article, it’s obvious that basketball was only one part of the equation in making his decision,” Peek said. “I think with a place like Kentucky and Duke there’s so much emphasis on the basketball part since those two schools are powerhouse programs.

“At Texas, it gives him a little time to find his own place on the court without as much pressure. With Kentucky or Duke he would be fighting for minutes and for touches on offense since both teams are already loaded.

“Bamba will be coming in with four-star point guard Matt Coleman and that’s the best case scenario Shaka Smart could have hoped for.”

Not many expected Kentucky’s softball team to do what it has this season. The Wildcats won three games in NCAA Tournament play over the weekend in Lexington to advance to this week’s Super Regional at Oregon. The Wildcats will take a 39- 17 record to Oregon after giving up just two runs in NCAA play — and none in the first 19 innings.

“We are better now than we were then,” Martens, who drove in five runs in her first three NCAA games, said. “We could have won that game but we know we can go and win.”

Coach Rachel Lawson, who has just one senior starter in her everyday lineup, says UK’s unpredictability could be a big advantage in the Super Regional.

“I think that we’re starting to peak at the right time. If you would have asked me this a month ago, I would have said we’ve got a lot of work to do. But I think that right now, because we’re getting production in all parts of the lineup, we are better,” Lawson said.

She noted how she had no hesitation to start Erin Rethlake on the mound in game three last weekend rather than go with star Meagan Prince for a third straight game.

“The fact that I knew I could do that really says a lot. A few years ago, when we first started going to Supers, I really didn’t have a lot of options on the mound as much and we thought we would have to trick people. Now we’re O.K. just kind of going out there and playing our game,” Lawson said.

“So I feel good. I think the team is equipped. I think that Katie (Reed) has settled into the leadoff spot. If Abbey Cheek is seeing the ball and Brooklin (Hinz) continues to play well and Alex stays within herself, I think that we have a lot of options offensively as well. So I think we can be pretty tough. And our defense — overall we’re playing really well right now.”

Kentuckian J.B. Holmes had a great chance recently to win the Players Championship, which would have been his first major championship. He was tied for the lead going into the final round, but the former UK golf standout shot a 12-over par 84 in the final round

I knew not only how disappointed Holmes had to be, but also his family

“Everyone has awful days at work, But no every one has there bad day televised,” Holmes’s sister, Amanda Rowland, told me. “He is an amazingly resilient person. I’m sure he’ll bounce back. They just need a few days to be ticked off and disappointed.

“Our God is great and something good always comes out of something bad. There is always a silver lining, sometimes you just have to look very, very hard to find it.”

Holmes will bounce back. He always has, always will.

Just look at what Holmes had to say a day before the final round when he had no idea what would happen.

“You know, it’s a golf tournament. It’s a huge event, don’t get me wrong, but in the end, it’s just golf, and hopefully I can go out there and play well and win, and if I do, my life is not really going to change,” Holmes said. “I’m going to load the car up and go to next week and play next week, and we’ll live in the same house and I’m going to drive the same car.

“Don’t get me wrong, I would love to win, and it would be awesome. Such a cool tournament, and to be able to lift that trophy would be amazing, but I’m not going to dwell on everything.”

That kind of attitude from Holmes and his sister, though, shows why he’s so beloved by Big Blue Nation.