UK’s ‘Mr. Wildcat’ beloved by many 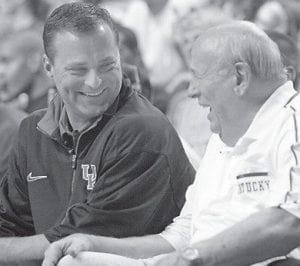 Bill Keightley, who died Monday at age 81, shared a laugh with UK Coach Billy Gillispie this past season. (AP photo)

There were days when Ramel Bradley would trudge onto the practice court at Kentucky and just be out of it. No energy, no bounce, none of the confident swagger that defined the scrappy guard’s career.

Then Bradley would walk over to longtime Kentucky equipment manager Bill Keightley, and the man who sat on the Wildcats bench longer than anyone in program history – Adolph Rupp included – would tell him to snap out of it.

“If I was upset or feeling some kind of way, when you walked in, he was going to grab you up and hold you real tight and tell you, ‘You’re my boy, Little Smooth,'” Bradley said. “He made me feel like I was his favorite, and the thing about it is, he made everyone feel like that.”

Keightley’s nearly boundless energy made his death on Monday night all the more shocking to those who knew him, which was nearly everybody associated with Kentucky basketball since Keightley became involved with the program in 1962. Keightley passed away in Cincinnati at age 81 from internal bleeding caused by a previously undiagnosed tumor on his spine. 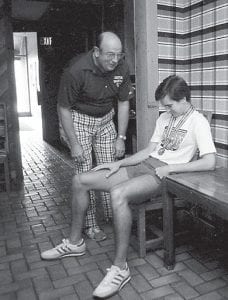 A public viewing and memorial service will be held at Rupp Arena on Thursday, underneath the retired jersey for the man dubbed “Mr. Wildcat” during his 48 years on the bench.

Even as he aged and developed a staff – mostly undergraduate students – of his own, Keightley would still push the laundry cart around the court during practice, picking up discarded towels and shirts.

“He had a great amount of pride, making sure their shoes fit the way he wanted them to fit,” Gillispie said. “I mean, you talk about preparing to win, he prepared to win and he was spending his time when our season was over trying to get ready for next year, he’s a champion, no question.”

Keightley saw plenty of championships during his time with the Wildcats. Kentucky won 1,113 games with Keightley on the sidelines, including two national championships.

Yet Keightley’s importance to the program transcended basketball. His amiable nature made strangers feel at ease, yet those who knew him best held so much respect for him they referred to him as “Mr. Keightley.”

Though Keightley held a healthy dislike for rival Louisville, he remained friends with former Kentucky and current Louisville coach Rick Pitino, attending Louisville’s win over Tennessee in the NCAA regional semifinals after the Wildcats were eliminated from this year’s tournament.

“Mr. Keightley has been a confidant to so many coaches that have had the good fortune to sit alongside him,” said former Kentucky coach Tubby Smith, now at Minnesota. “That is what it has been, us sitting next to him, not him sitting next to us. No one will ever love Kentucky basketball more than Mr. Keightley.”