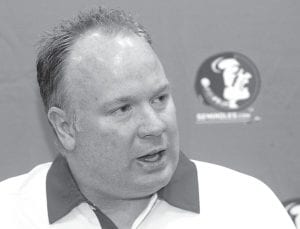 New Kentucky head football coach Mark Stoops, 45, is currently the Florida State defensive coordinator. He is shown here in August during the Seminoles’ football media day in Tallahassee, Fla. Stoops’s goal has been to become the third brother in college football’s famed coaching family to lead his own program. And as the leader of nation’s second-ranked defense, his résumé was more sparkling than ever. (AP Photo/Phil Sears)

Stoops replaces Joker Phillips, who was fired on Nov. 4. Phillips went 13-24 in three seasons at Kentucky and the Wildcats were 0-8 in the Southeastern Conference this year.

Kentucky made the announcement on Tuesday and the 45-yearold Stoops will be introduced here at a news conference on Sunday. No. 13 Florida State (10-2) plays Georgia Tech Saturday in the Atlantic Coast Conference championship game.

Stoops’ hiring concludes a quicker-than-expected coaching search by the university. After Saturday’s season-ending loss at Tennessee, Kentucky athletic director Mitch Barnhart said he had no timetable to find a replacement for Phillips.

But it didn’t take long for Barnhart and the Wildcats to make a move. The decision makes Stoops a head coach for the first time in his career.

“I want to thank (Kentucky) President Eli Capilouto and Mitch Barnhart for this opportunity,” Stoops said in a statement. “I promise the faithful of the Big Blue Nation I will be focused and driven to create a positive, winning atmosphere for the program and an environment that all of Kentucky can be proud of.”

Florida State coach Jimbo Fisher said after the Seminoles’ practice Tuesday that Stoops will coach Saturday’s game but that he hadn’t talked with him about coaching through a bowl appearance. Stoops did not talk to reporters after the workout.

Bob said his advice to Mark is to trust his instincts.

“When you get one of those positions, everybody wants to tell you what to do,” the OU coach said. “That’s how it was for me. I didn’t let anyone hurry me. I took it at my own pace, trusted my guy and my instincts on what I wanted to do, and fortunately it worked out.”

Mark Stoops has been the Seminoles’ defensive coordinator the past three seasons. Florida State’s defense was ranked 108th when he took over and he has turned the Seminoles into one of the nation’s top defensive teams.

The Seminoles have the nation’s second-ranked defense, giving up 249.4 yards per game. Kentucky allowed 391 yards a contest this season and ranked 11th in the 14-team conference.

“Our desire to get better defensively and continue to expand our recruiting base helped guide us to Mark,” Barnhart said. “He comes from a coaching family and has been in big games and big atmospheres throughout his career.”

Now Stoops’ challenge will be making Kentucky competitive in the conference that has won the last six BCS national championships.

The Wildcats are coming off their third straight losing season and second without a bowl appearance. Seven of their eight conference losses this season were by margins of at least two touchdowns, including a 40-0 blowout at home to Vanderbilt on Nov. 3 and a 37-17 season-ending loss at Tennessee on Saturday.

Stoops has a proven track record of rebuilding defenses, which represents a philosophical shift from the offenseminded Phillips.

Before joining Fisher’s staff, Stoops resurrected an Arizona defense with similar issues that Kentucky experienced. Arizona was 109th in total defense before his arrival; the defense was ranked in the top 25 in his final two seasons and Arizona earned consecutive bowl bids.

Stoops leaves a Florida State program poised to claim a BCS bowl bid if it wins the ACC championship on Saturday. The Seminoles enter the ACC title game with the nation’s seventhranked scoring defense, allowing 15.1 points per game.

Fisher said it’s a compliment to the defensive players at Florida State that Stoops “got the shot because of how they played and how he coached them.”

“I’m very proud of him. Very happy for him,” Fisher said after Florida State’s practice Tuesday. “He got an opportunity to go on and further his career and it’s something he wants to do. … We wanted Mark to stay here for a long time until he got what he wanted to do. Our players are very elated. They know that that’s part of this business.”

“Everybody knew he wanted a head coach job,” Werner said. “Everybody was happy for him. Nobody was like sad that he was leaving. … He did everything he could. He turned a great defense into an even better defense.”

The search for Stoops’ successor will begin next week and Fisher hinted that it could be an internal hire.

“There are possibilities of that all the time,” he said. “We have some great coaches underneath.”