UK’s next opponent is Louisville 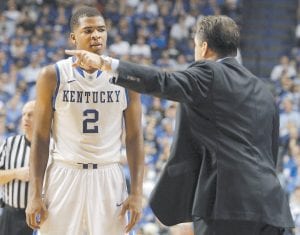 Kentucky’s head coach John Calipari instructed Aaron Harrison (2) during the second half of Kentucky’s 93-80 win over Belmont Saturday in Lexington. Julius Randle scored a career-high 29 points to lead UK, while Aaron Harrison added 23 and Willie Cauley-Stein had 16. The Wildcats won’t see action again in until Saturday (Dec. 28) when they host Louisville at Rupp Arena at 4 p.m. The game will be televised nationally on CBS. (AP Photo/James Crisp)