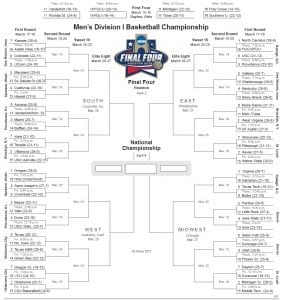 Kentucky should have been a No. 2 seed.

Statistics genius Nate Silver has calculated the chances of each of this year’s NCAA Tournament participants winning it all, and the Wildcats are ranked seventh with a four percent chance. Based on that, they should easily have been a two seed.

The biggest mismatch of all, though, is Oregon, which is ranked 10th, which should have made the Ducks a three seed rather than a top seed.

This year’s tourney will be more interesting than usual because there is no dominant team. The tournament championship will go to one of several good teams that can avoid injuries and is consistently hot for the entire two and a half weeks of the event.

For example, the top three teams’ combined chances of winning it all total only 44 percent, barely above the 41 percent chance that Kentucky alone began with last year. With that total being less than 50 percent, it is unlikely that any of the top three teams will be the winner. It is truly wide open.

Other teams interesting to local fans are fellow Southeastern Conference member Texas A&M, which is ranked 11th with chances of two percent. The Mountaineers of neighboring state West Virginia are ranked eighth at three percent. Duke is 11th at two percent and the neighboring Indiana Hoosiers are 13th with a one percent chance of winning it all. Vanderbilt and Wisconsin are way down the list. Unfortunately Louisville will not be participating this year; they were one of the best teams in the country.

Last year I noted Nate Silver’s comment that only about a third of the No. 1 teams going into the NCAA Men’s Basketball Tournament win it. More recently he has written that 20 to 25 percent of them do.

Most interesting to me in the early rounds are these two questions: which are the top teams knocked out, and which are the lowest ones surviving? After all, this is why we play the games. If the favored team always won there’d be no reason to play the games. In essence, it’s the upsets we fear — or hope for — in a single knockout tournament.

The situation will be much more interesting after Thursday’s games.