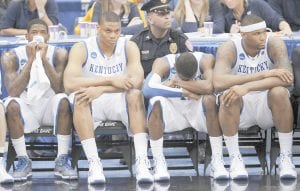 Kentucky’s DeMarcus Cousins, right, and John Wall, second from right, reacted with teammates Daniel Orton and DeAndre Liggins during the last minutes of the final game in the East Regional of the NCAA college basketball tournament against West Virginia on Saturday in Syracuse, N.Y. West Virginia won, 73-66. This week, Cousins and Wall were selected as first-team members of the AP All-America team. (AP photo)

It didn’t take long for John Calipari to deliver on his promise to restore the roar at Kentucky.

In Calipari’s first year on the job the Wildcats went 35-3, won the Southeastern Conference regular season and tournament championships and spent the entire season ranked in the Top 5 — heady territory for a program that spent the last decade slowly slipping from the national scene.

Yet all the victories, all the breathtaking plays by freshman star John Wall, all the style and energy college basketball’s highestpaid coach brought to one of the nation’s toughest jobs couldn’t quite get the Wildcats back to the Final Four for the first time in a dozen years.

Kentucky’s comeback season ended under an avalanche of missed 3-pointers in a 73-66 loss to West Virginia in the NCAA regional finals on Saturday, a dubious end to a remarkable year in which Calipari pulled off one of the quickest turnarounds of all-time.

A year ago, Calipari left Memphis to take over a wounded program that failed to make the NCAA tournament. Even as he cautioned fans not to get carried away, he brought in the best freshmen class in recent memory and rode it to within 40 minutes of the Final Four.

He made no apologies along the way. Not to the half-dozen players who either left the team or transferred after he took over. Not to the seven holdovers from the Billy Gillispie era, most of whom saw their playing time decrease while Calipari turned to freshmen such as Wall, DeMarcus Cousins and Eric Bledsoe.

It was a new day. The best players were going to play, regardless of their age. And while Kentucky’s lack of tournament experience showed against the Mountaineers — particularly the way it struggled to stay poised in the face of West Virginia’s 1-3-1 zone defense — Calipari refused to make excuses.

“I think there were times that the inexperience, you know, hurt us,” Calipari said. “Let me tell you, it also got us to where we are today with 35 wins. I mean, that same youth.”

And next year, he’ll likely have to do it all over again.

Both were vague when asked about their respective futures on Saturday night, instead focusing on an opportunity lost.

“It’s pretty tough,” said Wall, who finished with 19 points before fouling out in the final minute. “We had goals as a team. We wanted to make it as far as we wanted to and that was the championship. We got it cut short.”

Cousins, who evolved from a raw and somewhat volatile talent into arguably the best big man in the country, struggled to keep his emotions in check. He and Wall sat glumly next to each other on the bench as the final horn sounded and he fought back tears in the locker room.

Cousins and Wall probably won’t be the only ones out the door.

Junior forward Patrick Patterson, who will graduate in May and participated in Senior Day festivities at Rupp Arena earlier this month, is also likely gone. There’s even a chance Bledsoe and freshman center Daniel Orton could be right behind him.

If they all go, Calipari will have to find a way to replace four starters. Reinforcements are on the way in the fall — the Wildcats are expected to again have one of the top incoming classes — but it will be difficult for whoever comes in to duplicate the sizzle provided by Wall and company.

Then again, maybe missing the Final Four did Calipari a favor in a way.

Tubby Smith won a national title in his first year on the job in 1997-98 but never made it back to the Final Four before bolting for Minnesota in 2007.

At least Calipari has room to grow. Not much, though.

Kentucky started the season with Wall being forced to sit out two games — one an exhibition, the other the season opener — by the NCAA for accepting improper benefits from his AAU coach.

No biggie. He hit a game-winner against Miami (Ohio) in his regular-season debut, and things only got better from there. Kentucky won its first 19 games, briefly rose to No. 1 and became the first school to surpass 2,000 wins.

The Wildcats knocked off Connecticut, North Carolina and rival Louisville and became humanitarians all the while. Calipari helped raise more than $1 million for earthquake-ravaged Haiti with his “Hoops for Haiti” telethon and the team received a congratulatory phone call from President Barack Obama as a result.

Obama wasn’t the only star checking on the Wildcats.

LeBron James showed up for a game. So did Ben Roethlisberger and Mike Tomlin. Actress and Kentucky native Ashley Judd became a fixture again in the stands, often sitting a few rows behind the Kentucky bench in a white T-shirt.

Yet they all stood in the shadow of Calipari, who in 12 dizzying months brought the swagger and the spotlight back to the Bluegrass.

It’s a role Calipari seems to revel in. Good thing, because the road only gets more difficult from here.