UK’s Stenberg must be the ‘nastiest’ 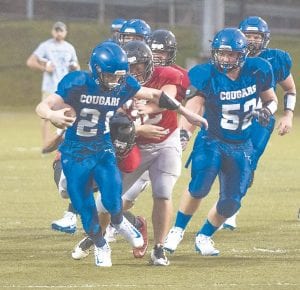 After Kentucky lost to Northwestern in the Music City Bowl to end its 2017 season, offensive lineman Logan Stenberg took to social media to apologize to UK fans.

“I feel like I am just really hard on myself. If I don’t feel like I have played to 100 percent or if I am slacking in any area of the game, it weighs on me hard,” said Stenberg. “I like to give everything I have on that field every game, every snap for the team, the fans, the whole state of Kentucky, my family back home, everybody. It didn’t feel like I did that in the bowl game.”

Stenberg, who started all 13 games last season, doesn’t want to apologize for what Kentucky does during his junior season. He says you can sense the different mentality the team has that started in spring practice when his role was to help younger players “kind of find their place and what that role might be” rather than focusing on himself.

He’s developed a stronger bond with linemen Drake Jackson and Bunchy Stallings. They man the center of UK’s offensive line.

“Last year I feel like we were all kind of acquaintances. We weren’t really tight. Now we have hung out, worked all off-season and have really just grown and become close. I think we will be better than last year because of that,” Stenberg, an Alabama native who had 37 knockdown blocks in 2016, said.

Kentucky’s offensive line has gotten more credit the last two seasons because Benny Snell has rushed for over 1,000 yards two straight seasons and has a chance to become UK’s all-time leading rusher this season. Still, no UK lineman was named to any of the three preseason all-SEC teams picked by SEC media members in July.

“I would like to say it won’t bother me but I have thought about it. It does drive me in the weight room to get stronger. Everybody is going to be good in the SEC. I have to have an edge. We all do,” Stenberg said. “I have to be nasty or I have to be strong or faster. I am always working to improve my game a little extra to where I can overcome all that.” 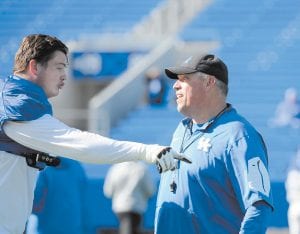 That mentality comes naturally. He’s always been aggressive going back to middle school. He’s been the lineman known for picking up personal foul penalties.

“That has definitely come back to bite me in the ass a couple of times but I don’t think I could change. I am not the biggest, fastest or strongest, so I have to be the nastiest. That’s how I think about it,” the Alabama native said.

Stallings and Stenberg were both recruited out of Alabama by UK offensive line coach John Schlarman. The two players did not know each other — Stallings is a year older than Stenberg — but Stenberg said Schlarman relates well to players and makes them feel comfortable.

“Even when I am here, it’s not like anything has changed with him. He’s still the same dude that recruited me, and that’s been really good to see. That was one of the big things for me. I wanted someone that actually cared about me and coach Schlarman certainly does,” Stenberg said.

Kentucky fans were anxious to see just what Stanford graduate transfer Reid Travis would look like during UK’s exhibition games in the Bahamas.

He showed them plenty, too, and Kentucky fans are even more giddy now than they were when he opted to take his name out of the NBA draft and then transferred to UK to join a roster that seemed to have everything except an experienced, physical inside player like him.

“Kentucky has not had a guy like Travis,” said ESPN recruiting director Paul Biancardi. “I have always loved him. He’s always been a winner. I have appreciated his game and just having his experience in high-level games is big. His willingness to come to a loaded roster and still be comfortable tells me how competitive he is. A lot of guys would have run away from a roster like this. He embraced it.”

Travis’s importance to Kentucky was not lost on SEC Network analyst Dan Dakich, who can be blunt with his analysis and is not always a UK fan favorite. However, before UK’s first exhibition game he labeled UK not only as a Final Four team but the team that would win the national championship.

“Reid Travis is a perfect fit for Kentucky. I think they are the favorites to win the national championship with him,” Dakich said. “He will be fine. If they have 99 problems, he ain’t one of them. Reid Travis on the block is going to be death all year long.”

Travis’s numbers were not mind boggling in the Bahamas. He averaged 10.8 points, 10.3 rebounds and 1.5 assists per game. He was only 15 of 44 from the field but made 11 of 14 free throws (78 percent). However, assistant coach Joel Justus emphasized that numbers are not everything.

“He is going to be really good in our system. There are going to be times he will struggle right now but he is playing hard,” Justus said. “These young guys are so blessed to have him. They love playing with him. He is doing outstanding things for our basketball team that are not showing in the box score and will do that all season.”

It only took two exhibition games for some Kentucky fans to start comparing freshman guard Tyler Herro to former UK great Rex Chapman. Herro scored 39 points in his first two games, including 22 in just his second game when he was 7-for-10 from the field and 4-for-5 from 3-point range.

“Rex thinks he’s the next Rex. But I just want him to be Tyler Herro. Be who you are,” Calipari said. “Rex was a real high-flyer. Tyler can jump and do that, but Rex was unique and Rex ended up being special.

“Maybe in time that may be the case, but right now just let him be Tyler.”

Herro has only seen YouTube clips of Chapman, who ended his NBA career in 2000 – the same year Herro was born. However, Chapman has introduced himself to Herro and texted him before he played in the Bahamas.

“I’m excited that he has my back. It’s good to have a guy like that,” Herro said.

Rivals.com recruiting writer Krysten Peek remembers walking through a gym in Dallas this summer when Kahlil Whitney, a fivestar small forward from Roselle, N.J., had a putback dunk that “shut the gym down” because it was so impressive.

“He is so explosive. His outside shot is so much better than what it used to be. He’s just a different player from a year ago,” said Peek. “He is a fun, explosive player in transition and he is very passionate on the court.”

His commitment to Kentucky last week got a bit overlooked because John Calipari’s team was playing four exhibition games in the Bahamas. However, the 6-6 Whitney is a consensus top 20 player nationally and a player that Calipari targeted earlier this summer.

His commitment came just a few days after Pendleton County’s Josh Allen, another 6-6 wing, also gave his verbal commitment. That meant Calipari needed only a very few days after D.J. Jeffries de-committed from UK to add two other similar players.

“I think he (Whitney) is abetter player and that might be what intimidated D.J. some,” Peek said. “Quicker in first step, finishes better, better rebounder. I have never seen Kahlil take a game off. He’s fun to watch. If he is in the gym, I am watching.

“Once Kentucky started recruiting Kahlil and Dontaie, I knew there was a chance D.J. would decommit. No player wants to see coaches recruit other players at his position. There are a few schools involved now for D.J. Memphis most definitely is a contender. Also look for Ole Miss to get involved and his cousin, K.J. Lawson, plays at Kansas, so they’ll be in the mix as well.”

Calipari had never had a player de-commit from Kentucky before — which was no surprise to Peek.

“Any time a player commits to Kentucky, you think he will stay because of what Kentucky stands for. It is the dream school for a lot of players but also remembers kids have egos and it is a business. I think his feelings got hurt a little bit when Kentucky recruited other players,” Peek said.

. When the summer started,

Cassidy Jo Rowe was a Louisville fan. Not now, though.

The Shelby Valley freshman got a scholarship offer from Kentucky coach Matthew Mitchell in mid-July and last week decided she was ready to give her verbal commitment to UK before her freshman year of high school even started.

“I’ve had a few weeks to think about it. I talked to my parents and they were very supportive. I have always wanted to stay close to home and the (UK) coaching staff has been so good and so supportive and they just have a great program,” the Shelby Valley freshman said. “Once I got to really thinking about it, there’s no where else I would want to go.”

“I am a Kentucky fan today,” Rowe laughed and said. “The coaches were all really excited when I called. They were happy I was joining the Wildcat family and I am, too.”

Rowe tore the anterior cruciate ligament in her knee last month during an AAU event in Chicago just before she got the UK offer.