He’s already being projected as a potential No. 1 pick in the 2016 NBA draft and even coach John Calipari knows Kentucky fans are wanting to compare Skal Labissiere to former UK greats Anthony Davis and Karl-Anthony Towns.

Yet Labissiere’s teammates say there is another side to the versatile, skilled 7-footer from Haiti.

“Skal is very fun. I feel like Skal is like a little kid to me. He is the goofball on the team,” said junior guard Dominique Hawkins. “He is always goofing around. If you are sleeping, he is tickling your face or something like that. People don’t really know, but he is goofy.”

Could he be this season’s Willie Cauley-Stein personality-wise for UK?

“I don’t know. Depends on how he wears his hair,” Hawkins laughed and said referring to the time Cauley-Stein dyed his hair blonde for a game.

Junior Marcus Lee is not opposed to being a jokester. But like Hawkins, he says Labissiere is the team’s leader in that category already. 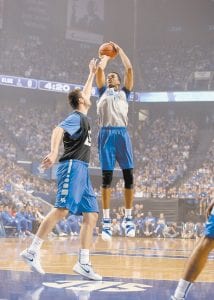 Freshman Skal Labissiere could be the biggest cut-up on this year’s Kentucky team based on what teammates say. He could also be the top pick in the 2016 NBA draft. (Photo by Vicky Graff )

“Skal is definitely the biggest cut-up on the team. He has no off switch. He just keeps going and that is what is kind of cool about him. He is like a jolly person. That is what makes it so fun,” Lee said. “When we come in for early workouts, half the team will be asleep and he will be in here just annoying you. It’s such a fun annoying thing that you love it.”

Labissiere, despite the questions that remain about his eligibility, didn’t deny tickling teammates’ chins and faces — and was laughing the whole time.

“I did do that. I can be pretty goofy at times,” Labissiere, who has been named to several preseason elite teams, said. “That is just part of my character and who I am. I have always been that way. I love playing and that is one of my passions. I enjoy doing it and I will show that I enjoy it on the court.”

He also is not afraid to laugh at himself like he did when he broke a driver hitting off the tee at a golf course while he was playing with some of the UK basketball managers.

“That was my third time playing golf. I got criticized for it a lot. It is a fun sport but it can be very frustrating at the same time. I am just having fun with it. It is something I want to do later,” he said.

“It was an old club. That’s why it broke, but everybody still gave me a hard time. It is fun, so I think I will keep doing it to pass time. I can hit it pretty far at times. I am not very consistent because I don’t play often. Sometimes I know where it is going, sometimes I don’t.”

Matthews doesn’t mind being under the radar

Kentucky freshman guard Charles Matthews, who verbally committed to UK during his junior year, feels he’s still under the radar with most UK fans.

“I don’t have a problem with that. I think it keeps me competitive, keeps me humble and keeps me working hard and striving to be the best I can be,” he said. “I don’t create the rankings, so I can’t tell you why I dropped last year. I just work hard and worry about things I can control.”

He said summer pickup games were competitive and fun with players “getting after each other” daily. It also gave him a chance to get to know a player like Isaiah Briscoe better.

“I knew him but our relationships has continued to grow as we got here as it has with each and every guy on this team. We kind of heard of each other, but did not really get to figure each other out until now. Isaiah is a funny, high-energy guy. He is a good guy. I love him. Both him and Skal (Labissiere) are funny guys.”

Matthews prides himself in winning and making winning plays.

“ Regardless of what I have to do to get my team over the hump, that is what I do. As long as we win I am happy,” he said.

He credits his parents for helping shape his career and says he continues to speak to them daily back in Chicago.

“They check on me and I check on them. I am grateful to have a great mother and father both in my life,” he said.

Chicago trainer Eric Nawracaj worked with Matthews — he also worked with sophomore guard Tyler Ulis — to get him ready for college basketball.

“It was tough. I was extremely exhausted after workouts but it is paying off,” Matthews said. “We did a lot of work on my midrange game, a lot of conditioning and being able to last a full game and go hard the whole length of the game.”

He credits his high school coach, Gary DeCesare of St. Rita, for preparing him defensively because he had been a college coach.

“He was never the type of guy to give special treatment to the best player. If anything, he pushed me the hardest,” Matthews said. “I was never used to getting things my way and being catered to, and that will help me a lot here. My freshman year I didn’t want to play for him. He was yelling at me for nothing. But as I matured, I saw he was a great guy and helped me mature and become much better on and off the court.”

Another former Chicago prep star, Anthony Davis, also did well at UK and now is one of the NBA’s best players. He led UK to the 2012 national championship.

“Anthony shocked everybody. Growing up not many knew him but I don’t know of many people who do not know him now. I met him several times,” Matthews said. “Chicago has so many great players. It’s hard to put on one player being the best, but he does get a lot of pub (publicity) and deserves it.”

“It was awesome growing up in the city (of Lexington),” said Wood.

The Lexington Lafayette junior quarterback gave his verbal commitment to UK the same night the Wildcats lost to Auburn. The 2017 recruiting class now has six commits, including quarterback Mac Jones of Florida.

Wood, a teammate of UK commit Landon Young, also had offers from Louisville and Cincinnati and had interest from Tennessee, Mississippi State, Pittsburgh, Wake Forest and Indiana.

Wood has been projected as an “athlete” at the Division I level and not a quarterback. He disagrees.

“They want my mindset to be and my mindset will be on playing quarterback,” Wood said. “I am going to work my butt off and compete. I am not a 6-5 quarterback, so I guess people think I can’t play quarterback in the SEC. I don’t care if you are 7-4 or 4-foot, if you can lead a team and play football, you can quarterback.

“I had to work hard at quarterback coming into high school. In middle school, you are not a real quarterback. You just hand off mainly. In high school you have to use your mind more, read plays, have the right mechanics, throw accurately.”

He’s not worried about quarterback Gunnar Hoak of Ohio being in the 2016 UK recruiting class or Jones in the 2017 class.

“Competition is competition. Anywhere you go there will be somebody under you wanting your spot and someone maybe above you that you have to take that spot from,” Wood said.

Can Stoops’s troops rebound after beatdown?

Going to be interesting to see how coach Mark Stoops’s team rebounds from the beat-down it took at Mississippi State when it hosts Tennessee Saturday night. The Vols probably should have won at Alabama and will give UK a lot of the same problems that State did.

While Tennessee quarterback Joshua Dobbs is not Dak Prescott of State, he’s a legitimate dual threat and that has been bad news for the Cats this year.

Also going to be interesting to see how UK fans either stay behind this team or abandon the Cats.

If you have a comment, suggestion or criticism, contact me at larryvau@gmail.com or on Twitter at @ vaughtsviews. The only thing I have enjoyed more than covering Kentucky football and basketball for over 40 years is interacting with UK fans. I’ve enjoyed hearing from many of you and hope that continues.