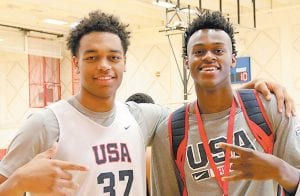 LONGTIME FRIENDS — Jarred Vanderbilt, right, and PJ Washington have known each other for years and Vanderbilt’s father says they will play well together next season at Kentucky. (USA Basketball Photo)

Jarred Vanderbilt will be reporting to Kentucky June 6 as scheduled and apparently is fine after injuring his lower right leg/ankle late in the Jordan Brand Classic in April.

“Everything is going well,” said Robert Vanderbilt, Jarred’s father. “He’s feeling good, looking good. He just can’t wait until he gets his opportunity at Kentucky.”

Robert Vanderbilt said his son was told to stay off the leg after the injury and has been doing exactly that.

“He was told to rest and that’s what he has been doing the last few weeks. The doctor said it all looks well and he will be fine when he gets to Kentucky,” Robert Vanderbilt said. “Most certainly the rest will be good for him. He had been going pretty strong.”

The 6-9 Vanderbilt had been impressive in postseason all-star play starting with the McDonald’s All-American Game and then the Nike Hoop Summit. He had 17 points and seven rebounds in the Jordan Brand Classic. 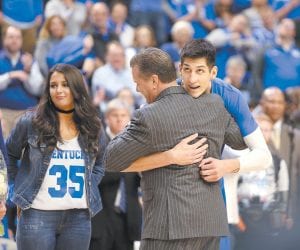 Keely Potts, left, sometimes thought John Calipari was too hard on Derek Willis but also understood he was trying to make him better. (Vicky Graff Photo)

“He has not done anything since then except rest and get ready for UK,” Robert Vanderbilt said.

What the UK signee will not be doing is trying out for the USA under 19 team that will be coached by John Calipari and go to Egypt this summer. Robert Vanderbilt said they were not even sure Team USA would go after the recent bombing in Manchester, England.

“I told coach Cal when he was here that I would wish him well but too much is going on in the world. I do not want to go outside the country right now. The timing is just not right,” Robert Vanderbilt said.

“Those three can certainly play together,” Robert Vanderbilt said. “They played well together at the McDonalds Game and the Jordan Classic. They have played together and known each other for years. They get along real well.

“I think it is a great thing for coach Cal to have that much talent on one team and the opportunity to coach guys like that who all have the same goal to try and win a championship as a team. I think that attitude is a plus when you look at all the talent this team will have.”

Hamidou Diallo probably would have been a late first-round draft pick this year but could dramatically improve that status next year now that he decided to return to Kentucky for a full season of play.

Even though he redshirted after arriving at UK in January, he did go against De’Aaron Fox, Malik Monk and Dominique Hawkins in practice. That makes him UK’s most experienced returning guard to go with incoming freshmen Quade Green, Shai Alexander, Jemarl Baker and possibly Kevin Knox Jr.

Odds are Diallo will be the starting two guard with Green at the point.

“They will probably be pretty amazing to be honest,” UK signee Nick Richards said earlier this spring. “He is an explosive two guard. He can dunk anything or score from anywhere. He’s really good.”

Green called Diallo his “best friend” and played a major role in getting Diallo to pick UK.

“He’s very good. He is getting his jump shot right so when the time comes next year I can kick it out to him on the wing and he can knock it down,” Green said. “He’s so athletic. He’s crazy athletic. He’s unstoppable when he gets going downhill.”

With Diallo back, Kentucky has seven of the top 30 prospects in the 2017 recruiting class on its roster for next season.

Many Kentucky basketball fans thought there were times when coach John Calipari was too hard on Derek Willis.

So what did Willis’s fiancée, Keely Potts, think?

“If you were to have asked me in the middle of game I would probably go off a little bit,” Potts laughed and said. “But I am not frustrated with Cal but grateful. Some things might have been questionable to me at times, but when I was on the (UK) dance team I was always criticized by coach. My teammates would crack up laughing that I always got yelled at.

“Derek’s coach wanted the best for him. Once I would get time to step back and realize what was happening, the coach was right. I don’t really like it when Derek gets criticized. I really don’t like anybody yelling at Derek, but then sometimes he needs it.”

What about fan criticism of Willis?

“At the end of the day they need to remember that these guys and coaches, and even the girlfriends, they are still people. They are just like them. We all have a job, go to school. The guys are just shown in a different light, they are still human beings and the criticism can still hurt,” Potts said.

Covering Kentucky basketball had always been fun for Shannon Spake. She had become a regular at UK games and when the 2015 team was trying for a 40-0 season, Spake spent an enormous amount of time with the team doing special features for ESPN. Last season she did not get to work any UK games after she moved from ESPN to FoxSports.

“Fortunately, I was able to do a handful of (basketball) games for Fox,” Spake said. “I did the tourney in New York with Auburn and South Carolina. But there is nothing quite like Rupp Arena, Cameron (Indoor Stadium) and Allen (Fieldhouse).

“I had never covered Big East basketball until this season. I got to cover Villanova, and that was even more exciting since Villanova was coming off a national championship. I got to go to Xavier, Marquette, Georgetown for the first time. It kind of expanded by my college basketball run.”

“I was so used to going to practice and seeing the team and getting to know the guys,” Spake said. “A lot of them this year when I watched games I did not know and I missed out on getting to know the dynamic of the team. (ESPN’s) Kaylee (Hartung) did a great job at the games. I watched them every Tuesday night and a lot of other times, too.

“BBN has always been so good to me. It was hard for me not to be there. I had hoped to get there for a game but I didn’t. But next season I definitely am coming back for a game. I miss BBN.”

You will also be able to hear her voice in movie theaters soon. Spake, who covers NASCAR for FoxSports along with other sports, will voice on-track reporter Shannon Spokes in the film Cars 3 that will premier in theaters June 16. Just like in her real life job covering college football, college basketball and NFL as well as NASCAR, she’ll get on-track interviews and the movie promo says Spokes is “not afraid to ask racers the tough questions” much like Spake is not.

“We loved coming to Kentucky last year, so we definitely wanted to come back,” Paul Washington said.

His younger son, Spencer, will be back in Kentucky to play for his dad. He’s a senior and a terrific shooter.

“He is stretching out and getting stronger. He is going to be taller than P.J.. He wears a size 17 shoe,” Paul Washington said. “He is a shooter, too. Fans are going to enjoy seeing him and the rest of our team.”

Both the Hoop Fest and Kentucky Lake Showcase are part of the Grind Session. So is McCracken County Mustang Madness Jan. 6-7 in Paducah.

Hillcrest Prep (Arizona) will play in all three events and just added Kyree Walker, a 6-6 wing who was named the MaxPreps National Freshman of the Year after averaging 21.5 points, 6.6 rebounds and 3.9 assists for Hayward (Calif.) Moreau Catholic last season. He already has a scholarship offer from Arizona.