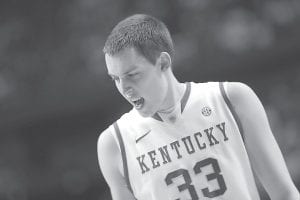 Kyle Wiltjer is seen in action in the Southeastern Conference basketball tournament in March. (AP photo)

The 6-foot-10 Wiltjer, who played with the Canadian development national team this summer, posted a letter on Kentucky’s athletic department website Monday afternoon, saying he will seek a situation to help him “compete the way I know I can. … wherever that may be.”

He had announced in April he would return to Kentucky for his junior season. Wiltjer said this week he has some “new and adjusted goals” after fulfilling dreams of winning a national championship with the Wildcats as a freshman and playing against some of the nation’s best players.

Wildcats coach John Calipari expressed disappointment over Wiltjer’s decision to leave but wished him luck on his website. He said Wiltjer has the mentality, skills and length to play professionally but needs to develop physically.

Calipari also credited Wiltjer for the progress he made in his two seasons with the Wildcats.

“Kyle went from being the seventh man on the national championship team to the Sixth Man of the Year in the SEC,” Calipari wrote, “and I felt like over the next few years he was going to develop into the player I know he will eventually become.

“Unfortunately, that may happen somewhere else.”

The Oregon native, whose father is a Canadian and has dual citizenship, averaged 10.2 points and 4.2 rebounds per game as a sophomore. Wiltjer was second on the team with 55 3-pointers last season and made 90 over his two-year Kentucky career.

He was going to be asked to provide experience and leadership for Kentucky’s incoming freshmen.

“It is difficult to put into words how hard it is to possibly leave,” Wiltjer said, “yet I am confident that whatever I choose, I will give it my all. Regardless, I will always bleed blue and will never forget these amazing last two years at Kentucky.”