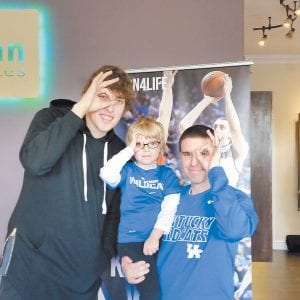 Kyle Wiltjer, left, put up the 3-goggles with fans during an autograph stop last week. (Photo by Larry Vaught)

Sporting News columnist Mike DeCourcy always believed that Tyler Ulis would be a successful college basketball player and was one of the few who did not question whey Kentucky coach John Calipari signed the 5-9 point guard out of Chicago two years ago.

“Honestly, he far surpassed what I imagined. I knew he understood the game at a high level, so it’s not a surprise that he can run an offense and succeed. What I did not expect is that he would be such an imposing leader,” De- Courcy said.

“I would imagine Cal probably saw that and it was one of the reason UK offered, but it’s not always something that’s going to come up in a summer game.

“The second thing that I did not expect is his ability to finish plays. Get deep in the lane? With his quickness and ball handling skill, sure. Make the right play out of that? Absolutely. But finish over 6-10 guys? With the kind of alacrity he shows? It’s astonishing.” 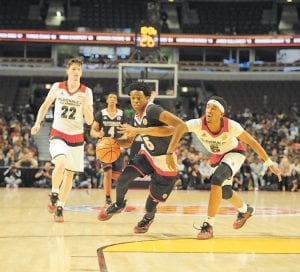 DeCourcy said he understood why some questioned Ulis coming out of high school, but he said there was also a lot he liked that he knew would translate well to the college game.

“He could get anywhere he wanted to go with the ball. And whereas someone like Parker Jackson-Cartwright at Arizona can do that, Tyler is short but he’s not frail. He’s got a physical toughness to him, not just a competitive toughness,” DeCourcy said.

“I’ll admit I wondered about his defensive ability, too. I saw problems in that area last year. But he improved to the point where he’s really good at that end. That comes with experience and understanding and added strength from the weight room. And, most important, desire.” 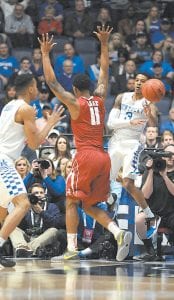 ULIS IS BETTER THAN SOME THOUGHT — Sporting News columnist Mike DeCourcy never thought Tyler Ulis could be such an “imposing leader” at UK and says there’s no question he will play in the NBA. (Photo by Vicky Graff )

DeCourcy thinks those same attributes will make Ulis successful in the NBA.

“There’s no question he’s a pro. Is he a starter? At 5-9, maybe not, but he can be a contributing player on a winning team,” DeCourcy said. “Perhaps the evolution of the game toward the perimeter helps make him a starting point guard in the NBA. I can’t be sure of that. But I feel certain he’ll be in the league a long time.”

Based on what we saw this year, so do I.

Quarterback Drew Barker has had his off-field issues at Kentucky. Now getting ready for his redshirt sophomore season, Kentucky coach Mark Stoops is seeing not only improved play on the field, but improved maturity both on and off the field. In fact, Tuesday he said there was a “big difference” in Barker’s maturity level and that should be good news for UK football fans.

“I don’t see the ups and downs. I see a guy that’s very steady. You’d have to ask him, but I see a guy that’s enjoying practice but he doesn’t have to be out there talking. The guys are out there jawing, having fun, which I’m good with, but with him, I like to see the quarterback just being steady, very mature and I really like what I’m seeing out of him,” Stoops said.

“He’s competitive and he likes to play, but the off days. I’m seeing a guy who’s studying film more, that’s more serious about his business and that’s showing up on the field. He’s much more consistent.”

Stoops said he has not talked to Barker a lot this spring and called that a “good thing” when he has not had talk to him a lot individually.

“I’ll grab him here and visit with him from time to time. Right now, I just see consistency. I’d say he’s growing up and more comfortable and more serious in his approach and it’s showing up on the field,” Stoops said.

Another player who has had maturity issues despite being productive on the field is junior running back Boom Williams. He’s not having contact this spring because of offseason elbow surgery, but Stoops sees new offensive coordinator Eddie Gran having an impact on Williams already.

“He’s been out there and he has been more consistent. With a guy like Eddie Gran coaching him — Eddie’s been around a long time. He’s coached a lot of great running backs and is very seasoned and if Eddie can’t get him right, nobody can. I have seen him making improvements,” Stoops said.

Kudos to Jamal Murray for holding a farewell press conference to thank Kentucky coaches, teammates and fans and to give his father, Roger, a chance to do the same thing.

My guess is that Kentucky fans are going to hear and see a lot more about Murray in the years ahead. He’s now projected as a top five pick in the draft even though a year ago at this time he still had the option of returning to high school in Canada for another year.

“I think every year he plays he will keep getting better. At the next level when he gets there, he’ll keep getting better and his role will get bigger and bigger,” Alexander said. “I just know he is going to be a spectacular player. I can’t wait to see how things go for him. He is one of my really good friends and I just can’t wait. I talk to him all the time. I encourage him and tell him to keep doing what you are doing. He keeps showing out for everybody in Canada. If he keeps doing what he is doing, he will be very successful in the NBA.”

Alexander never doubted that Murray and coach John Calipari would be a good fit.

“Jamal is easy going and very coachable. You tell him to go to do something and he will do it. He loves being coached and loves improving and all those things. I think it was an easy transition for him to playing for coach Cal,” Alexander said. “Off the court, he is just funny. Whenever we get a chance to hang out or see each other, we just have lots of laughs. My teammates have met him, too, and love him. He’s just a great guy.”

“It means a lot to be able to represent my country,” Fox said in a telephone interview. “This is one of the most prestigious games, so I feel honored.”

He had attended two previous USA Basketball training camps, but this is the first time the point guard has made a Team USA roster.

“I hope finally making a team shows how I have improved as a player,” Fox, who played in last week’s McDonald’s All-American Game but struggled with his shooting, said. “Those USA camps, they make you become a better player.”

This was the first time he has played with Wenyen Gabriel, another UK signee.

Fox still is not sure if he will be playing with Tyler Ulis at UK next year or not. The sophomore point guard is projected as a first-round NBA draft pick but has not said if he’ll keep his name in the draft or return to UK.

“Tyler is always talking and telling people what to do because he knows what everyone is supposed to be. Him and John Wall are probably going to be the toughest guards to live up to at Kentucky,” Fox said. “If he comes back, then it means I have somebody to help me.”

Fox was the Gatorade Texas State Player of the Year. He averaged 32.4 points, 7.7 rebounds, 4.2 assists, 2.7 steals and 1.6 blocks per game to help his team finish 25-8 record and reach the Texas 6A Region 3 championship game.

Former Wildcat Alex Poythress is making appearances across the state signing autographs. On Saturday, he will be at Performance Physical Therapy in Nicholasville from 11 a.m. to 12:30 p.m. and then at the Simpsonville Outlet Mall from 2-3:30 p.m. On Sunday he will appear at The Tin Roof in Louisville but a time has not been set.

Kyle Wiltjer, who transferred from UK after two seasons and finished his career at Gonzaga, also has been going across the state signing autographs. He will throw out the first pitch at the Bowling Green Hot Rods game Thursday at 6:35 p.m. CST.

Wiltjer came back to Kentucky to visit with former teammates Poythress, Jarrod Polson and Sam Malone. When a possible autograph tour was suggested, he wasn’t sure how it would go.

“I am not the kind of guy that just wants to sign autographs and bounce,” Wiltjer said. “I try to interact with fans. I am very appreciative of the fans. I like talking to them. They have been so great to me, the least I can do is have a nice conversation with them.”

During a stop in Harrodsburg at Klosterman Eye Associate, one fan even gave Wiltjer a print he had brought to have autographed after Wiltjer said he liked it.

“People have given me some really cool stuff that my parents are going to love,” Wiltjer said.