Ulis to be drafted, but which round?

“He is a pro. He can play on the professional level. He is good. He can do everything,” Johnson said after Ulis had 19 points and 10 assists against his team last week. “He is a pure point guard that can hold his own. He takes charges. He throws his body in there. As a coach you don’t like coaching against him. I see lot of things I did as a player in him.”

During his radio show following that game, Calipari told fans UK would have a new point guard next year — meaning the 5-9 sophomore would be leaving Kentucky for the NBA. Calipari said Ulis will need to be a more consistent 3-point shooter in the NBA, but he will be “disruptive defensively” just like he is at UK.

“I think he’s going to be a really good pro. I think he’ll have a long career,” Calipari said.

That made me wonder what NBA draft analyst Ed Isaacson(@nbadraftblog on Twitter) thought about the draft potential of Ulis.

“Ulis has had as good a season as any point guard in the country, and I think he really has done a lot to improve how NBA teams may view him,” Isaacson said. “That being said, I do think there is a cap as to how high his draft value could go just due to his size. In today’s NBA, if you’re going to be less than 6-foot, you need to like Boston’s Isaiah Thomas, with explosive athletic ability and solid body. 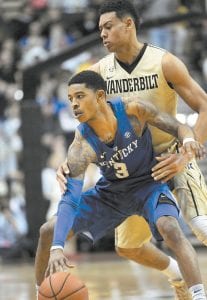 NBA draft analyst Ed Isaacson says Tyler Ulis’s draft potential is “probably very close to where it ever will be” and whether he leaves UK after this season or stays another year likely will not impact where he’s drafted. (Photo by Victoria Graff )

“That’s never going to be Ulis, but I do think there could be a spot for him as a third point guard on a team, and wouldn’t be surprised if he was a mid-second round pick. Any higher than that could be a mistake.”

Most NBA mock drafts have Ulis in the second round. With the season he’s having, it’s hard to imagine anything he could do better at Kentucky next year to improve that status since he will still be a 5-9 point guard.

“I think it all depends on how this season ends for Kentucky,” Isaacson said about Ulis’s future. “If they fall short of a Final Four this year, he may feel the need to come back and lead next year’s group, which will again be stocked with talent, and make another run at it. 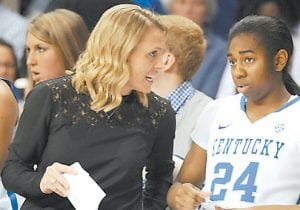 Matthew Mitchell says assistant coach Camryn Whitaker is a “fiery coach” full of passion for basketball that he loves. (Photo by Victoria Graff )

“I don’t think his decision should be based on the draft because I don’t think it will help or hurt him either way. He’s never going to be an Isaiah Thomas type, so his NBA potential is probably very close to where it ever will be.”

Ulis had consecutive “off ” shooting games against Alabama and then Vanderbilt, where he was just 5-for-20. Since he’s playing almost every minute of every game, one might wonder if he could be wearing down. Ulis says no and so does Calipari who tried to back off his workload in practice only to have the guard tell him it would “screw me up” to alter the daily routine.

“We got two games. Regular season’s over,” Calipari said after the Vanderbilt game. “We got some time and we go into the tournament. He’s fine. He just had a bad shooting night. He’s had bad shooting nights, just not that bad.”

Offensive lineman Drake Jackson of Woodford County will start his first spring practice at Kentucky next week after graduating early so he could jump start his collegiate career. Former all-SEC defensive lineman Dennis Johnson was Jackson’s head coach last season and offered him some advice about what to expect at Kentucky based on his experiences there and in the NFL.

“He gave me a lot of things to look forward to. He said avoid the bad things because they will not get you anywhere. You can have fun when you are done playing. I have my mind focused to go do what is right and set myself up for the future. I am going to have fun but not too much fun. I will wait to do that after football,” Jackson said.

He said Johnson told him the SEC would be a “man’s game” and that he would get beat by opponents in college, something that seldom happened to him in high school.

“He said these are guys fighting to get their mom out of the hood or to get a roof over their heads. These guys are doing it for a whole different reason. They are not doing it because they get to wear the jersey on Friday during high school,” Jackson said. “You can’t come in with an attitude that you’re the big man on campus because you’re not.”

Going into postseason play, Matthew Mitchell could not be happier with the way former Western Kentucky star Camryn Whitaker has fit into his coaching staff in her first year at UK.

“She is doing such a great job. She is another person with passion for the university. She grew up and if UK had been an option, she would have played here,” Mitchell said. She loved UK, but had a great career at Western and is a proud graduate and learned a lot there.

“But like lot of Kentuckians she loved UK and I think she is passionate about being back. She is a great teacher, hard worker, will speak her mind. That has been great for me. She will let me know what she thinks needs to be done. Sometimes that is not the easiest thing for an assistant to do. She has so many qualities to help us and is still a young coach with a lot of room for growing.”

Whitaker became just the second player in state history to have 2,000 points (2,574) and 1,000 assists (1,044) at Harrison County. She coached at Western, Austin Peay, Missouri State and Dayton before coming to UK this season.

“I think that is a gift hopefully that some have that God has given us that ability to relate to players. Sometimes being older helps, sometimes being younger helps. There is never one perfect age as a coach,” Mitchell said. “I used to wonder if as you grew older you were less connected, but if you are in their lives every day and just spend time with them and they know you are sincere and care about them and their well being, you can be any age and respond.

“She is still a fiery coach. She has a lot of passion. I love that about her. She is fiery in practice and fiery on the bench and has great suggestions. I think that tenacity as a player has definitely impacted her in a positive way as a coach.”

Saturday will be Senior Day at Kentucky for Alex Poythress, a rare four-year player under coach John Calipari. But it will also be the final Rupp Arena appearance for cheerleader Emily Sawyer, a two-time national champion.

She says it’s impossible to pick one memory that will stay with her the most from her four “unforgettable” years at UK. However, she said her senior year national championship would probably be the top memory.

“Receiving the trophy (in January) isn’t even the best part. The best memory I have is hitting our routine and hugging all of my teammates the minute we dismounted the last pyramid that Sunday,” said Sawyer. “Walking off the floor knowing we did our job and handled business was just the start of it. After we get off the floor we go to a room where they have a TV to let us watch the routine we just did. Next, we walk down a long hallway where you can hear our families and friends shouting, ‘C-A-T-S CATS CATS CATS.’

“I remember standing in that hallway surrounded by my teammates with smiles on our faces and tears in our eyes. We grabbed one another’s hands and I said, ‘Are we ready?’ Together we ran through the tunnel our families had made for us and jumped and yelled and celebrated! Seeing my whole family there waiting to congratulate a final job well done was my favorite memory. I will never forget running through that tunnel of blue with my Wildcats!”

Kentucky cheerleading has a tradition of championships and Sawyer said it was an “honor” to be part of the 21st championship in her senior year.

“I am proud to say I could bring the title home twice in my four years with the help of my coaches and team. I feel like I am a part of history at the university and now it’s great that the ones to come will look back on our routines and admire the winning tradition as well. Long live the legacy,” she said. “I will be 80 years old still sporting my big, shiny championship rings, I’m so proud of them.”

The cheerleaders have been so successful that their titles are almost taken for granted and it’s bigger news when they don’t win than when they do. However, the success requires both skill and lots of work, something Sawyer thinks fans who get to see the cheer team perform appreciate.

“These are the people that enjoy watching us at games and continue to watch us outside of the game day realm. They give us credit every chance they get. I love it when we go to a performance or a pep rally and show off our skills and the people that haven’t seen our competition side are just in pure shock at the talent our team has,” she said.

“This year I really think we raised the bar and did some incredible skills that impressed even the people that don’t know much about cheerleading. The university gives the program lots of support and I am thankful for this because there are very few schools that get all the benefits we do.

“I will say this … Kentucky cheerleading is not for the weak. You are expected be the best on the mat, school and out in the community. We give up our winter break to prepare for the national championship by practicing twice a day, every day. If we aren’t doing our jobs during competition season, we will stay in the gym as long as it takes. The rules are strict, the discipline is intense, but the outcomes are wonderful and that is why Kentucky cheerleading is the dynasty that it is.”