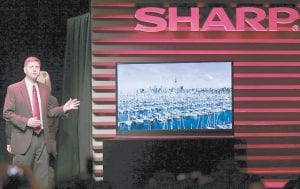 LG unveiled a 55-inch TV that sports “ultrahigh-definition” resolution with four times the sharpness of regular HD television sets, kicking off what is likely to be a mini-obsession with the latest super-clear format at the annual International CES gadget show.

The model announced this week is the smallest in a 2013 lineup that includes 65-inch and 84-inch versions. But the smaller size — and smaller price tag — begins the parade of TV makers that are seeking to bring ultrahigh definition to the masses.

Also known as “4K,” ultrahighdefi nition screens are 3,840 pixels wide and 2,160 pixels tall, or more than 8 million in all. The higher resolution will let TV screens get larger without degrading picture quality, though initially the price tag will limit those sets to technology’s early adopters.

Sharp also announced a new ultra-HD 4K display at the show this week. The 60-inch Purios is due in summer 2013.

The Purios combines an ultra- HD resolution with a proprietary ICC (integrated cognitive creation) image processor, which the company says is able to trick the brain into believing images are actually real.

Still, for a few years, there won’t likely be a mainstream standard for getting native ultra-HD movies and TV shows to the screen either by disc or broadcast.

LG Electronics Inc. said these new TVs will have upscaling technology that takes images of lesser quality and renders them in high detail. The Korean electronics maker also said it has formed an ultra-HD content agreement with Korea’s top broadcaster, KBS, and is seeking out deals with other global content providers. The company offered no specifics.

LG said that with an ultra-HD TV, it will be possible to play phone games with very sharp resolution and in 3-D. The company said it has been possible to hook up smartphones to the TV to play games with current sets, but the resolution isn’t good.

While ultra-HD TV’s may sound extreme and unnecessary, you’ve probably already been exposed to projections at this resolution, because it’s used in digital movie theaters. Sony, Westinghouse and others are at the show with their own huge flat-panel TVs that bring that experience home, if you have a spare $20,000 or so.

While the sets are eye-catching, they will likely be niche products for years to come, if they ever catch on. They have to be really big to make the extra resolution really count. Also, there’s no easy way to get movies in UHDTV resolution.