The past weekend’s memorable photo is of Mitt Romney driving his massive powerboat past a privately built castle, not unlike his own, on New Hampshire’s Lake Winnipesaukee.

On Sunday, he moseyed across the Long Island Sound to the beachy pleasure dome of billionaire conservative David Koch, in Southampton, N.Y. — for a $75,000-a-couple dinner to raise money from like-minded Republicans. Not far away, Koch’s brother Bill, a fellow funder of conservative causes, holds court in the exclusive waterfront enclave of Osterville, on Cape Cod.

The brothers’ family business, based far away in Wichita, Kan., is a notoriously careless emitter of toxic wastes. The Political Economy Research Institute at the University of Massachusetts ranks Koch Industries as America’s 10th worst air polluter. Thus, not a few eyes roll as Bill continues to lead the long fight against a planned wind farm off Osterville’s shore. You understand, it would mar the alleged environmental perfection of the waters in which he sails. 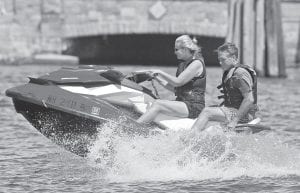 The region’s choice corners are chock-a-block with rich Democrats, too, but it is politically their natural habitat. Why do conservatives from elsewhere hang out in places that tax and regulate and do all kinds of other mean things to rich people like themselves? The reason is that these are nice places, and they are that way precisely because they tax and regulate. And these guys know it. If cooler summers were all they craved, they’d be partying in Upper Wisconsin.

A libertarian friend, a journalist from Texas, once told me she’d like to live in a nice, preserved New England village, but no one there would buy her politics. I told her that if the region bought her politics, the village wouldn’t be nice and preserved. Google the words “McDonald’s” and “Osterville,” and the first link is “Places for McDonald’s near Osterville,” not “in Osterville.”

The West’s libertarian ethic is a beautiful thing when it comes to letting folks get fat, smoke pot or otherwise conduct their lives in peace. But the belief that a man can do anything he wants on his land often leads to destroyed environments.

New England had a piece of environmental good luck when America’s boundaries started expanding. The land was useless from an extractive-industry point of view. Little gas, little coal. Ditto gold, silver and other metals. At the first opportunity, even farmers fled the rocky soil for the fertile Midwest.

And so the Yankees had to switch to plan B. They built factories, using river power, until put out of business by cheaper energy and labor elsewhere. This was at bottom a knowledge economy that continues to this day. The modern version relies on universities to churn out computer, biotech and other inventors of new businesses. Another part of plan B was to become financiers to the national economy.

As investors, New Englanders fanned across the country extracting riches from other regions. They did mining, oil drilling, railroad building. How their activities harmed these other environments was, in most cases, the last thing on their minds. They made sure that their kids attended prized schools back East and that they themselves would not spend their summers near an open pit mine in southern Arizona. They came home to the fresher breezes and charming villages of the Northeast. And the rich from other regions joined them for the summer party.

It’s one thing to pollute other areas. It’s another to despoil where one goes for recreation. It’s animal nature not to dirty one’s own nest. Wherever the well heeled — no matter how freedom-loving they profess to be — go to play, you can be sure of one thing: The place will be zoned to its teeth.