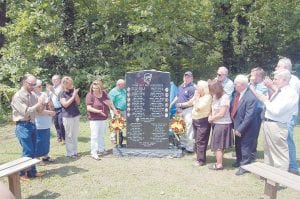 AT THE UNVEILING — Stella Morris, fourth from left, and UMW President Cecil Roberts, joined in the applause given by family members and others after a memorial to coal miners killed on the job or by black lung was unveiled on August 14. Morris, whose husband was killed in a mining accident in 2005, raised the $10,000 needed to pay for the monument, mostly through bake sales and roadblocks. (Photo by Roy Silver)

Miners whose names appear on a memorial unveiled last week should be remembered as heroes for the improved mine safety laws their deaths helped bring about, United Mine Workers President Cecil Roberts said.

“These miners are heroes,” Roberts said during a ceremony at the Cumberland campus of Southeast Kentucky Community and Technical College. “They gave their lives to make things better for the rest of us. They didn’t just die; they are not just a statistic.”

The monument is located near the entrance to the college along the Tri-Cities Miners Memorial Highway. It includes the names of 22 miners who where killed in underground mining accidents or died of black lung. Photographs accompany the names of 13 of the miners.

The coal-black marker is made of polished granite and was paid for with money raised during a year-long effort by Stella Morris of Letcher County, whose husband, David “Bud” Morris, was allowed to bleed to death after he was hit by a piece of mining equipment on Dec. 30, 2005.

In 2007, widows from the Darby and Stillhouse accidents joined forces with Stella Morris to successfully lobby the Kentucky General Assembly to implement a number of new safety regulations that are stronger than those required by the federal government.

“Let me state the way I have admired Stella and the others,” Roberts said, noting how the women fought for tougher regulations and “turned that grief into love today.”

Roberts told the audience attending the ceremony that the 22 miners being honored are among more 100,000 who have died “energizing this place,” and that another 100,000 have died because of black lung.

“Over 200,000 miners have given their lives so the lights can be turned on for a Broadway play … so that when they’re doing all that trading on Wall Street their computers work,” Roberts shouted, adding that if 200,000 workers died in the auto industry or at any other job “Congress would be up screaming about that.”

Roberts, who has served as president of the mine workers union for 14 years, also noted that Congress didn’t pass a true mine safety bill until after an explosion killed 78 miners in a Consol mine in Farmington, W.Va., in Nov. 1968.

Roberts said that while news teams from ABC, CBS and NBC were in Farmington airing images of grieving families, “unbelievably the mine exploded again. People in California had to pay attention. People in New York watched in horror.”

“Nine-thousand fewer people died in the coal mines because of that piece of legislation,” Roberts said. “Seventy-eight miners gave their lives to save 9,000. You will never find a more heroic event.”

Roberts called on those attending the ceremony to continue pushing for new and better safety regulations.

“We should in these hills make a stand for every miner who died,” he said.

Roberts estimates that 1.2 million children have been left fatherless by the 200,000 miners killed in accidents or by black lung.

“That’s millions of grandchildren,” he said, adding that family members and friends of the dead miners have “shed enough tears for us to create a lake here.”

Stella Morris lives in Partridge and works at a tobacco store in Cumberland to support her fouryear old son, who began attending Head Start this week. She was able to raise most of the $10,000 needed to pay for the monument by holding bake sales and roadblocks in the Cumberland area.

Although Mrs. Morris mailed 31 letters to businesses asking for donations for the monument, she got responses from only two, one of which is her employer. Three organizations — the UMW, the Kentucky State AFLCIO, and the Kentucky Employers Safety Association — donated $1,000 each.

Mrs. Morris said that while only the two local businesses bothered to respond, “the members of my community really came through.”