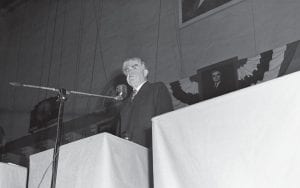 Among President Harry Truman’s toughest critics leading up to the November 1948 election was United Mine Workers of America President John L. Lewis. At right, Lewis addressed the opening session of the UMW convention in a speech in which he assailed Truman in Cincinnati on October 5, 1948. (AP Photo/Harvey Eugene Smith)