By JOHN SEEWER The Associated Press 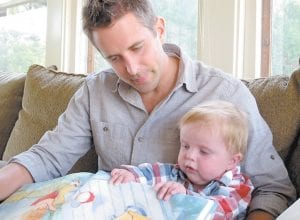 Matt Hammitt, lead singer for the Christian rock band Sanctus Real, reads a book to his 1-year-old son, Bowen, at their home in Perrysburg, Ohio. Hammitt has released an album inspired by Bowen, who was born with a rare heart defect. (AP Photo)

Told that his unborn son had only half a heart and little chance to survive, the lead singer of the Christian rock band Sanctus Real began pouring his fears and doubts into music.

The songs were meant to comfort his family while they searched for answers and sought to understand God’s role during the months before and after the baby’s birth that were filled with surgeries and life-threatening complications.

It didn’t take long for him to realize that his words needed to be shared so that others struggling with life would know they’re not alone.

What came out of the heartache was “Every Falling Tear,” a solo album that’s meant to touch and console during the hardest of times.

“People want to know that their pain has a purpose,” said Matt Hammitt, one of the founding members of Sanctus Real, a band with two Grammy- nominated albums since 2008.

“That’s the biggest part of sharing our story,” he said. “That there is a purpose.”

Hammitt and his wife, Sarah, knew something was wrong minutes after finding out during an ultrasound in April 2010 that their third child would be a boy, following two girls. They saw the sorrow on their doctor’s face even before she spoke.

Doctors later confirmed the baby had a rare congenital heart defect called hypoplastic left heart syndrome, which causes the left side of the heart to be severely underdeveloped. For five months, the couple contemplated all of the possible procedures and treatments while weighing the odds of what could go wrong.

Their baby would face multiple surgeries and an uncertain future at best.

They also didn’t know how to deal with a flood of emotions — the anger, the doubt, the feeling of being alone. Hammitt, 32, decided he needed to tell God how he was feeling, so he started writing songs about their journey.

“I began writing about all that I was learning about struggle and faith,” he said.

Each song tells of a moment or a series of events leading to the baby’s birth — there’s a father’s fear of holding back his love for a son he may never know and a mother’s hope of finding peace in the midst of despair.

“I wanted to write songs that would speak him someday about how much his father loved him no matter how long or short his life would be,” Hammitt said, his voice trailing off.

Hammitt was a high school sophomore when he and guitarist Chris Rohman and drummer Mark Graalman started the band 15 years ago. They’ve stayed together, playing in coffee shops, churches and now arenas.

Sanctus Real will be one of nearly a dozen Christian artists taking part in the Winter Jam tour that starts in January, with stops in 47 cities.

The song from “Every Falling Tear” that means the most to Hammitt is “Trust,” a worship song that reminds people not to lose faith “even in the darkness, even in the questions, even when the hardest times of life are at hand.”

The lyrics were born out of a time when Hammitt was feeling isolated and alone.

“Sometimes we need to be reminded of the truth,” he said. “And for me, the truth is that I trust God.”

Bowen Matthew Hammitt was born on Sept. 9, 2010. His first open heart surgery came four days later and the next night he went into cardiac arrest. A team of doctors and nurses spent an hour performing CPR until they were able to revive him and get him on life support.

Complications and a stroke kept him in the hospital in Ann Arbor, Mich., for a little more than two months.

While there, the couple played demos of the songs Hammitt had written “so Bowen could hear his dad’s voice,” his wife said. Nightshift nurses often turned up the music when most families would leave for the evening.

“They felt it was good for all the babies to be soothed,” Sarah said. “We’d come back in the morning and it’d be really loud.”

Hammitt recorded the songs for the album soon after the family brought Bowen home to suburban Toledo. His only unease was that they might be critiqued like any other work.

“Originally I just wanted them recorded for us at the hospital,” he said. “I realized they’re meant to comfort other people too.”

So far, the response has been what he hoped for. They’ve even received notes from parents who’ve played the songs at their children’s funerals.

Now, the Hammitts want to take their work a step further by starting the Whole Hearts Foundation, a source of financial, emotional and spiritual help for families with children suffering from congenital heart defects. They see the foundation becoming their life’s work.

“It’s amazing to see even beyond the album what’s come out of this,” Hammitt said. “We had a vision in the hospital, how can we help other families, let them know they’re not alone.”

Bowen, who turned 1 in September, faces one more surgery now slated for 2013 to repair his heart. Eventually, he’ll likely need a new heart before he reaches middle age.

He’s growing, but not as fast as doctors would like. Sarah watches him closely for any signs of heart failure. He only has a single ventricle pumping oxygen to his body and lungs so she looks to see if he sweats when he eats or if his skin turns blue or red.

When Matt brought him downstairs after a nap, a look of worry crossed her face when she saw that his hair was matted with sweat. But it turned out there was no cause for concern.

“ We know at any moment things could change even though he’s stable now,” Sarah said. “It’s ultimately God’s will.”