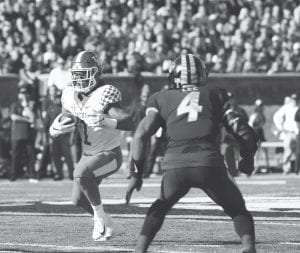 Lynn Bowden earned a game ball from Mark Stoops after making 13 catches for 166 yards and returning a punt 67 yards for a score at Missouri. (Vicky Graff Photo)

Even better, Kentucky has a chance to win the SEC East for the first time if it can beat Georgia Saturday. The game is so big that it starts at 3:30 p.m. on CBS-TV and SEC Nation will be in Kentucky Saturday doing its show from 10 a.m. until noon.

“We are playing for the East. One step at a time. Got to go hard and come back stronger than we ever have against that monster (Georgia),” UK sophomore receiver Lynn Bowden said after the miraculous 15-14 win he helped manufacture at Georgia.

He told coach Mark Stoops to let him return a late punt rather than regular returner David Bouvier.

Bowden responded with a 67-yard touchdown return. He also had 13 catches for 166 yards.

“I felt at half my team was down,” Bowden said after the game. “I had to put it on my back. I am a positive person. I always think there is room to win.”

Coach Mark Stoops said Bowden was so “amazing” that he did something he doesn’t do often — he gave him a game ball.

“He just said give me the rock and put the game on my shoulders. He just played unbelievable,” Stoops said. “He is a competitor. He made huge plays. Just an amazing effort. Really proud of him.”

The coach said UK’s lack of a productive passing game led to some frustration with Bowden earlier in the year but that all changed in the 14-7 win over Vanderbilt when Bowden “embraced” the running game and let teammates know to do the same.

“He was saying, ‘If we have to block, let’s do it.’ Then you get moments like this (against Missouri). You have to step up and do it. There’s sometimes there’s just a sheer desire in that guy’s eyes that he’s going to do it. That’s what he had. No environment is too big for him. He’s not afraid of anything. He’s not perfect but he’s going to go play. What he did was special.”

So special that a Kentucky team that has been an underdog in five of its six SEC games is now playing for the SEC East title.

Obviously, each school has told the Western Hills standout how he could benefit by picking them.

“We look at the offense at each school and what the school has coming in and look at how previous players have done in the offense,” Dale Robinson, Wandale’s father, said. “We have got to do our job. We just can’t listen to what every coach tells us and not do our own research. This is a big decision and you want to make sure you consider everything.”

Robinson has averaged 10 yards per run and has 1,655 yards and 26 touchdowns this season. He’s completed eight of 10 passes for 173 yards — 21.5 yards per completion — and caught 19 passes for 462 yards — 23 yards per catch — and nine scores. He also has two kick returns for touchdowns, one interception for another touchdown and a fumble return for a score. He leads the state with 238 points. If that’s not enough, he has a team-high 94 tackles.

Last week in a 25-18 win over Harrison County he scored on a 62-yard run, a 44-yard fumble return, 88-yard reception and 7-yard game-winning reception.

ESPN and Rivals.com have Robinson as a top-40 athlete in the country while 247Sports rates him as the No. 4 all-purpose back in the 2019 recruiting class.

Dale Robinson says “immediate playing time” will be a factor in his son’s college choice. Wandale Robinson will graduate in December and start college in January.

“Now top freshmen want to make an impact, not redshirt,” Dale Robinson said. “At any of his six schools, he could make an impact right away. Kick returner, punt returner, every down player. He might have to rotate (with other players) but he can do what he wants. He’s worked to be ready for this opportunity.”

Wandale Robinson made it clear early that his college choice would not be based on location.

“Distance is not a factor,” Dale Robinson said. “Let’s say he goes close to home and then is not happy. I want him to be happy no matter where he goes. You can’t put a distance or price on happiness. He has to do what he thinks is best for him and will make him happy. No one else can tell him what that is.”

How good is Robinson?

“Great balance, great vision, very explosive, great speed,” Smith said about what makes Robinson special. “When he runs the ball he runs with the mentality that he is not trying to gain yards. He is running to score a touchdown every time he touches the ball.

“He has gotten thicker and stronger the last two years, but he has always been special. I believe he will be great at the college level and if he gets the right fit, he can be a star player.”

There was a time many Kentucky basketball fans — and maybe even coach John Calipari — thought Zion Williamson would be playing for UK against Duke Nov. 6 in Indianapolis.

Instead, Williamson surprised many by picking Duke over UK and will be starting for the Blue Devils against UK.

Duke freshman point guard Tre Jones helped pulled off the recruiting bonanza for Duke. He was already committed to UK when Duke coach Mike Krzyzewski let him know Williamson was a player he wanted.

“The coaches told me who they wanted. I was able to talk to the guys and build a bond off the court first. Then we realized we could play together and be pretty good. We all bought into it,” Jones said when talking about the freshmen group of Williamson, Cam Reddish, R.J. Barrett and him.

At the McDonald’s All-American Game last March, the UK and Duke signees were doing some friendly trash talking about a game in November.

“They (Duke signees) are all pretty cool but I just want to let them know we are coming for them at Kentucky,” Johnson said then. “Everybody thinks Duke is just going to blow us out and things like that but we are coming after them. I don’t let them run over top of me.

“I am a nice person. It’s nothing personal against them. It’s more off-the-court talking. I don’t really like to get into it on the court unless somebody is really coming after me and talking to me. Off the court, we joke and trash talk. But I had to let them know they were not going to beat Kentucky.”

Jones didn’t take it personally. He knew that was just Johnson being Johnson.

“He is a fun guy to be around. He’s really funny and an extreme competitor but he is definitely a trash talker. That’s part of his game,” Jones said. “He is a funny trash talker, too. He tries to get under your skin. He will joke around with you a lot. Off the court he is a jokester too. It doesn’t surprise me that he says UK will win. That’s who Keldon is. He’s a talker but you have got to feel like you team will win. I get that.”

Kentucky coach John Calipari may not be joking when he talks about how difficult his team’s schedule is this year. Six Kentucky opponents start the season ranked in the USA Today Coaches Poll, including four top-10 opponents in Kansas (1), Duke (3), Tennessee (6) and North Carolina (7). Six more teams sit just outside the top 25 and received votes.

Of the six teams UK will play in the top 25, the Wildcats will play nine games against them.

The SEC has four other teams —Tennessee (6), Auburn (12) and Mississippi State (19) and LSU (23) — ranked among the top 25. Florida, Alabama, Missouri and Vanderbilt earned votes in the poll, too.