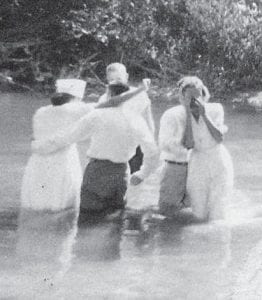 Margaret Combs and her parents are pictured at her baptism.

As I sit here thinking of all the injustices that are being done to state employees and teachers, I am reminded of all the things our grandparents had to go through with the coal miners’ wages and the unsafe working conditions they had to face. Many other workers down through the years have had to face this same thing, but these are the ones I’m familiar with. It seems it always takes a unified voice of thousands of people to get them to listen. Mommy’s daddy, Henry Calvin Pennington, was the president of the United Mine Workers of America in Marlowe.

I found this entry in Daddy’s journal about his job at Marlowe Coal Company and thought it would fit right in with all this union talk. Hope you all enjoy it as much as I did.

“Joe got me a job at Marlowe. (He called his mom and dad by their first names most of the time, I don’t know why. One time I asked him why he called them that and he said, “’Cause that’s their names, ain’t it?”)

“I think it was getting about 18 dollars a day. Best job I ever had. I went in debt at the company store, got me a new bedroom suit a new Warm Morning Stove, chair, rugs and come to about seven or eight hundred dollars.

“Got me a Ford 1/2-ton pickup from Maron Gilley’s son. This was when we first moved down to William Sexton’s house on Colson.

“We bought us some chickens, and raised a garden that year, got along good down there, but we had to move to let Mrs. Sexton’s mother have the house. Charlene was small then so we took some pictures of her at this place.

“The house was cold, no way you could keep it warm. And we had to carry water from a spring up on the hill just below Heney Adams place. It was real good water it run out of a coal seam. There was two of them. William’s folks got water from the other one but he had a tank built and a pipe in it to run water to his home.

“We went rabbit hunting one time when we was down there and I think it was three I got out from under one big flat rock up the hollow above Bill’s car port. And again I was back up there and found two under the same rock.

“Done some squirrel hunting around them hills down there. It’s a good place for rabbit, quail, and squirrel plenty of walnut trees and beach and hickory. Charlene got big enough to talk when we were there. She kept Mrs. Sexton busy answering her.”

Now, I have a granddaughter that can talk a mile a minute and keep you entertained with her stories, too. And coincidentally her name is Story Eliza Hampton.

She will be seven years old in July, but she can carry on a conversation as if she were grown. The other day she was at my nephew Blake Mason’s house while his carpenters were working on finishing up their house.

After she left one of the men asked my brother-inlaw Ricky Mason who that little black-headed girl was that was talking to him. He told him she was Charlene’s sister’s grandbaby.

He said she came out here and had a conversation with me like she was an adult. I asked her later what she and that carpenter were talking about and she said, “Ahh, we was just chit chatting about some stuff.” I’m sure you all have your grandbaby stories, too.

Charlene took Mommy to the doctor today and got an x-ray set up, so hopefully we will get to the bottom of this back trouble she has been having. Then look out rec center and Senior Citizens ‘cause here she comes. Hopefully, if the weather ever clears up, that is.

I messaged Robert Wagner’s daughter and she said he is now at Pikeville Medical Center Rehab and the plan is for him to be there about two weeks and then go home. Keep that situation in your prayers.

Also, my aunt, Linda Hall, is still in Letcher Manor so remember her. Please remember my pastor, Bill Jones, and his wife Sandy and all others who have lost loved ones recently.

Remember how Oma’s article always ended? Try your best to be in church somewhere this Sunday and I say if your church has services Sunday night and throughout the week God would want you there then, too.