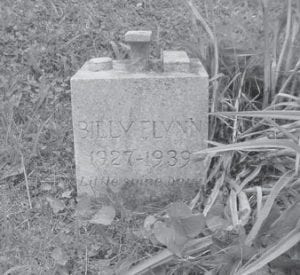 Little Billy Flynn, 12 years old, the little boy who went around whispering to shine everyone’s shoes and who some years ago practically lost his speech, smothered to death at the home of his parents here a few days ago. Billy was a kind and nice little boy and had a host of friends.

The Shoeshine Boys of Whitesburg erected at the grave of little Billy Flynn, a beautiful monument, which was built by the Appalachian Marble and Granite Works of Mayking and donated to the memory of Whitesburg’s little shoeshine boy.

The rock was built of Tennessee marble and is cut in the shape of a shoeshine outfit, with a box of polish and brush and stand cut on the top of rock. On the face of the rock is cut the name of Billy Flynn with the date of his birth and death and then, cut below is “Little Shine Boy.”

Lloyd Niece and Jack Hughes took up a collection and assisted in getting the rock set. It is erected in the Caudill Cemetery and can be seen from the highway going up Sandlick.

(The above article from the August 8, 1940 Mountain Eagle. Photo by Bennett Welch.)