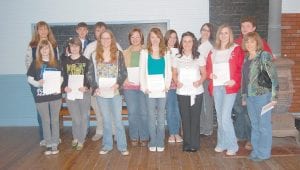 Young people who “have respect for our planet’s natural resources” are the answer to reforesting the planet, a United Nations representative told students from Letcher County Central High School.

“You are the ones who will make the paradigms shift to bring change,” said Elisabeth Guilbaud-Cox, deputy director of the United Nations Environment Programme’s regional office for North America. “You have a better understanding of what is required. Thank you for taking action.”

Guilbaud-Cox presented the LCCHS students with penpal letters written by students in San Vincente de Chucuri, Colombia. The letters, written in Spanish, were handed out March 28 at the Carcassonne Community Center.

The LCCHS students will distribute the 57 letters to other students who take Spanish classes at LCCHS. They will write letters in English back to the Colombian students who are studying English.

“There will be at least one exchange of letters and the discretion to continue that relationship will be left to students, parents and the possibility that those continuing with studying Spanish here at LCCHS may continue the correspondence,” said Regina Donour, a science teacher at LCCHS. 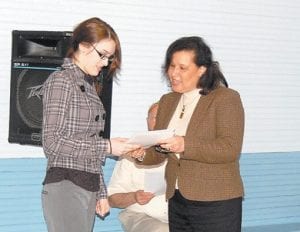 Patrick N. Angel, a forester/soil scientist with the U.S. Department of the Interior’s Office of Surface Mining Reclamation and Enforcement, and Brian Smith, of the American Bird Conservancy, organized the penpal project to connect students in Appalachia with students in Colombia because both regions are dealing with forest fragmentation caused by strip mining in Appalachia and coffee plantations in Colombia.

A bird called the cerulean warbler migrates between Appalachia and Colombia and needs 400 acres of unbroken forest for its habitat.

“It makes a 3,000-mile journey every fall and ends up in the Andes mountains and makes a return trip in the spring,” said Smith.

Smith said the forest-dwelling birds, which weigh about a third of an ounce, were almost on the endangered species list four years ago.

Guilbaud-Cox said the penpal letter project is a great example of global collaboration.

“Nature brought these two communities together,” said Guilbaud-Cox. “Then in the end the students will realize they have a lot more in common than not.”

Donour said the penpal project demonstrates to students the impact that one person can have on a global issue.

“This is an opportunity to address an environmental issue on a global scale,” said Donour. “The activity offers our students the ability to make not only a difference in their own community by reforesting areas of abandon stripped land but also to address it at a global level because of the impact deforestation has had on the habitat and therefore migration patterns of the cerulean warbler.”

Donour said the penpal activity was an additional link for students to form a connection with young people in Colombia that are addressing environmental issues similar to those being faced in eastern Kentucky.

Brenda Quillen, a Spanish teacher at LCCHS, said the penpal project gives students a way to apply what they have learned in class.

“This has given us an opportunity to experience their culture and learn how we are experiencing what they are going through first hand,” said Brittany Frazier, a senior at LCCHS. “We really hope this penpal program is a successful one and the cerulean warbler can be used as an ambassador to tie the two (areas) together.”

As part of UNEP’s seven billion tree campaign, the Appalachian Regional Reforestation Initiative (ARRI) will plant 38 million trees in the next three years.

ARRI, which is a joint initiative between the federal Office of Surface Mining Reclamation and Enforcement and state mining agencies, and the Appalachian Coal Country Watershed Team have joined this year to plant trees on 10 sites across Appalachia, including one site at Carcassonne.

The 12 LCCHS students planted 40 American chestnut trees at an old reclaimed strip mine at Carcassonne on March 28. Five days earlier, more than 50 volunteers planted 4,000 hardwood seedlings on the site.

James River Coal Co. employees prepared the area for planting by dragging a “rip bar” behind a bulldozer and plowing it vertically up and down the land with a spacing of eight feet by eight feet. The land was then ripped again in a perpendicular direction to loosen the soil before the trees were planted.

“Plant the right tree at the right place at the right time,” Guilbaud- Cox told the students. “Do your research before you plant that tree. It’s not enough to plant a tree but to make sure it survives.”

Guilbaud-Cox said trees are valuable for many more things than as resources used in construction, ship building or fuel.

“The goods and services provided by forests are worth billions, if not trillions of dollars to the global economy,” said Guilbaud-Cox. “They help conserve soil and water, purify the air we breathe, provide genetic resources and natural medicines, prevent desertification, protect coastal areas, and control avalanches.”

Guilbaud-Cox said planting trees remains the cheapest way of drawing carbon dioxide out of the atmosphere.

“In one year an average tree inhales 26 pounds of carbon dioxide and exhales enough oxygen for a family of four,” she said.

Guilbaud-Cox said about 32.12 million acres of forest are lost each year.

“All of us need to do our part to ensure that this precious natural resource is replenished to meet the needs of the planet’s growing population,” she said.