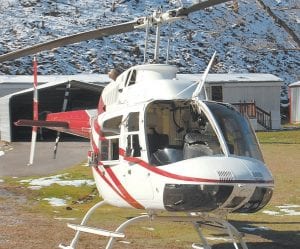 UNLIKELY LANDING PAD — This helicopter was surveying power transmission lines for a coal company when it ran into a “static wire,” broke its windshield, and was forced into an emergency landing near Isom. The helicopter’s pilot suff ered a cut to his face. Two passengers escaped injury. See story, Page 13. (Photo by Sally Barto)