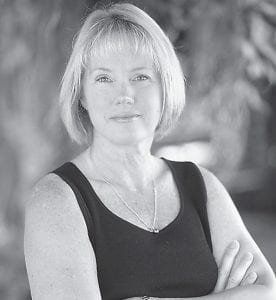 Audiologist Elizabeth Alsgaard is seen outside of her home in the Playa Vista area of Los Angeles. Miserable in menopause, Alsgaard pondered an awful choice: drenching hot flashes or hormone therapies that might raise the risk of cancer. (AP)

EDITOR’S NOTE: Ten years and $2.5 billion in research have found no cures from alternative medicine. Yet these mostly unproven treatments are now mainstream and used by more than a third of all Americans. This is one in an occasional series examining their use and potential risks.

Miserable in menopause, Elizabeth Alsgaard pondered an awful choice: Drenching hot flashes or hormone therapies that might raise the risk of cancer. What former actress Suzanne Somers raved about held much more appeal — custom-mixed “bioidentical” hormones, just like ones the body makes.

“Anything I can put into my body that’s natural has to be better,” said Alsgaard, a California audiologist who admitted having “no knowledge base to go on other than fear” when she took Somers’ advice.

Millions of women have tried custom-compounded hormones or herbal supplements like black cohosh and red clover since 2002, when a big federal study found risks from traditional hormone replacement therapy, or HRT.

Alternative remedies are especially popular with upscale, educated women who like to research and find their own solutions to medical problems. They like the idea of personalized treatments versus off-the-shelf prescription drugs.

However, instead of a safer option, they are getting products of unknown risk that still contain the estrogen many of them fear, women’s health experts say.

She and other experts explain:

— “Bioidentical” is a marketing term that has no accepted medical meaning. Its implied benefit is not unique to alternative remedies; many prescription drugs contain hormones that chemically match estrogens and progesterones made naturally by the body.

— Custom-compounded hormones are not approved by the federal Food and Drug Administration and have not been proved safe or effective. They may carry the same cancer and heart risks as traditional treatments and have had even less testing to find out.

— Hormone preparations do not need to be customized for each woman; a few standard doses work for almost everyone, medical experts say. The saliva tests that some women are given to tailor formulas are of dubious value because hormone levels fluctuate widely throughout the day.

— Compounding pharmacists use such different methods that a customized prescription can contain widely varying amounts of hormones depending on who fills it.

— Many compounders use estriol, a form of estrogen not approved for sale in the United States. The FDA is in a battle with compounding pharmacies over its use.

“Women need to understand there’s no rigorous evidence these preparations are any more effective or any safer than traditional hormone therapy. In fact, there’s much less evidence for efficacy and very little research on long-term safety,” said Manson, who has no industry ties and was a key researcher in the big federal study that warned women in 2002 of the health risks from long-term hormone use.

For years, medical groups have warned against customcompounded hormones. The American College of Obstetricians and Gynecologists has denounced claims about their safety. The American Medical Association has urged more FDA oversight. The Federal Trade Commission has filed complaints against online sellers who made health claims for natural progesterone creams without supporting evidence.

In 2001, the government tested 29 products from compounding pharmacies and found that one-third did not meet standard quality benchmarks, including potency problems, Manson writes in her book, “Hot Flashes, Hormones and Your Health.”

That has not stopped their popularity, and Somers has promoted them in several best-selling books and on “The Oprah Winfrey Show” earlier this year.

“I laugh when they call me a quack,” said Somers, who applies hormone creams vaginally and on her arms and takes some 60 supplement pills each day. In a phone interview, Somers said she is not trying to play doctor but to share with women what worked for her.

The issue flared last year, when the FDA declared that custom-mixed hormones were no safer than traditional treatments and warned pharmacies to stop using estriol, which is not approved in the United States for any use. (Most traditional menopause therapies use a different form of estrogen with a similar name — estradiol.)

The industry claimed it was being persecuted and fought back. In full-page ads in major newspapers, several alternative medicine groups claimed that estriol is safe, criticized “synthetic, hyper-expensive” prescription drugs, and asked, “Why is the FDA so hostile to ‘natural’ medicine?”

There are several thousand compounding pharmacies in the United States and hormones are a significant part of their business, said L.D. King, executive director of the International Academy of Compounding Pharmacists in Missouri City, Texas. No one knows how many women use these products, but “we believe the FDA action on the estriol issue would have affected hundreds of thousands of women,” King said.

A group of nine compounding pharmacies sued the FDA. After a murky ruling by a federal court in Louisiana centering on federal versus states’ authority, neither side appealed, King said.

“It gets complicated and there’s not a win,” he said. “We continue to advocate that FDA’s action is wrong.”

Alsgaard was not aware of the flap. She was 52 and living in San Diego when she stopped taking birth control pills, and menopause symptoms “hit me like a brick wall.” Her doctor, a specialist in women’s health, urged traditional hormone replacement therapy.

“She was just so aggressive it really flipped me out,” said Alsgaard, who feared a cancer risk from the pills. After reading one of Somers’ books, Alsgaard went to a different doctor specializing in bioidentical hormones.

“She spoke at a physician’s level, talked about metabolic things I didn’t understand and sold me a couple hundred dollars of supplements I never took,” Alsgaard said. “I was so desperate it was like, ‘OK, OK, just give me whatever I need.'”

Although Alsgaard did not use the supplements, she did spend about $1,000 for saliva tests, hormone creams and custom-compounded hormone pills the doctor prescribed. Six months later, she was still miserable.

Disgusted with the doctor and in the middle of moving to Los Angeles, she found a new doctor and asked again for a natural remedy, believing those are safer than traditional hormone pills.

“He did a lot more extensive workup on me and put me on a bioidentical implant, a pellet implanted into the hip,” she said.

Pellets containing estrogen, testosterone or both are the latest craze in this field. They are implanted just under the skin every few months under a local anesthetic, and are not FDA-approved for treating menopause. Problems that have been reported include difficulty removing the pellets if the therapy has to be discontinued, infection or pain at the injection site and fluctuating blood levels of estrogen, including a potentially high cumulative effect over several years.

Alsgaard did not know the pellets lack FDA approval. Her first, implanted in April, has done the trick, she said.

“I feel awesome. I have no night sweats, no hot flashes, no mood swings. After feeling so terrible, I’d forgotten how good it feels to feel normal,” she said.