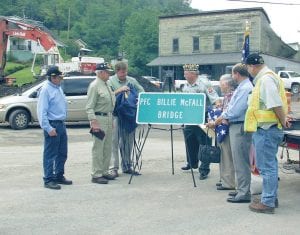 A re-dedication ceremony and ribbon-cutting for the Private- First-Class Billie McFall Bridge on KY 113 at Millstone took place August 1 at the site of the new two-lane bridge. The date is exactly 58 years after McFall, a Letcher County native, died on a battlefield in Korea. What used to be called the Millstone-Democrat Bridge was re-named by the Kentucky Transportation Cabinet at the request of Letcher County veterans groups. Veterans asked the Letcher Fiscal Court for a resolution naming the structure the PFC Billie McFall Bridge. PFC McCall was the first Letcher County native confirmed to have been killed in action during the Korean War. He “gave his all” on August 1, 1950. Pictured from left are Buddy Grubb, president of the Letcher County Veterans Memorial Museum; James Duncan, a veteran of the U.S. Army and a prisoner of war in the Korean War; Letcher County Judge/Executive Jim Ward; Darrell Holbrook, secretary of the Letcher County Veterans Memorial Museum; Mildred Wilder, first cousin of PFC Billie McFall; Kevin Damron, chief district engineer for Highway District 12 in Pikeville, and Jay White, Highway District 12 resident engineer for Letcher County.