US aims at its deadliest drug problem: painkillers 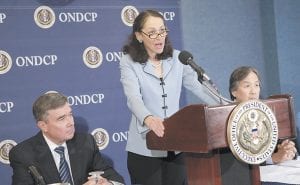 The federal government on Tuesday announced its first-ever comprehensive strategy to combat the abuse of oxycodone and other opioids, aiming to cut misuse by 15 percent in five years. That goal may sound modest, but it would represent a dramatic turnaround: Emergency room visits from prescription drug overdoses doubled from 2004 to 2009, when they topped 1.2 million, according to federal health officials.

“To say we are going to do away with the problem in five years, we cannot do that,” said Dr. Roland Gray, medical director of the Nashville-based Tennessee Medical Foundation and a Food and Drug Administration adviser on addiction issues. “I think they are headed in the right direction.”

The new approach will depend on education, stepped-up law enforcement and pill- tracking databases, with particular emphasis on Florida, where 85 percent of all oxycodone pills in the nation are prescribed. Many of those end up along the East Coast and in Appalachia.

“The key is that everyone realizes there is no magic answer to this,” Gil Ker-