Use grill to keep things speedy

By RYAN KING The Associated Press 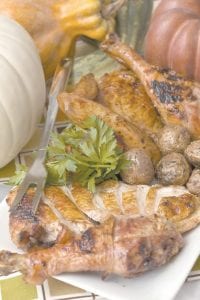 You can greatly reduce your turkey cooking time while freeing up your oven this Thanksgiving by using a knife and a grill. By carving up your bird into large pieces then grilling this maple-soy glazed Thanksgiving turkey you can have a turkey ready in about an hour. Serve with these grilled potatoes done alongside the bird on the grill. (AP Photo/Larry Crowe)

Don’t have the time or oven space to do the bird this year? With a sharp knife and a grill, you can free up your oven, cut your roasting time from the standard three to four hours down to one, and get some tasty taters, too.

The trick is to carve your turkey before it is cooked. Breaking it down into large pieces (the breasts, wings, thighs and legs), not only gives you greater versatility in how you cook it, it also saves considerable time (smaller pieces cook much faster than a whole bird).

This approach also lets you cook the different parts of the turkey to different temperatures. Most people say breast meat is best cooked to 160 F (the temperature continues to rise after the meat is removed from the heat), while thighs should reach 170 F.

To break down the turkey, start at the legs, cutting through the loose skin between them and the breasts. Hold both legs and bend them back toward the spine until the thigh joint pops out of the hip. Leave the legs twisted in this position.

To remove the legs and thighs, turn the bird so the back is facing up, take your knife and cut parallel to the spine and straight through the meat being sure not to leave any flesh on the bird.

You can separate the leg from the thigh easily. Set the piece skinside down on the cutting board. There is a whitish line on the skin that separates the different leg muscles. If you cut though that line your knife should go through the joints between the leg and the thigh.

To remove the wing, pop the joints and cut through the opening the joint makes after it pops out of the socket.

Arrange the meat on a sheet pan and refrigerate until ready to grill.

Heat a grill to low.

In a small bowl, combine the maple syrup, soy sauce, cider vinegar and ginger. Set aside.

Use a brush to baste the turkey with the maple-soy mixture, then cover the grill and cook for 10 minutes. Flip the meat and continue cooking, covered, basting every 10 minutes until the turkey is cooked, between 1 to 1 1/2 hours.

In a large bowl, combine the potatoes with the oil, thyme and oregano. Toss to coat evenly, then season with salt and pepper.