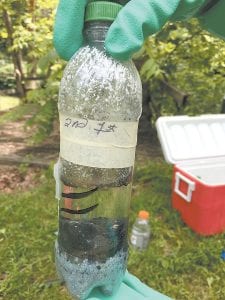 The process of cleaning up the eight “meth labs” took about six hours because of the volatile nature of the chemicals, said Deputy Sheriff Barry Engle.

The Letcher County Sheriff ’s office has charged a UZ man with possession of a firearm by a felon, possession of marijuana, manufacturing methamphetamine and possession of meth precursors after serving an arrest warrant for misdemeanor fourthdegree assault.

Sheriff ’s deputies and the Kentucky Department of Probation and Parole served the warrant June 1 on Eric Frazier, 35, of Harbor Drive. According to Deputy Barry Engle, police had received a tip that Frazier was manufacturing meth and searched the house when they served the arrest warrant. Engle said deputies found a shotgun, marijuana and meth precursors inside the house, then found eight active meth labs in a cooler near the residence.

Kentucky State Police Drug Enforcement and Special Investigation detectives dismantled the labs. Engle said the process took about six hours because of the volatile nature of the chemicals.

Frazier was lodged in the Letcher County Jail under a $250,000 cash bond.