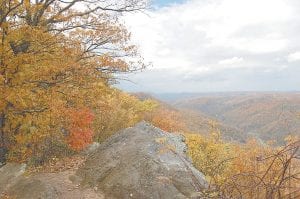 THE BEAUTY OF FALL — Cloudy weather has been the norm in Letcher County for most of this fall, but overcast skies couldn’t dim the beauty of the changing leaves when this photograph was taken from an overlook on Little Shepherd Trail on October 23. (Photo by Sally Barto)

There’s no road to the summit of Mount Rogers, elevation 5,729, Virginia’s highest point.

To get here on foot, you climb four hours through boulder-dotted meadows and hardwood forests until, at last, you enter an environment unfamiliar to lowland dwellers.

The 700-acre cap of this mountain is a blustery place on an overcast fall afternoon. It’s the domain of red spruce, Fraser firs, rhododendrons, ferns and moss, jutting boulders and thick black bootsucking mud.

On this day the rare creatures that dwell at Virginia’s highest levels are neither seen nor heard — not the Northern flying squirrels or the Weller’s salamanders or the cold-adapted insects or the elusive spruce-fir moss spider.

But visible or not to the casual hiker, these unusual species are here. To understand why, it helps to know how this mountain came to exist.

Roughly 760 million years ago and several thousand miles away, intense heat bubbled deep under the Earth’s surface. It stretched and cracked the Earth’s crust, and erupted in profuse lava flows that cooled into chunks of volcanic rock. 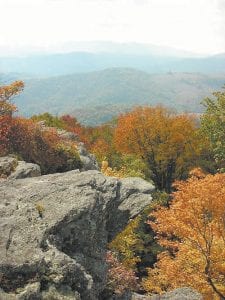 This photograph on Mount Rogers, Virginia’s highest point at 5,729 feet, was taken by Daniel White and appears on the website blueridgeoutdoors.com. (Photo by Daniel White)

As land masses broke apart and drifted, that rock came to rest far from its origin.

Several million years later, glaciers and lakes formed and carried a layer of much smaller rocks to the area where the big rocks lay. Many ice ages after that, all that rock began to take the shapes we know today, in three Southwest Virginia peaks connected by a series of ridges: Mount Rogers, Whitetop Mountain and Pine Mountain.

As the latest ice age ended about 10,000 years ago, cold-loving plant and animal species moved upward to survive.

And today, scientists describe Virginia’s highest places as “islands” of survival for plants and animals more typical of the northern United States and Canada.

The shortest, allegedly easiest hike to the top of Mount Rogers is a nine-mile round trip that begins at Massie Gap in Grayson Highlands State Park.

Until the 20th century, this land was densely forested with American chestnut trees. But after blight killed the last of those chestnuts and loggers hauled away the wood, the area became parkland — a highland gem whose craggy boulders offered spectacular views of 70 miles or more.

Since the middle of the last century the land has been kept meadowlike, with planted grasses and a herd of wild ponies to keep them cropped.

The Appalachian Trail rises through these artificial balds and passes through stands of such cool-loving trees as yellow birch, sugar maple and American mountain ash.

A half-mile from the summit, a spur trail comes off the Appalachian Trail, and this is the path to the top.

It’s somewhere in here that a hiker realizes the hardwoods have given way to deep green conifers, the tall red spruces and Fraser firs.

Those firs have their own story.

Unlike the other, northerly species on this mountaintop, the Fraser fir gravitated here from the south. Mount Rogers is the northernmost edge of the Fraser fir’s natural range, said biologist Chris Ludwig of the Virginia Division of Natural Heritage, part of the Department of Conservation and Recreation.

But the landscape is changing. A tiny introduced pest, the balsam woolly adelgid, has devastated Fraser firs throughout the Southern Appalachians.

The firs at Mount Rogers are among the healthiest survivors, with a mere 70 percent or so mortality. Still, their bare, fallen trunks litter the top of the mountain like skeletons.

Scientists are watching, too, to see how climate change will affect this place. As temperatures rise, so do cold-loving plants and animals, following the cooler temperatures to the tops of mountains. Eventually, it stands to reason, they’ll run out of space.

As tranquil and solemn as the mountaintop can be late on a fall afternoon, it’s in transition — just as it has been for eons.