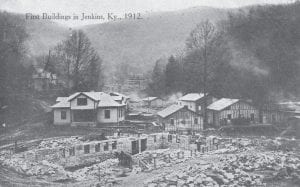 This 1912 postcard courtesy of the University of Kentucky Library shows the first buildings in Jenkins, which hopes to draw tourism through its coaltown history.

Jenkins is billed as “The Town That Was Built on Coal,” but much of the “ black gold” that drew Consolidation Coal into the Elkhorn Valley to build the city just over 100 years ago has long since been carried away as billions of tons have left the region on coal trains. But, according to a new plan, the city’s coal heritage, as well as the legendary tales of the good old “mountain dew” that has famously been made in mountain hollows and hideaways, could turn the city into a regional tourism center and have a major impact on the economy.

The Jenkins City Council received a presentation that could have a very positive impact on the city’s future at its December meeting as representatives of Virginia Tech’s Community Design Assistance Center joined with Sarah Gracey of the Kentucky Division of Forestry to present a plan that could open up the city to tourism. They plan to accomplish this by tying in to the history associated with one of Jenkins’s most famous, or possibly infamous residents and Kentucky’s most famous drinkable folk art product by creating the Devil John Wright Moonshine Trail.

The project was made possible by $38,000 in development funding from Governor Steve Beshear that will be administered through the Kentucky Department of Highways. Mayor G.C. Kincer welcomed the presenters and thanked Governor Beshear and Highway Commissioner Tony Wilder for the funding and Jill Hatch who wrote the grant proposal.

Lara Browning of the Community Design Assistance Center introduced her group and told the council the plan is nearly complete but still had room for some changes and additions. She said the purpose of the project is to look at ways that Jenkins can establish itself as a trail tourism destination and pointed to tie-ins with the Pine Mountain Trail and biking trials to combine with the Devil John Wright Moonshine Trail. The project will highlight other historical connections in Jenkins including the city’s coal heritage, country music stars such as Gary Stewart, public art projects, the mountain scenery surrounding the city, and moonshine.

Mountain Comprehensive Health Care Corporation Chief Executive Officer Mike Caudill told the council there has been a renewed interest in the once illegal beverage throughout the nation and if it is produced legally, it is definitely a tourist draw. Caudill, who has a still he has used in demonstration projects at the Mountain Heritage Festival and other venues to create moonshine, said the distillation of “corn liquor” in the old-time still process is heavily taxed and closely regulated, but pointed to several legally operating stills in Gatlinburg, Tenn., that he said were turning a very good profit, as well as tour buses coming to eastern Kentucky to see and sample the beverage.

Legally produced moonshine is suddenly very chic in national cocktail venues, and is featured in websites and magazines from such leaders in food and drink as Martha Stewart Living Radio Show, Men’s Journal, Atlanta Food and Drink, and Ole Smokey Mountain Moonshine Cocktails. Many large city food and drink establishments feature moonshine, or corn liquor cocktails, on their drink menus and news of moonshine cocktails selling for as much as $40 each on the East Coast have recently surfaced.

The Virginia Tech presentation featured a series of series of slides that showed design plans and possible scenarios for the city. One of the things stressed was making the city more pedestrian friendly, and Browning told the council that while the lack of a hotel was not a positive, it could be overcome and one of the suggestions in the plan was to turn part of the old Jenkins Clinic Hospital building into a hostel.

The creation of a “pocket park” around the Jenkins Veterans Memorial was discussed, but Mayor Kincer and several council members said that moving the memorial to created added green space for the park and a water wall would probably not be feasible. University of Kentucky Extension Agent Shad Baker reminded them to include the Old Fincastle Road across Pound Gap, which he said was one of the oldest roads built by taxpayer funds in the area. The overhead wires in the city were discussed as an hindrance to the project, but Councilman Rick Damron said that while American Electric Power had been adamant about not wishing to bury the wires a few years back it is possible its position has softened.

The project includes some things that are already in use in the city such as the new swimming pool and the Dave Zegeer Railroad Museum and others that are still in the planning states such as the Lake Walk. Jenkins is said to be well situated for tourism, being nearly in the center of a relatively large population area, with good access to highways. Like many towns in the coalfields, Jenkins has seen setbacks as the coal economy has declined but tourism is now seen as a significant piece of the economic puzzle.

Mayor Kincer told the council and guests that he believes Jenkins is in the best position of any city in the state to take advantage of tourism. He said the combination of existing hiking trails and the development of bicycle trails and the Devil John Wright Moonshine Trail will put the city in a good place. He pledged to work as hard as he possibly could to make it happen.

In other business, Fifth District Magistrate Wayne Fleming, who represents Jenkins on the Letcher County Fiscal Court, approached the council and asked that Straight Row in Dunham be renamed in honor of James Curtis Mullins, who died in the Korean War. Fleming said Mullins enlisted at the age of 17 and was killed in 1950 after a month in Korea. His body was not recovered for 62 years and is presently interred in a North Carolina veterans’ cemetery. His remaining family members live nearby. Mullins was the son of the late Corbett Mullins, who lived in Dunham and was employed by Beth- Elkhorn Corp. The council voted unanimously to rename Straight Row to honor Mullins.

Paul Nesbitt of Nesbitt Engineering told the council that the SKADA (computer monitoring system) on Phase III for the Jenkins Waterline Replacement Project is now working and will soon be tied in with city computers and handheld devices so that city officials can monitor the system. New water meters will transmit information directly to a recording device as well, so that city workers can conduct meter reading by driving by the meters and Nesbitt said the new meters will be much more accurate in determining the flow of the city’s water.

Nesbitt also said that Phase III of the Payne Gap Water Project has been advertised for bid and bids will be opened December 20 for the $3 million project. Bids for Phase III of the Jenkins Sewer Line Project for the Dunham area will be opened on December 18 and Nesbitt told the council he expects to have a recommendation for the council on the low bid at the next meeting.

Mayor Kincer told the council the maps for the proposed annexation are not complete and asked that the discussions be tabled until the council has the maps in front of them. Kincer said he wanted to be certain that everyone understands that nobody’s property or homes will be affected and the proposed annexation will only affect unoccupied areas. It is meant to fill in some empty spaces and eliminate islands of city property created by the construction of US 23.

The city swimming pool winterization is now finalized and windows and doors have been installed on the restaurant in the community center site. Flooring is still to be installed, but the interior is 90 percent complete.

The city transported 110 tons of solid waste to the landfill and collected 671 blue bags of recyclable materials.