Vaccine opposition has ebbed and flowed over the centuries 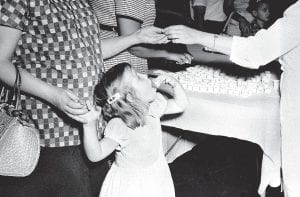 In this July 1962 photo, a girl swallows a lump of sugar coated with a dose of the Sabin polio vaccine served in a paper cup in Atlanta, Ga. (AP Photo)

They’re considered one of mankind’s greatest medical achievements, yet people have balked at vaccines almost since the time of the first vaccination — in 1796, when an English country doctor named Edward Jenner inoculated an 8-year-old boy against smallpox.

In the mid-1800s, people protested in the streets of Victorian England after the British government began requiring citizens to get the vaccination. Many opponents mistrusted doctors and were wary of a medical treatment they didn’t understand. In the early days, the closely related cowpox virus was used to immunize people against smallpox.

“People were afraid that if you got the cowpox vaccine you would turn into a cow,” said Dr. Paul Offit, a vaccine researcher at Children’s Hospital of Philadelphia who is an outspoken critic of anti-vaccination groups.

More than a century and a half later, there’s still an undercurrent of vaccine dislike and distrust in the United States as illustrated by the measles outbreak that started in December at Disneyland — likely brought in from overseas as has been the case in recent years. Many of those who got and spread the highly contagious illness hadn’t gotten the childhood shots. 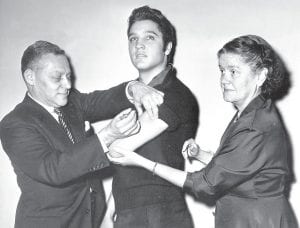 All this despite medical science’s proven successes in wiping out not only the much-feared smallpox and polio, but nearly eliminating other serious illnesses like diphtheria, German measles, lockjaw and mumps in the United States. Through it all, anti-vaccine sentiments have ebbed and flowed.

“It is fair to say that for as long as we’ve had vaccines, governments have worked to promote those vaccines — and segments of the population have resisted,” said Jason Schwartz, a medical historian who studies vaccine policy at Princeton University.

In the U.S., opposition to vaccines was most intense in the late 1800s and early 1900s, said Susan Lederer, chair of medical history and bioethics at the University of Wisconsin.

That’s when organizations like the Anti-Vaccination League of America and the American Medical Liberty League led the charge. Some used photos depicting vaccinated children with scars and missing limbs and eyes, claiming immunizations were to blame.

“For a long time in history, people treated antivaxers as irrational and antiprogress — kind of a lunatic fringe. But there were good reasons to be leery of vaccines” back then, she said.

Vaccines sold at the time were unregulated, and many were not only ineffective but also risky because of how they were made or given. Some were not sterile and infected children with other germs, like tetanus.

But opposition faded. Legal challenges to schoolattendance vaccination laws were shot down by the U.S. Supreme Court. Vaccine makers came under more federal regulation, and the shots were better and safer. And some of the richest and most influential opponents died off.

By the end of the 1930s, resistance had declined dramatically. And by the 1950s, the pendulum had swung. Medical science was widely respected, doctors were considered sages, and one of the nation’s greatest heroes was Dr. Jonas Salk — inventor of the polio vaccine.

Polio — a crippling and potentially fatal infectious disease — terrified the nation. In the early 1950s, outbreaks caused more than 15,000 cases of paralysis each year.

When researchers in 1955 showed Salk’s vaccine worked, the news spurred jubilation. One medical leader pleaded with adults not to grab the limited doses of the vaccine.

“Give the children priority,” begged Dr. Dwight Murray, chairman of the American Medical Association’s board of trustees.

Enthusiasm for the polio vaccine persisted even after news surfaced — only weeks later — that some early batches had caused polio in children.

The anti-vaccine movement overall kept a fairly low profile until 1998, when a British medical journal published a now discredited study in which researcher Andrew Wakefield and his colleagues suggested a link between the combination measles- mumps- rubella vaccine and autism.

It was a small series of observations in just a dozen children, not a full medical study. But it exploded in the media, and resulted in a big drop in immunization rates in Britain. The effect was not nearly as dramatic in the U.S., but researchers estimate that as many as 125,000 children born in the late 1990s did not get the shots because of the report.

The United States then was on the verge of seeing the end of “homegrown” measles — health officials declared that goal accomplished in 2000. Still, the Wakefield study knocked even prominent U.S. vaccine experts off balance and emboldened vaccine skeptics and some legislators to raise alarms about vaccines. The years 1998 and 1999 marked a low point for those who championed vaccines, Schwartz said.

But the situation soon changed. When other researchers did larger and well-designed studies, they found no link to autism. Wakefield’s work was discredited and his paper retracted. But all this happened during an era of growing rates of autism diagnoses, and an array of parents groups and some celebrities continued to believe vaccines were the cause.

Overall, vaccination rates for kindergarten pupils have held steady across the country, although health officials have noted certain communities have seen increasing numbers of families who have refused to vaccinate their children.

The situation sat at a low boil until the Disneyland outbreak. It struck a nerve with public health advocates, parents who support vaccination and even comedians.

“I’ve never seen this level of anger at parents who’ve chosen not to vaccinate their children,” Offit said.