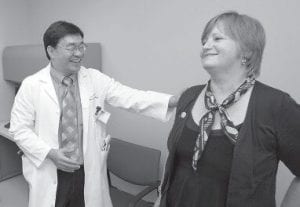 Dr. Patrick Hwu, left, talked with his cancer patient Hilde Stapleton during an examination last week at The University of Texas MD Anderson Cancer Center in Houston. Stapleton has been receiving an experimental treatment for melanoma. (AP Photo)

For the first time, a novel treatment that trains the immune system to fight cancer has shown modest benefit in late-stage testing against the deadly skin cancer melanoma.

The approach is called a cancer vaccine, even though it treats disease rather than prevents it. In a study of about 180 patients already getting standard therapy, the vaccine doubled the number of patients whose tumors shrank, and extended the time until their cancer worsened by about six weeks.

“Although the differences may seem small, we need to understand that in many cancers, our progress has been built in small incremental changes over time,” said Dr. Len Lichtenfeld of the American Cancer Society.

Trends in the study suggest that the vaccine also may improve survival, but patients need to be followed longer to see if this proves true, said Dr. Douglas Schwartzentruber, cancer chief at Goshen Health System in Indiana. He led the study and gave results May 30 at an American Society of Clinical Oncology meeting.

The National Cancer Institute developed the vaccine, which has not yet been commercially licensed. The institute sponsored the study, along with Novartis AG, which makes interleukin-2, the standard treatment.

Interleukin-2 stimulates the immune system to make specialized cells that attack cancer. However, only 10 to 15 percent of patients with advanced melanoma see their tumors shrink with this harsh treatment, which causes severe flu-like symptoms and must be given in the hospital.

The vaccine contains a substance found on the surface of many skin cancer cells. The idea is to help the immune system recognize this as a threat and provoke it to attack.

“The vaccine trains the soldiers and the interleukin-2 multiplies them into an army,” Schwartzentruber explained.

In the study, people were given the vaccine or a dummy shot a day before starting intravenous interleukin-2 treatment. This was repeated about four to six times every three weeks.

About 22 percent of patients given the vaccine plus interleukin-2 saw their tumors shrink by half or more, compared with 10 percent of those getting interleukin-2 alone. Vaccine users saw their cancer stabilize for three months versus half that time for the others.

One safety issue: 15 patients receiving the vaccine developed a heart rhythm problem that was successfully treated with medicines, Schwartzentruber said.

Researchers will tweak the vaccine more to try to improve the number of people who benefit, said Dr. Patrick Hwu, melanoma chief at the University of Texas M.D. Anderson Cancer Center in Houston. It now can only be given to people with a certain tissue type — about half of those with melanoma.

The results also need to be confirmed in a longer, bigger study, Lichtenfeld said.

“Many of us are cautious in interpreting the results of vaccine studies in melanoma,” he said. “We’ve had so many signs of success in the past that proved to be false starts.”

The benefit was real for Hilde Stapleton, 53, of suburban Houston, who received the vaccine in 2007 after battling melanoma for eight years. It did not cure her but got rid of the tumors that had spread to her lungs. Other treatments since then have put her disease in remission.

“I feel just fantastic,” she said.

Melanoma is the most serious form of skin cancer. Last year in the United States, there were about 62,480 new cases and 8,420 deaths from the disease.