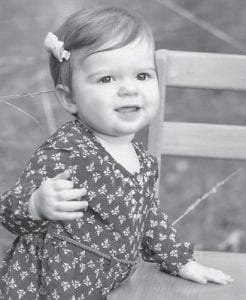 One-year-old Roslyn Alexandra Crawford is the daughter of Dustin and Jenna Crawford of Indiana. She is the granddaughter of Regina C. Stivers and Robby Crawford, and John and Patricia Dovyak of Pennsylvania. Her greatgrandparents are Bennett and Linda Combs of Ice.

Valentine’s Day is celebrated in schools a little differently today than when I was in grade school.

In the 1940s, everyone had an envelope with his or her name on it and taped to the wall, and if you wanted to give someone a Valentine, you put it in the envelope. If you didn’t like a person, you didn’t have to give them a Valentine.

Some kids were bullies, some were braggarts, some were obnoxious, but most were good, decent kids. The bad ones got few Valentines.

One boy in our class at Whitesburg had a medical problem, and everyone shied away from him. One year he didn’t get any Valentines, and I saw Mrs. Kilgore erase her name from a few, put his name on them, and give them to him.

The boy later graduated, got his medical problem fixed with surgery, got a master’s degree and then a doctorate. He was one of the top educators in Cleveland, Oh., when he died. His name was Donald Gene Bates.

When my kids were in grade school I made them give everyone in the class one Valentine. If they had someone special in their class, they worked for the money to buy them that special Valentine.

Today the classrooms are decorated for Valentine’s Day. I’m not even sure if they exchange cards anymore.

I saved all my Valentines from grades 1 through 6. I’m going to put a few on my Facebook page if you’re interested in seeing them.