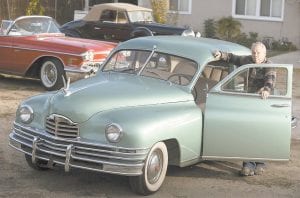 These rare beauties are stars themselves, bringing an authenticity and aesthetic charm to the screen that no computer graphics can match.

“These cars, they’re as important as the buildings and clothing and makeup in establishing the time and place,” said Leslie Kendall, chief curator of the Petersen Automotive Museum in Los Angeles, which has three cars from “Gangster Squad” on display this month. “If you want to lock a movie scene in, use the right car and they will immediately get it.”

Picture car coordinator Tim Woods spent 12 weeks working with “Gangster Squad” director Ruben Fleischer to get the automotive look of 1949 Los Angeles just right. A few of the vintage cars came from Woods’ own personal collection. He called on Southern California car collectors (and a few local junkyards) for the rest.

Most of the cars in the movie were lovingly loaned by private owners, many of whom drove the priceless vehicles during filming.

“It’s always good to have the owner of the vehicle to drive the car, because it’s their baby,” said Woods, 50, whose 1946 Chevy pickup, 1947 Ford sedan and (Gosling’s) 1941 Ford Deluxe Convertible play roles on screen.

Garvin Kotzin, 63, lent two of his babies to the film, including that rare ‘36 Olds (only 32 made). The retired entrepreneur showed off the vintage convertible recently on a dusty lot in a suburban Los Angeles neighborhood.

The L.A. native started collecting cars at 16, when he took out a loan to buy a 1927 Franklin for $800 that he fixed up and drove to school. As his terrarium-manufacturing business grew, he invested in other vintage vehicles: a 1934 Packard, a cherry red-and-white 1958 Cadillac convertible with pointy fins, and his favorite, the 1936 Oldsmobile, which also appeared in “Hoover,” “Changeling” and “The Aviator.”

Kotzin has been loaning his cars to the entertainment business for 12 years. They’ve played roles in photo shoots, music videos, weddings and various movies. He insists on driving the cars himself, and he spent several weeks driving his and a dozen other vehicles on set during the filming of “Gangster Squad.”

Dressed alternately like a chauffeur and a deliveryman, Kotzin rolled in a 1947 Cadillac limo, a 1940 Cadillac and a 1937 Chrysler. He drove a taxicab, a police car and a diaper-delivery truck.

Owners of movie-star cars get paid around $300 a day, he said.

Kotzin got into the business through his buddy Chuck Shubb, who calls himself a picture car supplier. Shubb owns some 60 classic cars and belongs to six car clubs, including the Lincoln Club, where he serves as a judge. He collected cars as a hobby while running his construction company until a chance meeting with an art director in 1985. She borrowed a few of his cars to use in commercials and music videos, and soon after, Shubb’s movie-car business was born.

He keeps his vehicles — from a 1914 Ford Model T to a 1929 Packard to a 1963 AMC Rambler — at various locations around the city and still gets under the hoods regularly. His staff includes a mechanic and a driver who moves the cars on a flatbed truck.

A soft-spoken 72-year-old who recites his cars’ years and makes like the names of beloved children, Shubb shops swap meets for rare parts and has a machinist make the ones he can’t find. He travels with his cars, though he lamented that so much production has moved out of the area in recent years.

Still, there’s one thing he won’t accept: “I don’t do wrecks.”

“They’re my babies,” he said. “They’re not replaceable.”

As the picture car coordinator, Woods has to do wrecks. They wrecked four classic 1949 Cadillacs in “Gangster Squad,” along with eight other cars.

“We blew them up, crashed them and destroyed them,” he said, adding that there was also “one unforeseen accident where we hit a real 2010 Ford taxi in the middle of the night.”

With rare exception, though, his team buys junkyard cars that don’t run, then modifies them for stunts — and destruction.

“The integrity of these cars is too much,” he said, adding that none of the working, cared-for vehicles was harmed during the making of the film.

“We never ever shot a hole in a single fender,” he said. “Those cars are down here in my office and they’re not even scratched or hurt. All bullet holes were CG.”

That’s good news for Kotzin, who draws the line at “no dancing on the hood.”