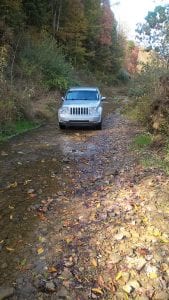 TO KINGDOM COME has long meant going to a faraway, inaccessible place, but the road at Kingdom Come Creek gives the phrase real meaning. Above, a Jeep crawls along the road, which is mostly a sand and gravel creek bed. Former Letcher County Judge/Executive Carroll Smith said the road splits his property and crosses the creek nine times. It is inaccessible to emergency vehicles and any vehicle that isn’t four-wheel drive, Smith told the Letcher County Fiscal Court on Monday. He is asking the court to do something about the road so his property can be protected. (Photo by Sam Adams)

Smith, a former Letcher County Judge/Executive, told the fiscal court at its August meeting that the road washes out when it rains, runs through the creek nine times, and is almost impassable to anything but high clearance four-wheel drive vehicles.

Smith said the road is public in that it serves a public cemetery and several homes, but it is unnamed and hasn’t been maintained since March 2016. He told the court if it would vote to abandon the road it would revert back to being private property, but warned the court members that it will be very expensive to maintain if they choose to keep it and perform regular maintenance.

The right fork takes adventurous travelers out at Bo Fork, the left fork at Henry Ison Hollow. Smith said it is almost impossible to travel in an emergency vehicle. This apparently includes state police cruisers.

Smith said that recently someone shot two of his cattle, and killed a pig. Vandals riding all-terrain vehicles poured acid on a calf, mutilating it. He said he picks up a lot of garbage on his property from people who ride four-wheelers, and some of the people who come on his property to ride are drinking, using drugs, or riding at extreme speeds.

Smith said that most people who ride in the area are law abiding, but that some are out of control. And due to the inaccessibility, the Kentucky State Police won’t come past the end of the paved road. It is impassable in a car, and the state police don’t have a four-wheel drive vehicle in Letcher County. He said that usually, only one trooper is assigned to the entire county.

Smith said one night when he stepped outside, someone shot at him. But when he called the police, the state trooper only came as far as the end of the paved road and then sat there with his lights on. He added that he was unaware that Sheriff Mickey Stines had added deputies to work a second shift. He said he knows that the sheriff’s department has four-wheel drive vehicles so he hopes they will come all the way to his property. Smith said it will still be difficult to get an emergency vehicle up the road.

David Boggs Jr., who said he was a deputy sheriff at one time, lives in the area and said the last time the road was actually in good shape was before the 1957 flood, and said he would like to see the county maintain the road. Judge/Executive Terry Adams said if the county keeps the road, it will maintain it. Smith again said it will be very expensive to maintain. The court voted to let County Attorney Jamie Hatton look at the ownership of the road, and court members will try to get more information on the situation before the next meeting.

In other business, District 2 Magistrate Sherry Sexton of the Economic Development Committee recommended that the court hold a public meeting to consider hiring an economic development director to serve Letcher County. The court voted to discuss the position of economic development director before the next meeting, but Adams said any meeting would have to be open to the public. He said if the magistrates can find an agreeable date, he will schedule a meeting and advertise it.

Earlier this year, Sexton suggested hiring an economic development director. Bridget Back, who was attending the meeting as part of the Tourism Committee, told the court that it might be a good idea if they met with Chuck Sexton, CEO of One East Kentucky. Sexton is a professional in economic development and represents the entire region. He attended last month’s regular meeting and said that every day, One East Kentucky works to represent the nine-county district it serves, which includes Letcher County. However, he said that most of the activity is done under the radar due to the extremely competitive nature of industrial recruitment.

The economic development committee recommended the court give $ 25,000 to the Letcher County Tourism Committee for the work it is doing. The court unanimously approved.

The court received information from representatives of Liberty National Insurance. Miranda Estep and Cynthia Hunter of Kingsport told the court the company provides insurance that allows for benefits in addition to those provided by the county. Those insured are billed at a group rate, but pay for the insurance themselves.

The court voted unanimously to approve several new hires in county departments. Judge Adams said that under the new administrative policy, new hires have to be voted on by the entire court, rather than just being hired by the county judge. The court also voted to renew its leasing arrangement with Mack to provide two new heavyduty trucks for the county. Under the lease arrangement, the county gets new trucks and returns the old ones, which are sold at public auction. In the past, the court has made a profit from the sale of the trucks.

The court voted to participate in a U.S. Department of Agriculture grant that will provide 35 percent of the cost to purchase a new dump truck. Adams said that between the grant and the low state contract price, the county should get a new truck for a relatively low cost to the county. Court members also voted to approve adding a cemetery road from each magisterial district to send to the Kentucky River Area Development District to be measured and added to the county road plan. Adams said the county will add five each month until it gets all the cemetery roads added.

Total of all funds : $1,623,459.54 the total water amount of water it purchases, due to leaks that were located and repaired by district workers. Lewis added that the amount should be reduced even further since workers also repaired a break in a 12-inch line that occurred during the recent billing period. He said the repair required the replacement of about 1,100 feet of line.

Lewis announced that there are issues with two chlorine stations, at the end of the line running along Highway 7 South and at the end of a line in the Deane area. Both areas are under boil water advisories. Bowman said the problem is the result of high temperatures and water supply, and that Bell Engineering has requested a quote for two booster chlorine stations for the system. The information will be forwarded to the district when it is received.

In other business concerning water supply, Bowman announced that the federal Department of Abandoned Mine Lands is conducting interviews for projects that have been submitted to it for funding, and a decision from AML concerning the development of an alternative source of water supply should be available within 30 days.

Bowman also said a potential grant is available through the U.S. Department of Agriculture’s Rural Development Agency’s Program Projects Grant that could be used for testing and environmental and feasibility review for an alternate source. The grant is capped at $30,000. The board is developing a small project to repair some problems areas in the system and will apply for a grant through USDA RD for that.

The board voted unanimously to pass Resolution 2019 to proceed with plans for the extension of water lines into the Roxana area to service homes there, and for the federal prison that has now been put on hold.

Bowman said there is still a serious need for water for the residents in the area, and there is still a possibility that the federal prison will be constructed. At last month’s meeting he recommended the board proceed with a geotechnical survey for the prison water plant that he said should be covered by existing AML funding.

The district is awaiting a response on a contract from Kingdom Coal to supply water to residents along Carbon Glow Road, who lost their water because of mining operations by the previous owners. Bowman said an existing court order requires that the residents be provided with water, either from line extensions or by hauling it to them.