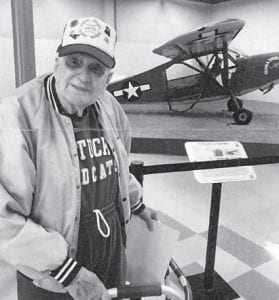 Everett Vanover stands near an L-5 aircraft, the first plane he flew in the 940s after he entered the military. The L-5 is on display at Travis Air Force Base, where he served for 13 years and recently visited with friends.

I took some friends on a bus trip to my last job I had in the Air Force at Travis Air Force Base, where I worked for the last 13 years of my career.

I could not believe my eyes. The base had grown so large since the 13 years I was stationed there.

I took my friends to the Travis AFB Heritage Center’s indoor and outdoor exhibits. The L-5 airplane I learned to fly in during the 1940s was on display there.

Bar” was the plane I flew in when we went to Japan. The C-118 that brought Elvis home is here, too.

It was getting late and I could not stop at the headquarters I worked in during those 13 years. It was wartime, and I was very busy. I was in charge of the base printing office.

I was also there when my boss, General Travis, was killed, and they named the base after him. He was my hero.