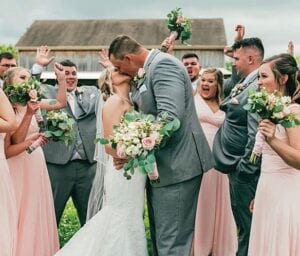 She’s seen her son injure his knee and miss the 2018 season when Kentucky won 10 games and then come back to play so effectively in 2019 that he’s been named the third best returning offensive lineman in the Southeastern Conference.

She’s seen COVID-19 totally disrupt everything about sports — and life — in our country and put the entire 2020 college football season in jeopardy.

“It’s hard to make that all up,” said Angela Young, the mother of UK senior offensive lineman Landon Young. “As a parent you hope your children grow up, get a degree, are able to support themselves and find a mate in someone who is equal.”

Young got married last week to Haleigh Johnson after initially meeting her in an agriculture class at UK.

“Me and Randall (Landon’s dad) are happy he found an old soul like him. They are perfect together,” Angela Young said. “She is a good country girl and he’s a country boy.” 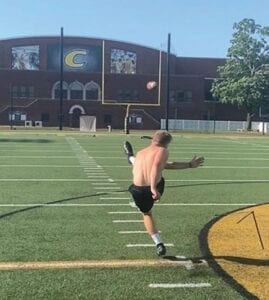 Young’s mother thinks being married will make his senior season easier for him in many ways.

“He does not have to worry about planning anything during season. He can focus on football and doing what he needs to do,” Angela Young said. “Everything has a clear path. Hopefully they will have a season and then after that he be ready to start training hopefully for the (NFL) combine or Pro Day or whatever it is.”

She’s not worried about what might happen with COVID-19 or even another injury. She’s been through those times and vows to keep only positive thoughts.

“God had a purpose for him being injured at that point in time. He grew a lot mentally, spiritually, emotionally. He learned a lot and focused on building himself physically. He did not have a redshirt year like a lot of players, so that gave him a chance to train and focus on watching film, learning technique,” Angela Young said. “It broke my heart when he got hurt but he came out stronger and there was a purpose to it.”

She’s trusting UK medical personnel and coaches to monitor the situation and knows any time a football player goes on the field there’s a chance of injury.

“He wears masks and just does his thing. He did work out at our place quite a bit (when the UK campus was closed),” Angela Young said.

Landon and his father built a weight bench, squat rack and more so he could continue to lift weights when gyms were closed.

“If you do not work out and keep your body honed, you lose it,” Angela Young said. “Both Landon and his dad love to work with wood. It was neat to see them doing things together. We know after this year that Landon may not be local (if he makes a NFL roster) and it was just nice to see him and his dad working together.”

It’s also been nice for her to see how involved in the community her son has been the last four years in a variety of ways. He was named captain of the AllState AFCA Good Works Team due to his community service work. A long-term care facility in Lexington named its dining room in honor his visits and work there the last four years.

One of the nation’s best young players, 2022 point guard Skyy Clark, called it a blessing when he got a scholarship offer from Kentucky last week just a few days after he also added one from North Carolina.

The 6-2, 200-pound guard is “one of the best playmakers in all of high school basketball” according to Rivals.com national basketball analyst Corey Evans.

John Calipari was the first coach to reach out to Clark, who made an unofficial visit to UK last season when the Cats beat Auburn, when coaches were allowed to contact recruits this summer and Calipari along with assistant coaches Kenny Payne, Joel Justus and Tony Barbee were all on the Zoom call when Calipari made the scholarship offer.

Clark moved from Los Angeles to Nashville this summer and plans to play his final two high school seasons for Brentwood Academy — unless he opts to reclassify to the 2021 recruiting class as some have speculated.

“He told us on our Sources Say Podcast that it’s 50-50 (about reclassifying),” Rivals.com recruiting writer David Sisk said. “He is going to take all of his senior core classes next year, so he should meet all of the requirements academically.

“He is not dodging the subject when asked. In fact, he is very transparent and volunteered the information. Academically and physically he should be ready to make the jump after his junior season. Personally, I lean toward him reclassifying.”

Clark averaged 24.9 points, 5.2 rebounds, 4.3 assists and 2.5 steals per game at Heritage Christian last year while shooting 50 percent overall from the field and 85 percent at the foul line.

Just how good is Clark?

Sisk watched him about a month ago in Nashville playing with NBA, international and college players including Darius Garland, Robert Covington, Ian Clark and others. Remember Clark has not yet turned 17.

“He looked as physically developed as they are. He has the body of an athlete in his twenties. He is especially thick in the trunk and shoulders. That allows him to stay low and move fluidly in a stance,” Sisk said.

“I don’t know how well he shoots yet because he didn’t have to. He got to the rim at will against those older players. I would think a high school player his age would have a hard time competing (against him).

“He has facial and leg hair, so I do have some concern that he maxed out growing early on. He’s plenty big enough now to play the point. But his doctors say he will still get to 6-foot-4. If that happens it won’t be fair.”

During his four years at Kentucky point guard Roger Harden played in 122 games, which is still tied for 37th most at UK even though Harden graduated 34 years ago.

In those 122 games, he took only 466 shots. That’s just over four shots per game even though he averaged over 20 minutes per game during his four-year career. Of his 466 shots, 2018 came in the 1985-86 season when Eddie Sutton took over as coach after Joe Hall resigned. In 86 games under Hall, Harden put up only 258 shots.

“That was not by choice. Joe B. would not let me put up shots,” Harden laughed and said.

“That is why I love Kentucky basketball fans,” Harden said. “I had a guy on Twitter who will sometimes post pictures of me with my coaches at UK.”

“I knew my job was to pass first, but that didn’t mean I couldn’t hit an open shot,” Harden, a former McDonald’s All-American, said.

It’s not often any more that a Division I kicker or punter was also a position player in high school but that’s exactly what Boyle County junior Jackson Smith plans to be.

He was offered a scholarship by Kentucky last week and is ranked as the No. 1 kicker/punter in the 2022 recruiting class by some.

“Jackson is a different kind of kid. He has a different mentality and is not afraid to stick his nose in there. He’s a tough kid and he’s got a lot stronger,” his father, Andy Smith, a former all-SEC punter at UK, said.

“Kids sometimes get so focused on getting offers rather than just enjoying playing football and helping a team and learning life lessons. Myself, I am perfectly fine with him playing other positions as well as kicking but I will admit it’s rare for a potential Division I kicker/punter to do that now in high school.”

The 5-11, 175-pound Smith could play either receiver or linebacker for new Boyle coach Justin Haddix — who has seen little of Jackson on the field in person because of the COVID-19 restrictions.

“Jackson is a football player. I have to talked to coach Haddix specifically but knowing the roster they have back I think he will be needed at receiver and maybe outside linebacker,” Andy Smith said.

“I don’t know if he will be needed to go both ways but I know they will need him on the field more than just to kick. You can get hurt doing anything, so I hate to limit him to just kicking if he’s needed on the field. And knowing Jackson, he wants to play every down if they would let him.”

Kentucky just got a commitment in the 2021 recruiting class from Australian punter Wilson Berry, who is already 23 years old. Chance Poore, the top kicker in the 2018 recruiting class, is a sophomore this year and would be a senior during Smith’s first season at UK if he picked the Cats.

“I think they are looking at that Jackson could redshirt when Chance is a senior and then be the kicker,” Andy Smith said. “The punter would also be two years ahead of Jackson if Jackson redshirted. So I think UK is focused on him as a kicker first and then a punter after Berry graduates. But a lot could happen between now and then if that’s where Jackson decided to go.”

However, his ties to Kentucky still remain strong.

“But I’ve also seen what Jed (Wills of Lexington Lafayette) did at Alabama (to become a firstround draft pick). My (high school teammate) Walker Parks is going to Clemson,” Burton said. “So you can look at what other players you know have done when they go to a school, but you have to realize it could be completely different for you.”

He’s certainly from a football family. His father, Jeff, played football at Mercer County and then Morehead. His mother, Teresa, is from Leslie County and was an academic tutor for the football team at Morehead.

“Jeff was a frequent flier (attending tutoring sessions),” Teresa Burton said. “I was raised in a house full of girls but I liked football and kept following Morehead football because I tutored a lot of those guys.

“In Kentucky, everybody grows up going to UK games. We have been season ticket holders since we got married. Our boys grew up going to Commonwealth Stadium and tailgating. They grew up on the field because their dad coached at Mercer County, then East Jessamine, then Dunbar. I have put them in their (child) carriers and off we went. There have always been players at our house. They just grew up around the game and that’s why Jager loves it so much.”

Quote of the Week: “My email and phone blew up almost as soon as our season ended. She can make a substantial living playing professionally. She was one of my favorite players because of her flair and you have a difficult time training fearlessness. Those intangibles just made her different,” UK volleyball coach Craig Skinner on what made All-American Leah Edmond so good and hard to replace.

Quote of the Week 2: “I got on a call with her and kind of talked to her about how to deal with pressure. How to deal with always wanting to do more and be more and not being satisfied,” former Oregon star and current WNBA player Sabrina Ionescu on a recent conversation with UK All- American Rhyne Howard.

Quote of the Week 3: “I had people ask me if I lifted weights but I never really did until I got to the University of Kentucky. He was way ahead of the curve in the weight room. He won a national title (in 1978) with a power game inside that nobody else had,” former UK point guard Roger Harden on coach Joe Hall’s weight training program at Kentucky 35 years ago.