Vehicles shot up in early morning hours near Isom 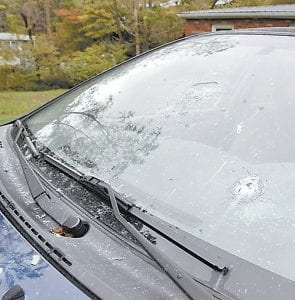 SHOT UP CAR — A 2007, navy blue Toyota Corolla owned by Dixie Hall was riddled with bullet holes after someone went on a shooting spree in Low Gap Branch of Little Colley around 1:30 a.m. on Oct. 4.

Two parked vehicles located at Little Colley were shot at several times during the early hours of October 4.

Kentucky State Police Trooper Brandon Thomas said shots were fired around 1:30 a.m., and the suspect is thought to have been riding in a small pickup truck.

Fields said she found four shell casings from a .22 caliber gun as well as two little metal fragments in the backseat of the car.

She said two bullets are lodged in the driver’s door. One bullet hit the front fender. Two went through the windshield and one went through the back window cracking the covering to the stereo system.

“There are two huge scrapings on the hood,” said Fields. “It literally brought the paint off of the hood.”

The front passenger window is completely shattered. Hall backs into her driveway, so all of the shots were fired through the front of the car.

Fields said if one of the bullets had been aimed an inch higher it would have gone through the back window of her mother’s house into a room where her mother often sits.

“What if she had been sitting in that living room?” asked Fields.

A pickup truck belonging to Hall’s neighbor, Jack Sexton, who lives two houses from her, was also vandalized.

“It needs to be known that those things are happening in our county,” said Shirley Breeding, a friend of Hall. “I don’t know what we need to do about it. Pray for one thing.”

Anyone with information about this case is asked to call Trooper Thomas at 606-435-6069.