Vessels made from patients’ cells 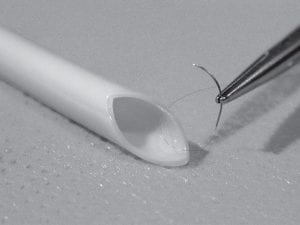 This image released by Cytograft Tissue Engineering shows a blood vessel prior to implantation, with the blue “suture” thread used to attach it to the patient’s circulation. Scientists have grown blood vessels for kidney patients from their own cells for the first time, a new study says. Other experts called the news “a revolutionary milestone” and said it could lead to doctors one day custom-producing vessels for patients with circulatory problems in their hearts or legs.

For the first time, scientists have grown blood vessels for kidney patients from their own cells, making it easier and safer for them to use dialysis machines, a new study says.

Some experts said the results suggested doctors might one day be able to custom-produce blood vessels for patients with circulatory problems in their hearts or legs, or even grow complex organs like kidneys and livers.

Todd McAllister of C ytograft Tissue Engineering in California and colleagues implanted lab-grown blood vessels into 10 patients with advanced kidney disease in Argentina and Poland from 2004 to 2007.

Dialysis patients need a vessel, or shunt, to connect them to dialysis machines. This can be made from their own vessels. But because dialysis is done so regularly, kidney patients often run out of healthy vessels and need an artificial one, often made out of gortex. Those are prone to infection and inflammation.

In the study, doctors took a small snippet of skin from patients. Cells from those samples were grown in a lab, to help them produce proteins like elastin and collagen. From those, scientists made sheets of tissue which were rolled into blood vessels 6 to 8 inches long.

The vessels failed in three of the patients, which experts said was not surprising in patients so seriously ill. One other patient withdrew from the study and another died of unrelated causes.

In the five remaining patients, the vessels worked for at least 6 to 20 months after they were implanted. Afterwards, those patients needed fewer interventions, including surgeries, to maintain the vessels than regular dialysis patients.

McAllister said he and colleagues plan to test similar devices in patients with heart and leg problems. “It’s basically a piece of plumbing to bypass blockages,” he said.

The study was published recently in the medical journal, Lancet. It was paid for by Cytograft Tissue Engineering.

“This technology is very, very promising,” said Vladimir Mironov of the Medical University of South Carolina, who co-wrote an accompanying commentary in the Lancet that praised the study as “a revolutionary milestone.”

“It’s difficult to predict what will happen next, but they are on the right track,” Mironov said. He added the same technique might be useful for people with heart, leg or hernia problems. But Mironov worried the vessels, which cost between USD $15,000 and $20,000, might be too expensive to be used widely.

Dr. Bryan Becker, president of the National Kidney Foundation in the U.S., said about half of kidney patients could benefit from these vessels if further tests confirm they work. Becker was not linked to the Lancet study.

Some experts said McAllister’s research showed we might one day be able to engineer personalized tissue and organs.

Dr. Patrick Warnke, a surgeon at the University of Kiel in Germany, who is growing patients’ tissue from stem cells, guessed we might be able to grow complex organs like kidneys or livers in two decades.

“Nature tells us there is a way to build body parts,” Warnke said. “But finding the right recipe is not so easy.”