Vet is voice of HBO’s ‘The Pacific’ 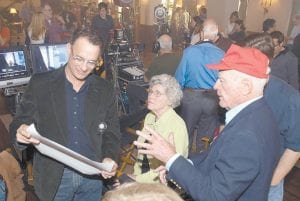 In this publicity image released by HBO, WWII veteran Dr. Sidney Phillips, is shown with Katherine Phillips Singer, center, and actor and producer Tom Hanks, left, on the set of “The Pacific.” (AP Photo)

Dr. Sidney Phillips has become the voice of the men of “The Pacific,” HBO’s World War II miniseries.

He’s the survivor among the drama’s four central figures, with the others claimed by the war or the decades that followed.

The 85-year-old physician has shouldered the task of spokesman with grace and good humor, fielding media interviews and, at the request of The Associated Press, online queries from viewers about his combat experience and life afterward.

Phillips, who was 17 when he enlisted in the Marines the day after the Dec. 7, 1941, Japanese attack on Pearl Harbor, endured four months of brutal fighting on Guadalcanal and joined in the invasion of another Pacific theater island, New Britain.

He returned to Mobile, Ala., where he raised three children with his wife, Mary, who died in 2000.

“The Pacific,” with actor Ashton Holmes as the young Pfc. Phillips, debuted March 14 and airs new episodes at 9 p.m. Sunday through May 16. Phillips answered questions by phone from his home.

Q: What is your best memory of that chapter of your life, and what is your worst?

“I really think the worst memory were the living conditions — the standing in line for two tablespoons of beans and a tablespoon of corned beef for four hours on a troop ship. … There were two meals a day, and that went on for weeks and weeks and weeks. Then, when we got ashore, we had a whole regiment, which is 3,500 men, with dysentery, diarrhea and no toilet paper. If there hadn’t been an ocean there, we would have been in serious trouble.”

Q: Do you feel your experiences as a Marine shaped the rest of your life, and if so, how?

“Oh, absolutely. I was a 17-yearold boy right out of high school with no strong discipline in my life, and the Marine Corps does that, it puts discipline in your life. You quit whining about this and that and the other thing and you focus on whatever has to be done and you do it, really, for the rest of your life.”

Q: If such a devastating attack like Pearl Harbor were to happen today, could our young people rise up to the challenge as your generation did?

Phillips: “I believe they would. I certainly hope they would. People ask me frequently what do I think about the series in general, ‘The Pacific,’ and I say I hope it will revive patriotism and bring back teaching history to the young people, and what a wonderful country it is and how much blood it has taken to bring us to where we are.”

Q: As someone who served at such a vital yet devastating time for our country, how do you see the United States’ involvement in the Iraq and Afghanistan wars and President Obama’s long-term plan to end it? Also, would you serve in this war, enlisting likewise immediately after 9/11?

Phillips: “Today, the war seems to be conducted by the politicians. I think they need to turn the war back over to the military. … I would enlist. It disciplined me and gave me purpose in life.”

Q: “When the Japanese were bombing the trenches before attacking, how did men protect themselves? What were your thoughts during the bombardment and right before you knew they were going to attack?

Phillips: “We tried to dig all the way to the center of the Earth, mostly. We would just hunker down and pray and hold on and hope the next round was not yours. Pray and hold on; that’s all you could do.”

Q: What helped keep you going and on mission throughout the war?

Phillips: “There’s a number of answers you could give, but the one that is foremost in my mind is your trust in one another, support of one another, your dependence upon one another.”