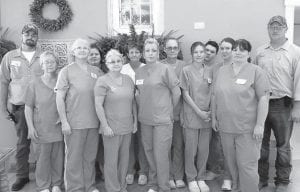 In honor of National Environmental Services Week , Letcher Manor provided its housekeeping, laundry and maintenance staff with a dinner and a gift of appreciation. Letcher Manor officials said, “We are truly honored to have such a great team who is dedicated in making our environment clean. Thank you for the difference you make each and every day!”

Former Carbon Glow resident Luther Adams, 82, of Morehead, visited Washington, D.C. on August 27 with a group of 42 other military veterans from World War II, the Korean War or the Vietnam War.

The group attended the changing of the guard at the Tomb of the Unknown Soldier in Arlington National Cemetery, and toured war memorials including the Marine Corps War Memorial, the Air Force Memorial, the World War II Memorial and the Korean War Memorial.

Adams, who was an aircraft mechanic on B-36 bombers in the Air Force, was joined on the trip by his granddaughter, Shelby Adams.