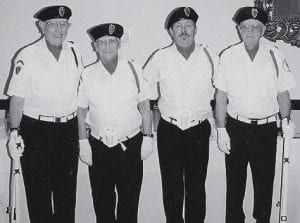 COLOR GUARD – The Color Guard of the Midwest Chapter of the 36th Infantry Division Association performed its duties at a memorial service during the group’s annual reunion in June. Pictured are (left to right) H.D. Caudill, commander, and Gerry Groneman, flag carrier, both of Kentucky; Jeff Reeves, flag carrier, of California; and Arlis Sizemore, rifle carrier, of Indiana. Caudill has been commander of the Color Guard since 1995.

The Midwest Chapter of the 36th Infantry Division holds its reunion each year in June in whatever state the current President resides. We have held them as far north and west as Minneapolis and St. Louis and as far east and south as Albany, N.Y.; Asheville, N.C.; Pigeon Forge, Tenn.; and Louisville. This year it was held in Rockford, Ill., which is almost on the Wisconsin border, northwest of Chicago.

This June, I (a member of the 36th Infantry Division during World War II), my wife Edna, daughter Lonna Ann (residents of Jeffersontown), son Michael Alan and his wife Marcia of Carcassonne, were attendees at the three-day get-together. We went up a couple of days early in order to explore points of interest along the way that one does not usually get to see when passing through to reach a destination.

After checking into our hotel, settling in with the unpacking, we had a nice dinner and turned in for the night to get an early start for the next day. We decided to drive into Wisconsin to see what it had to offer and of course to get some cheese from the source! We were delighted to discover an angel museum in Beloit, which has 20,000 angels ranging from thimble-size to life-size. Of course the ladies visited the gift shop. After leaving there, we found a cheese place and all chose their type of cheese. 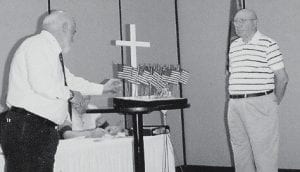 FIELD OF HONOR – Michael Caudill of Carcassonne, places a flag in the Field of Honor for his uncle, the late Beckham Caudill, at a memorial service at the reunion of the Midwest Chapter of the 36th Infantry Division Association.

The President and his staff for the current year had an interest- ing program planned for the members and their families. On June 8, we were bused to a Swiss restaurant to have a traditional breakfast, which was different but delicious. Of course the gift shop had unusual things such as work stocking monkeys from doll-size to giant and kits to make them.

After breakfast we were bused to the Japanese Gardens. We were told they must have water, stones, and trees, which were everywhere. All of the paths in the garden are crooked as it is believed that evil travels in a straight line. We visited a tea house, a reflection pool, and a guest house. Everything was so very clean. There was also a gift shop!

From there we went to a Military Field of Honor where lifesize statues were displayed in the uniforms of servicemen and nurses of the different wars in which the U.S.A. has been involved. We took a few pictures and returned to our bus to be taken back to the hotel to rest before dinner. We ate dinner, which was sponsored by the Ladies of the 36th, in the ballroom that night and were entertained by a very talented group of players.

The next morning, we ate a buffet breakfast in the hotel and were then bused to a reconstructed village with all the buildings having been used from 1900 up to 1940. We had leisure time to explore them and saw a bank with bars on the teller windows, an old-fashioned store with stick candy two for 25 cents. a hospital still equipped for the time period, a church, and even a blacksmith shop.

All of our meetings were held in the hotel there and then there was a picnic lunch in the small park. The bus returned to the hotel at 1 p.m. so we could have some free time before boarding again to go to a U.S.O. building and war museum for dinner and entertainment by a Big Band sound band, which was popular during World War II.

On June 10, the memorial service was held in one of the ballrooms after breakfast. The Color Guard posted the colors, prayer was held, and then the names of the fallen comrades were read and a flag was placed in the Field of Honor as each name was called.

Michael placed a flag in remembers of his uncle, Beckham Caudill, who was a World War II veteran and answered the call in March of this year. The Color Guard then retrieved the colors as dismissal was called after prayer.