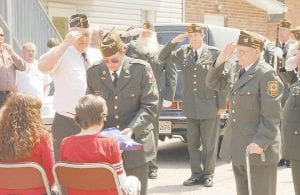 VICTIM HONORED – War veterans presented the grandchildren of murder victim Ralph Marcum with the flag that draped Marcum’s casket during a special ceremony after his funeral on April 17. Two men and one woman accused of murdering the 70-year-old Fleming-Neon man were scheduled to appear at preliminary hearings this week in Letcher District Court. (Photo by Chris Anderson)

The three suspects charged with murdering an elderly Letcher County man are also accused of burglarizing his apartment in Fleming- Neon after dumping his body in Pike County.

The accusation concerning the burglary is expected to be repeated this week during preliminary hearings for the two Piggs, both 37, and the 31-year-old Collins. The charge is contained in affidavits filed in support of warrants authorizing the search of Marcum’s residence at Goose Creek Apartments and his 1991 Toyota Camry automobile. The warrants, obtained shortly after Marcum’s body was found, also authorized police to confiscated the clothing being worn by the Piggs, who are cousins, and Collins. 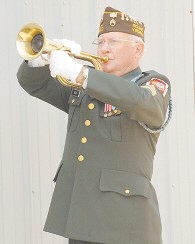 A bugler played “Taps” during a military funeral for murder victim Ralph Marcum.

According to the affidavits, police got a break early in the case when Collins, of Millstone, was found walking along KY 317, between Neon and Long Fork.

“While being questioned by KSP Sgt. R.B. Engle, (Collins) advised that she was present when Ralph Marcum had been murdered at the residence of Lloyd Pigg by Lloyd Pigg and Johnny Pigg, and that she had accompanied them when they disposed of his body by transporting Mr. Marcum’s body in his own vehicle to Virgie,” the affidavit says. “She then took the officers to the location where the body of Mr. Marcum was discovered.

“Visible blood stains were observed on her clothing and she admits to being present during all of the above,” the affidavit continues.

Knowing that Marcum had been ing for Marcum’s silver Toyota, which they found soon thereafter being driven by John Pigg near the mouth of Thornton. John Pigg attempted to flee, but was arrested after he wrecked Marcum’s car on U.S. 119, near the entrance to Fishpond Lake. Though Marcum crashed into an S.U.V. occupied by a man and his pregnant wife, there were no serious injuries.

“Further investigation indicates that (Marcum’s) body was transported in the 1991 Toyota automobile from the residence of Lloyd Pigg to the location (where) Mr. Marcum’s body was discovered,” the affidavit states. “The automobile appears to have visible blood stains as do the clothing of Johnny Pigg. Lloyd Pigg was also located and taken into custody. The pajamas worn by Lloyd Pigg appear to have visible blood stains.”

The affidavits also reveal that the investigation into Marcum’s death began at 5:43 a.m. on April 12 when the mother of Lloyd Pigg called Jenkins City Police to report finding “a large amount of blood” in a small building where Pigg had been living beside her house on B&O Hill in Jenkins. State police were called to assist after Marcum’s wallet was found in the building.

Included with the search warrant affidavits are descriptions of items police have taken from Marcum’s apartment and automobile in hopes of finding “trace evidence” that may further link the Piggs and Collins to Marcum’s murder.

Among the items taken into custody are a telephone cord, a brown leather address/telephone book, a 2007 Bell South phone directory for Letcher County, and a number of empty bottles that once contained pills prescribed to Marcum and his late wife, who died in March.

Funeral services for Marcum were held in Fleming-Neon on April 17.